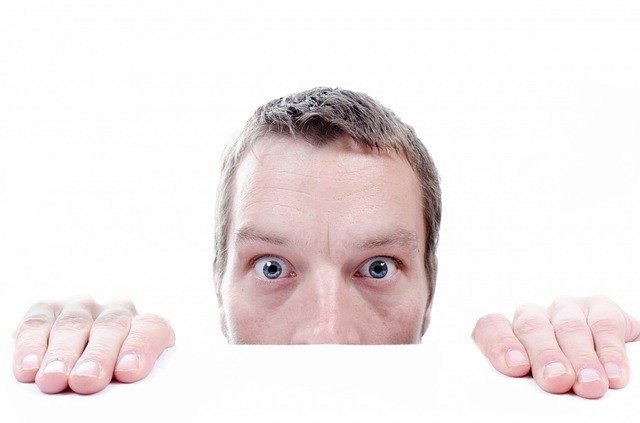 When you’re done with this article, you’ll be able to recognize the facial expressions of fear and surprise and distinguish between them.

The facial expression of fear

In fear, the eyebrows are raised and drawn together, often producing wrinkles on the forehead.

The upper eyelids are raised as high as possible, opening the eyes to the maximum. This maximum opening of the eyes is necessary because when we’re afraid, we need to assess the threatening situation fully so we may choose the best course of action.

When the eyes are opened to the maximum, more light can enter the eyes, and we can see and assess the situation more effectively.

Lips are stretched horizontally and backward towards the ears. The mouth may or may not be open, but the lip stretch is conspicuous. The more intense the fear, the more the lip stretch, and it’ll last longer.

When someone says something awkward in a social situation, you may notice a slight and brief lip stretch on their face.

Chin may be pulled back, a common gesture observed when a person feels threatened.

In the above image showing an intense fear expression, the woman has raised her eyebrows and drawn them together. This has produced wrinkles on her forehead.

She has opened her eyes to the maximum, with her upper eyelids raised as high as possible. Her lips are stretched horizontally towards the ears. She has probably pulled her chin is pulled slightly backward, as inferred by the horizontal wrinkles on the neck.

The above is a less intense facial expression of fear someone may show when they see or do something awkward. The woman has raised her eyebrows and drawn them together, producing wrinkles on her forehead.

She has opened her eyes to the maximum, with her upper eyelids raised as high as possible. Her lips are stretched, but slightly.

The facial expression of surprise

As pointed out earlier, the facial expressions of fear and surprise are very similar and can cause confusion.

There’s a subtle difference between the fear and the surprise expression. In surprise, as in fear, the eyebrows are raised and the eyes are opened to the maximum.

However, in surprise, the eyebrows are not drawn together as in fear. In some people, horizontal wrinkles may be seen on the forehead. These are produced by raising the brows only and not bringing them together.

So they may look slightly different from the fear wrinkles produced when the eyebrows are raised as well as drawn together.

As a rule of thumb, in fear, the eyebrows are flattened while in surprise, they’re curved.

Another distinguishing factor between the fear and surprise expressions is that in surprise, the jaw drops, opening the mouth. The lips are not stretched horizontally as in fear. The opened mouth is sometimes covered by one or both the hands in surprise.

The man in the above picture shows a surprise expression. He has raised and curved his eyebrows but not drawn them together. He has raised his upper eyelids as high as possible, opening the eyes to the maximum. His mouth is open but not stretched.

The more intense the facial expressions of fear and surprise, the more easily you can distinguish them.

Sometimes, a situation might trigger both fear and surprise in a person and the facial expressions might get mixed. You may notice that the mouth is wide open, but the lips are stretched, too.

Other times, the intensity of the facial expression may be so low, that it’s impossible to tell whether it’s fear or surprise. For instance, the person may just raise his upper eyelids with no noticeable change in other facial areas.