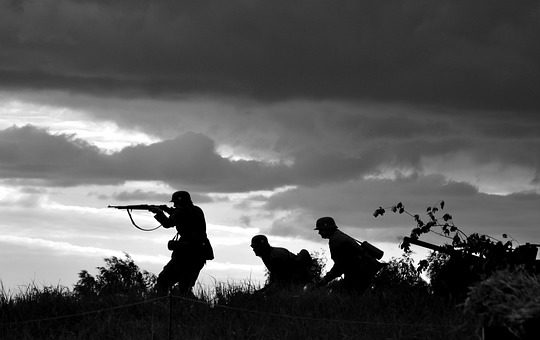 Why do some people sacrifice their lives for others?
What’s the psychology behind self-sacrifice?

Humans are genetically programmed to seek survival. Having a psychology that promotes self-sacrifice doesn’t make much sense, at first glance.

In A Tale of Two Cities, a famous novel by Charles Dickens, two men named Charles Darnay and Sydney Carton fall in love with the same woman- Lucie. Charles Darnay, however, gets the girl, marries her and has a child with her.

When Darnay is arrested to be executed on the guillotine amidst the French Revolution, Carton heroically rescues him and sacrifices his own life so that Darnay, Lucie, and their child could live happily together ever after.

Why people sacrifice their own lives for others is an evolutionary puzzle. After all, survival and reproduction of an individual’s own genes is the first priority. One wants the best for one’s own self.

However, we humans live in societies where we need to cooperate to gain favours from other people. Winning the cooperation of others benefits the self, and those who don’t cooperate are at a disadvantage compared to those who do.

Cooperating largely means engaging in tasks that you might not ideally want to do, tasks that are costly for you. The ultimate cost is sacrificing what’s most valuable to the self- one’s own life.

Hamilton’s rule and the psychology of self-sacrifice

In simple words, you’re more likely to help your father, mother, sister, or brother than your uncle, aunt, or cousin and even less likely to help a random, unrelated stranger.

In evolutionary biology, this is known as Hamilton’s rule and has been confirmed across the animal kingdom.1

Obviously, the degree of help translates to the degree of self-sacrifice. People are more likely to sacrifice their lives for their closest kin because in doing so they’ll be indirectly benefiting their own genes.

Single-celled algae commit suicide by programmed cell death in a stressful environment, releasing nutrients that can only be used by relatives and has an inhibitory effect on the growth of other species.2

Such altruistic suicide is also observed in other eusocial (highly organized and cooperative) species such as shrimp, mole rats, bees, and ants. Humans are also considered eusocial species, given our high degree of organization and cooperation not seen in other primates.

If sacrificing your own life can help one of your close kin, you’re likely to go for it. It’ll still be a tough decision to make due to the ridiculously high cost involved. But circumstances can arise where this type of sacrifice can become a viable option.

This is the common pattern you’ll observe in instances of self-sacrifice. The chances of survival and reproductive success of the person who does the sacrifice are small, at least in his own mind, compared to those he gives up his life for.

For example, the movie A Simple Plan tells the story of a brother whose own chances of reproduction were slim (he had no girlfriend or wife) compared to his sibling (who had a wife and a very young child) for whom he sacrificed his life.

What about people who sacrifice their lives for their community, country, ethnicity, religion, etc.?

Community, country, ethnicity, religion, etc. can be thought of as extended families. Though not all people in your country will be closely related to you, there’s a good chance that they’re more related to you than, say, people from a different country.

Thus, when a soldier sacrifices his life for his country, he knows he’s doing it for his own kin. When a suicide bomber lays down his life he’s doing so for the benefit of his extended family, which in this case might be his community.

This is why people within a country and community refer to each other as “brothers and sisters”, even if they’re not related. It exploits our psychological mechanisms to help, cooperate and bond with our closest kin.

Is it possible to sacrifice one’s life for a complete stranger? Or maybe a friend to whom one’s not related?

The answer is that it’s highly unlikely but possible, except in some very extreme and rare circumstances.

The key point to remember is that Hamilton’s rule still holds. Humans have relatively little genetic diversity compared to most mammalian species. One reason for this is that our species is very young and evolution hasn’t had the chance yet to create much diversity within our species.

Consequently, if we help a complete stranger or an unrelated friend, there’s still a chance that most of our genes will get to the next generation. So yes, sacrificing oneself for an ‘unrelated’ person can happen but it’s very rare and demands very special circumstances.

For example, if you and your spaceship crew are abandoned on another planet while on a mission and the only way your crew can get back to Earth is by letting you die, there’s a good chance you’ll consider doing it.

When your crew gets back to Earth, they’ll reproduce and carry many of your genes to the next generation. The unappealing alternative is that all of you die on the uninhabitable planet.

Often, when a person sacrifices his life for people he’s not related to, he ends up saving the lives of many other people. So, if there are many people you can save by offering your life, then the cost/benefit calculation of making the self-sacrifice tips more toward the benefits side.

If many people live and reproduce, it could mean slightly greater reproductive success for your genes than if they don’t. It’s still not better than being able to directly reproduce and know for sure that one has been reproductively successful, but certain special circumstances can indeed convince us that it is.

Almost always, sacrificing one’s life for unrelated people happens when there’s very little (approaching to zero) probability of one’s own survival and reproduction or one has already successfully reproduced and his life has little value compared to the people he’s saving.

The siege of Leningrad

During the siege of Leningrad, when millions of people starved to death in Russia, scientists at the Pavlovsk seed bank were surrounded by things they could eat. But they chose not to eat anything. They chose to starve to death instead.

This is a powerful example of the psychology of self-sacrifice in action. To understand this inspiring sacrifice, consider what would’ve happened had they chosen to eat and live. The environment was still harsh. Even if they lived, it was unlikely that their children would under the cruel siege.

So they knew (unconsciously) that their attempt to survive and reproduce would fail, anyway. Thus, they chose to conserve food that future Russian generations could make use of, hopefully in a more conducive environment to their reproductive success.

A recent study published in Nature showed that shared negative experiences are a powerful mechanism for promoting prosocial behaviours, which under certain conditions can be extremely costly to the individuals concerned. Under such conditions, having a shared evolutionary future is likely a more decisive factor in self-sacrifice than shared ancestry.3

When Sydney Carton was about to be executed on the guillotine in A Tale of Two Cities, he was happy and considered his self-sacrifice to be far better than anything he’d ever done in his life.

Note that his prospects of reproductive success were low (he’d already lost the girl) and he considered himself to be a worthless drunkard, perhaps unlikely and unworthy of attracting a potential mate. His low value of his own life and his reduced reproductive prospects made him do what he did to the point of actually being proud and happy about it.