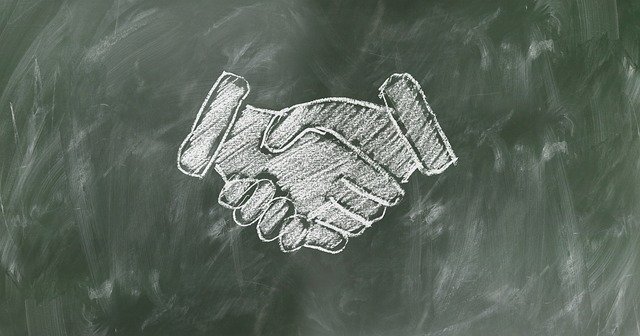 When people shake hands, they don’t just shake hands. They also convey attitudes and intentions. In this article, we’ll explore the different types of handshakes and what they mean.

Long time ago, when humans had not yet developed a full-fledged spoken language, they communicated mostly through grunts and body language gestures.1

At that time, hands were like the vocal cords of nonverbal communication because many gestures involved the use of hands. It may be for this very reason that the brain has more neural connections with the hands than with any other part of the body.2

In other words, before we developed spoken language we talked with hands. That’s why hand gestures comprise so many of the non-verbal signals we use today. A very well-known and frequently practiced among these is ‘the handshake’.

Why we shake hands

There’s a theory that modern handshake is a refined version of an ancient practice in which people grabbed each other’s arms when they met. They then checked each others’ hands to ensure that no weapons were being carried.3

The arm-grabbing then turned into hand-grabbing in which one person clasped the other person’s hand in an ‘arm-wrestling’ type position, commonly observed in gladiators of the Roman Empire.

The current version is less aggressive and is used in all kinds of meetings, be it business or social. It helps people ‘open up’ to each other. It conveys the message: ‘I carry no weapons. I’m harmless. You can trust me. We’re on good terms.’

The direction in which your palm faces, while you’re shaking hands, can have a significant impact on the meaning it conveys.

Now you know where the expression ‘gaining the upper hand’ comes from.

A neutral handshake in which both the hands are vertical and do not tilt sideways to any degree signals that both the people involved desire neither dominance nor submission. The power is divided equally between the two.

When couples walk hand-in-hand, the dominant partner, usually the man, may walk slightly ahead. His hands may be in the upper or frontal position while the woman has her palm facing forward/upward.

When political leaders shake hands, this game of dominance becomes even more conspicuous. A leader who wants to be seen as dominant may try to appear on the left side of the photograph. This position allows him to shake hands in the dominant position.

Palm displays are always associated with honesty and submission. A person who talks with frequent palm displays is more likely to be perceived as honest and truthful.

You’ll see people displaying their palms during a conversation when they’re admitting a mistake or verbalizing their authentic emotions.

By displaying the palms, the person is non-verbally saying: ‘See, I have nothing to hide. I’m carrying no weapons’.

Note that while issuing orders, commands, or firm statements, you shouldn’t display palms facing upward because even though it signals honesty, it also signals submissiveness.

People are less likely to take your commands seriously if you accompany them with this gesture.

Conversely, statements made with palm facing down are viewed as more serious and force people to perceive you as a person of authority and power.

A dominant person will exert more pressure and so their handshaking will be firmer. Since men compete with other men for dominance, when they receive a firm handshake they increase their pressure to bring themselves on an equal footing. They might even exceed the pressure of their competitor.

Since women rarely compete with men for dominance, they receive the firm handshake from men with no counter-measure.

A soft handshake is essentially a feminine characteristic. When a woman at an important business position shakes hands softly, others may not take her seriously.

Whether you’re a man or a woman, to create a strong and serious impression through your handshake, keep it firm. A study found that participants who shook hands firmly during mock employment interviews were likely to get hiring recommendations.4

When someone gives you a ‘dead fish’ handshake, you’re less likely to trust that person. You might feel that the person is not interested in you or isn’t happy to meet you.

However, remember that some artists, musicians, surgeons, and those whose work involves the delicate use of hands are often reluctant to shake hands.

When they’re forced into it, they might give you a ‘dead fish’ handshake to protect their hands and not because they aren’t happy to meet you.

It’s a favourite of politicians because they’re desperate to appear trustworthy. Businessmen and friends also sometimes use this handshake.

When the double-hander is given to you by someone close to you, you feel good and might even return it by placing your other hand over their hand.

But when someone who just met you or whom you barely know, gives you the double hander, ask yourself, ‘Why does he want to appear trustworthy? What’s in it for him? Does he want votes? Is he desperate for the business deal?’