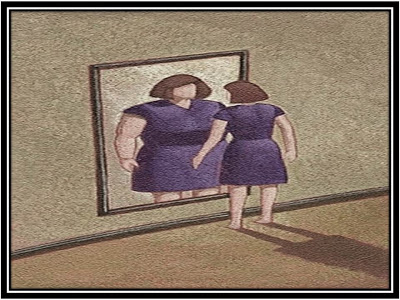 Our self-image is how we see ourselves. When someone has a distorted self-image, it means how they see themselves is inaccurate. Our self-image or self-concept not only includes our physical appearance but also the beliefs we have about our own abilities, talents, values, etc.

However, in this article, my focus will be on physical appearance. People with distorted self-image have a distorted perception of their own looks.

To clarify this concept, I want you to go through the following two stories:

Sarah had an accident recently that resulted in some stitches on her forehead. When the stitches were removed, she had slight stitch marks that were barely noticeable.

One day, at a party, someone asked her about those marks.

When she went home that day, she checked the marks in the mirror for hours. She had thought they were barely noticeable. Turns out she was wrong. The marks were huge and glaring.

She had trouble sleeping that night as she was constantly worried about the marks. When she was getting ready for work the next day, she made an extra effort to hide the marks using make-up, something she had never done before.

Max was the most famous plastic surgeon in town. It was this reputation that had brought Cindy under his knives.

She had long been suffering because of her big nose. She’d thought of going under the knife a long time ago, but didn’t muster enough courage until today.

The surgery went smoothly and Max was able to give Cindy just the kind of nose shape she wanted.

When the surgery was over, Max was excited to show her the mirror- he felt like Michelangelo. But as soon as Cindy saw her face in the mirror, she didn’t react as Max had expected. Instead, she wore a disappointed expression on her face and said:

“I look just the same as before- you didn’t do a thing.”

Max did everything he could to prove to her that the surgery was successful. He showed her before and after photos, but to no avail. Cindy still thought her nose looked big.

Many plastic surgeons have had similar experiences. Studies show that people suffering from Body Dysmorphic Disorder (BDD), who have distorted self-images, tend to be dissatisfied with cosmetic surgeries.1

People with a negative or distorted self-image have a distorted mental picture of their own looks. Even if they look fine physically, their brains deceive them into believing that there’s something wrong with their looks.

In other words, they don’t see the reality of their looks, but only a distorted version of it. Note that they’re not just irrationally complaining about their looks, their eyes are lying to them, too.

Our beliefs and emotional states can distort the way we see reality. Ever mistook a piece of rope for a snake? Most probably, that happened because you fear snakes.

After watching a horror movie, people’s minds create ghoulish images out of harmless objects they see around them.

Once, while returning home in the evening, I noticed a stray dog just outside our main gate sitting there comfortably. I had to shoo it away so I could enter my house. This happened for three consecutive days.

The dog was no longer there from the fourth day onward. Yet, when I walked on that street toward my house, my mind created the image of the dog for a brief moment.

In my mental image, the dog sat in the same position as I had seen it sitting in for the past three days. Only a careful look told me that there was no dog there.

This happened for a few days and ended when my mind was ‘fully convinced’ that there wasn’t any dog there.

I should mention that I have had a traumatic experience with a dog when I was a kid, so that may have contributed to this faulty perception.

The point is: our mind does what it can to protect us from danger, even if it means creating false images and misperceptions. It errs on the side of caution so we can take action beforehand to avoid any possible danger.

When my mind showed me a dog where there was none, it was warning me so I could be better prepared to handle the situation.

When the mind lies about looks

Such distortions not only happen with external objects like dogs or ropes but also with our own looks.

A person who fears growing old may see himself older in the mirror than he actually is. There are countless examples of women who see themselves as fatter than they actually are.

Have you noticed that you look a bit different each time you look in the mirror throughout the day?

Many people come home from work, school, or college and look at the mirror, thinking, “Gosh! Is that how I looked all day?”

If you happen to look in the mirror right after you do something great, such as lifting a heavy weight or winning a game, you’ll notice you look amazing.

On the contrary, when you’re down, feeling defeated or depressed, you’ll look at an ugly face in the mirror. It’s nothing but your mind playing tricks on you. Studies confirm that depressed people negatively distort their body images.2

When you have a negative, distorted self-image, you don’t see reality as it is. You filter everything out that might challenge your belief, and you see everything that supports it.

Every day, you find lots of clues that support the false mental picture that you have of yourself.

When you look in the mirror, you’ll only focus on those body parts or facial features that you believe are ‘defective’. These ‘flaws’ appear more defective and conspicuous than they really are.

At the same time, you’ll forget about the many nice features that you may have. Your conviction of having a poor self-image will become stronger and stronger every day unless you let go of your false mental self-image.

How to improve self-image

As you might have noticed in Sarah’s story, the way our minds cause us distress is by turning a molehill into a mountain.

Yes, there were marks on Sarah’s forehead, but they were barely noticeable. They didn’t negatively affect her overall looks. Yet, her mind tried to convince her otherwise. Her worry and false belief grew till she was forced to do something about it.

That seed (comment) that got planted into her mind at the party turned into a full-fledged belief, a conviction.

The first thing a person suffering from a negative self-image should do is try to stop the brain in its tracks when it’s trying to amplify the false belief. If you think your nose is too big, ask yourself: What proof do I have that my nose is too big?

One comment at a party doesn’t cut it. How many people have commented on your big nose? Have people found you unattractive because of your nose?

Take pictures of your nose from all angles and save those in your phone where your nose doesn’t look that big. Use these pictures to reassure your mind that your nose isn’t that big. The mind believes pictures better than any logic.

If people continue to find you attractive despite your ‘big nose’, there’s a good chance your nose isn’t interfering with your attractiveness.

Be mindful of the mind’s tendency to make a problem appear bigger than it actually is.

What’s all the fuss about, anyway?

As with so many other things in human behaviour, it comes down to reproduction. Your mind distorts your self-image to warn you that you’ve become unattractive. If you’re not attractive, you have trouble making friends and finding mates.

Essentially, the mind cares about looking good so much that even a slight, insignificant flaw in one’s looks is frowned upon.

People with BDD become obsessed with their looks. It’s like their mind goes into overdrive. They worry about their flaw all the time and constantly compare themselves to others.

Someone who thinks their nose is too big will fixate on others’ perfect noses. Someone who hates their skin color can’t help but notice the perfect skin color others have.

Needless to say, distorted self-image can ultimately lead to depression, and a long term tendency is even related to suicidality.3

Looking good is such serious business for the mind that failing to achieve makes it drive people to the point of depression and suicide. The mind cares about reproduction more than it cares about happiness or even survival.

Don’t think that just because you’re free from distorted self-image and BDD, your mind isn’t fooling you. Research has shown that people perceive their own beauty to be greater than what others say about them.4

Your mind cares about looking good so much that it lies to you, telling you that you’re more attractive than you really are. When one small thing goes wrong, your mind tips over to the other side and becomes defensive. Your mind loses its mind.