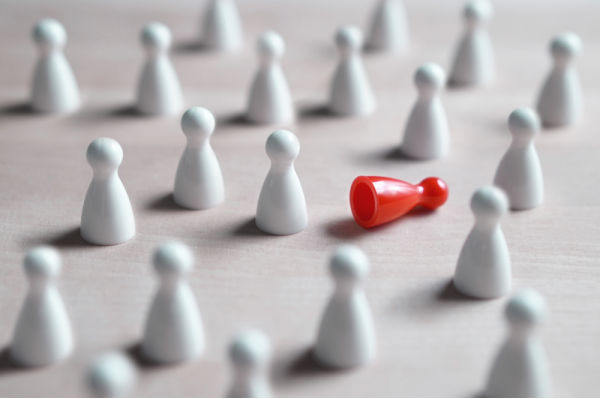 Humans are a social species that evolved to live in tightly knit, genetically related groups. Early humans highly depended on their groups for survival. Being shunned by one’s social group likely meant death.

Therefore, humans have developed psychological mechanisms to be sensitive to the signs of shunning. They seek to conform to their group and avoid non-conformist behaviors that are likely to get them shunned.

Also, they experience psychological pain when they’re shunned. The pain that people experience upon being shunned has been termed social pain.

Interestingly, physical pain and social pain are experienced as the same in our brains.1

Shunning can be as simple as avoiding eye contact to as extreme as being exiled from one’s home country. It can occur at the level of interpersonal relationships to the level of one’s social group. The silent treatment that relationship partners give each other is a form of shunning.

However, in this article, when I talk about being shunned, I’m referring to being shunned by one’s social group.

Why do people get shunned?

Shunning is basically a group’s attempt to protect and preserve itself. Ancestral human groups had to protect themselves from other human groups and predators. The stronger and more united a human group was, the better it could protect itself.

Ancestral human groups were largely based on genetic relatedness or genetic similarity. Individuals were motivated to help those who were related to them because, by doing so, they were helping the reproductive success of their own genes.2

The simplest way to tell if an individual belonged to the group was by looking at their physical similarity to other group members.

If someone looked too different, they were probably from another, genetically unrelated tribe. They were an outgroup. And human groups had to protect themselves from outgroups.

The different-looking individual would’ve gotten shunned because they were perceived as a threat to the integrity of the group. They were “other genes” trying to infiltrate one’s own gene pool.

The same thing happens today at so many levels. People who look different and belong to groups different from one’s own are stigmatized, discredited, and shamed. Racism and nationalism being glaring examples.

Physical similarity is just one among many similarity criteria that hold groups together. Groups that live together also had to be psychologically similar. They had to share the same beliefs, values, norms, and traditions.

Anyone who deviates from the norms of one’s social group is communicating:

By doing this, they’re threatening the group and inviting ostracism.

In this scenario, shunning can be used as a means of social control. The person being shunned is effectively being told:

How to handle being shunned

At best, a person who’s shunned is ignored or socially boycotted. At worst, they may be subjected to acts of violence.

A lot depends on what part of the world you live in. In freer countries, there’s more freedom for a person to be as different as they want from any of their social group. In the not so free countries, social exclusion can have dangerous consequences.

Within a group, people are usually nice and warm to each other. Their warmth scores for each other are all positive. They all tend to look the same, think the same, and behave the same. This instills in them a feeling of belonging and security.

If the person continues thinking differently and poking holes in the group’s norms, their warmth score drops to zero. At this point, they might get socially boycotted. They’re seen as a threat to the group- an outgroup.

Of course, when you’re seen as an outgroup by your group, you’re going to see them as outgroups too. This creates a breeding ground for mutual hostility.

Social exclusion creates anger, fear, and anxiety in the excluded individual and they may resort to aggression. They’re likely to become increasingly offensive to the group. Their warmth score becomes negative.

The group will probably retaliate with aggression. This creates a negative cycle whereby the person’s warmth score keeps becoming more and more negative. Then comes a point where the group will have it no more and commit an act of violence on the person.

When you hear instances of assassinations and mob lynching, they’re not usually one-off events. Many small preceding events lead to that event. The pot had been boiling for long. What you see is the dramatic overflow.

If you’re someone caught in this negative cycle and don’t live in a free society, I highly recommend you nip the evil in the bud.

Stop offending your group immediately. And turn a blind eye to the offense and aggression that they subject to you. Remove people from your life who gave you hate for thinking differently. Block them on social media. They’re only going to drop your warmth score more and more.

With time, things will settle down. Your warmth score will become less negative and eventually climb to zero.

When your warmth score is zero, you’re in a relatively safer position. Now you can think clearly.

Basically, you have two options. You either re-join the group or you find another group to join.

I understand that not all people have the freedom or the means to join a new group. You may be forced to stay in your group. But to do so, you need to cease showing them you’re too different from them.

In fact, to make your warmth score positive, show them you’re like them.

– Robert Greene, The 48 Laws of Power

I’m all for being different and rocking the boat, but there’s a limit to how far you can go. Make sure you don’t rock the boat so much that it tips over and ends up drowning you.

Sometimes you have to do the smart thing. Share your uniqueness with those who’ll appreciate it. Don’t throw your pearls before swine.

Find a group that’s in alignment with your values and beliefs. Luckily, in today’s world of the internet and social media, you can always find communities you can resonate with. This largely counteracts the negative effects of social exclusion.

Studies show that positive social interactions with even one other person can dissolve the negative effects of social exclusion.3

No matter how much conviction you have in your beliefs and values, the simple fact of life is that you can’t expect others to think like you. If you live in a society where freedom of thought is appreciated, great. You probably already have a decent level of tolerance for differing thoughts.

If you don’t like the values and traditions of your society, ask yourself if it’s worth trying to change people’s minds. Changing people’s minds is not an easy thing to do- a near-impossible feat. Is it worth the potential costs associated with trying to do so? If yes, good luck! If not, I’m sure you have better things to spend your time on.