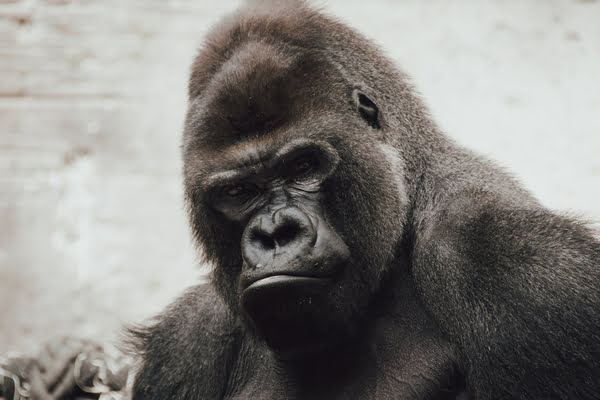 Human beings are sensitive to social hierarchies. They want to know their status in their group and the status of their group members. Therefore, when people interact with others, some questions naturally run in their heads, such as:

It’s because high-status people have greater access to resources. They have wealth and connections. By staying in their good books, one has a lot to gain.

Because gauging the social status of people is so important, we do it based on minimal non-verbal cues.

Most of the time, you don’t even have to talk to someone to know their status. You can judge their status based on their possessions, clothes, and non-verbal behavior.

Our ancestors gained high status mainly through the accumulation of resources. They accumulated resources mostly via dominance and the formation of alliances. Might has been right for most of our evolutionary history. This is why dominance and high status go hand-in-hand.

Since the accumulation of resources is more important for the reproductive success of men than of women, we usually see men striving for social status and displaying dominant behaviors.

This article will lay out almost all the dominant body language signals for you. The goal is to inform you what those signals are so you can use them strategically to create the impressions you want.

Also, knowing these signals will help you respond to them effectively.

That said, there are some common themes that you’ll find over and over in dominant body language examples. Knowing these themes provides a context for you to understand and remember the different body language signals of dominance. These themes are:

Dominance is primarily about exerting control over people, things, and the environment. The more dominant a person, the more power and control they have.

As is the case with many other animals, size matters when it comes to dominance. Larger organisms can easily overpower the smaller ones. When smaller animals encounter the larger ones, they often submit without a fight and without risking their lives.

Making yourself appear bigger is therefore used by humans to intimidate others and dominate them. It communicates:

“I’m bigger than you. You better back off before I hurt you.”

Dominant individuals reflect openness in their body language because they have nothing to hide. Closed body language communicates defensiveness and fear. It’s an attempt to protect one’s vital organs from attack.

“I’m not engaging with you by looking at you. You’re beneath me.”

Imagine you go to your boss’s room to ask them something. They barely look at you when you talk to them and keep staring at their screen. They’re communicating:

“You’re not important enough for me to engage with you.”

When you pull your head slightly up by raising the chin, you show you’re not afraid to expose your neck, a vulnerable part of your body. Another reason this communicates dominance is that it lets you ‘look down on others’ because your eyes are raised too.

If you’re a shorter guy and a taller guy ‘looks down’ on you, you can still look dominant if you raise your chin up. See this example:

Next time you interact with someone at the counter, pay attention to the direction in which your head moves while you wait. If you’re not a dominant person, you’ll find that while your body is facing the counter, your head turns to the side to ‘scan’ the environment.

“I can’t face what’s in front of me. I’m looking for an escape.”

It’s one of the signs of nervousness. People who’re confident tend to look in the direction in which their bodies are oriented most of the time.

Facial expressions that communicate dominance include:

If you hold your head still in conversations, you show dominance. You show that you’re unimpressed by what others have to say. This is often accompanied by prolonged eye contact and a neutral facial expression to show a lack of interest.

When you do this gesture, you communicate:

“You better make sense or say something worthwhile if you want a reaction out of me.”

Relaxed shoulders communicate dominance because when people are nervous, they tend to raise their shoulders. It’s an unconscious attempt to protect the neck and make the body smaller.

Of course, we also do it when it’s cold to reduce the surface area of our body and lose less heat. So, pay attention to the context.

8. Not crossing the arms

Crossing the arms is a classic defensive body language gesture. Since dominant individuals don’t need to defend themselves, they don’t cross their arms. Also, they don’t hide the front of their body behind wine glasses and handbags. They have no need of erecting any barrier between themselves and others.

Dominant people have no problems spreading their arms out and moving them freely during conversations. Doing so makes them appear bigger and more in control. Nervous people tend to stick their arms to their sides if they’re not crossing them. This makes them appear smaller.

11. Hands outside of pockets

Hiding the hands in your pockets shows you’re trying to hide yourself or a part of yourself. When people freely show their hands during conversations, they communicate openness, honesty, and confidence.

Keeping your palms down as you talk communicates:

“I have control over you. You’re under my hand.”

This gesture is usually done when we ask someone to ‘slow down’ or ‘calm down’. Since these are commands used to control people, they give us a slight power boost.

During greetings, those who use the palm down handshake are trying to assert dominance.

Pointing your index finger at people is very annoying for them, no matter the context. It’s almost as if they see your finger as a club with which you’re about to pummel them. It’s a highly dominant gesture that’s often used to blame, judge or accuse others.

The hand is also used for instructing- a way to control others. If you see a group of people and this one guy moves people around with his hand signals, you immediately know he’s the most dominant person in the group.

I used to think that being a traffic policeman is the most boring job in the world. I wondered why people even do it. Now, I realize that directing traffic with your hands must feel immensely powerful.

It’s the same reason why driving a vehicle makes you feel powerful. You’re able to control this large machine with only your hands and feet.

You’ve probably heard a gazillion times that a good posture is important. Having an erect posture with a straight back makes you appear taller and signals openness.

Taller people tend to be larger people and showing openness signals you’re unafraid. When we’re happy, we naturally straighten our backs and spread our arms to make ourselves bigger (think celebrating athletes). When we’re down, we tend to slouch.

Having a straight back, therefore, communicates you feel good about yourself. Others pick up on it and feel good too since emotions tend to be contagious.

Crossing the legs can sometimes be an unconscious attempt to hide the delicate crotch area. When this gesture is assumed during interactions, it gives people the same feeling of you not being open enough as the ‘crossing arms’ gesture does.

Sitting with open legs and walking with wide steps are powerful signals of dominance.

A slow, low-pitched voice is effective in one-to-one interactions. But if you’re in a group, it can make you come across as shy. In a group, you want to be heard so you need a loud enough voice. However, being too loud would communicate you’re trying too hard.

Again, the key idea is taking your time to do things. When someone’s rushing you, they’re controlling you. Losing control equals losing power.

When you lead and others follow, you show you have more power than them because you’re controlling and guiding them. To lead, people first need to see you as their leader. Leading when others don’t see you as a leader is annoying.

Say you invite a couple of friends to your house. Friend A has visited you before but Friend B is coming to your place for the first time.

As soon as B enters your house, A shows him around, tells him where the different rooms are, where to sit, and so on.

In other words, he’s ‘playing host’ even though he’s a visitor himself. This can annoy you because you’re the real host. He’s acting as if he owns the property, not you.

In the previous example, your friend annoyed you by making a territorial claim over your property. Dominant individuals aren’t afraid to make such territorial claims, even though they can piss people off.

21. Moving to a higher position

Humans associate height with status and power. So, to appear powerful, people sometimes move to a higher position.

When I was working in an office, our boss used to arrange these lunches for us. We’d sit and eat while he was standing. I used to think:

“Wow, he’s so selfless. He wants us to eat before he does.”

It may have been true but from a power dynamics perspective, standing while everyone else is sitting gives you that ‘I’m above you mortals’ feeling of superiority.

Historically, people who were considered high status wore large hats and stood on raised platforms for the same reason (think priests and kings).

When you touch others or their possessions, you claim ownership of them. This is another dominant move that people find annoying. It also invades their personal space.

Touching can also be used to direct and instruct people. In almost all situations, the person who touches has more power than the one who is touched. Dominant people are always finding an excuse to invade your personal space and touch you.

Take a look at this example where Trump is essentially communicating: “Let me take care of you, my little boy.”

Imagine how awkward it would be if, after a meeting, an employee pats the shoulder of his boss saying:

This will likely infuriate the boss because the employee is stealing their right to exert control.

As you’ve seen, some dominant body language displays make others feel good, while others don’t. Some are appropriate and some aren’t, depending on the situation.

When you spot someone trying to dominate you and you don’t accept their dominance, try not to submit. When you submit to a dominant person, you confirm their dominance. If you don’t respond with submissive or complying behaviors, you leave them in their dust.

Try not to be mad at people for displaying dominance signals. They’re probably doing it unconsciously and won’t understand if you call them out. Instead, you want to counter them under the radar.

In most situations, giving off dominance signals is desirable to come across as high-status. In some cases, even showing submissiveness can be ideal. Don’t get trapped into a particular way of being. Use body language signals strategically. Think about the outcomes you want and behave accordingly.