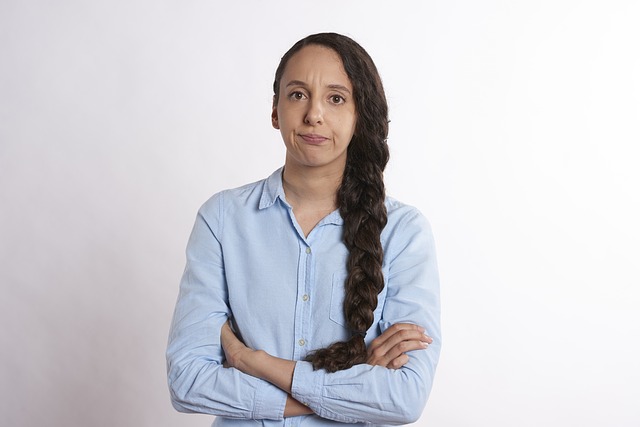 ‘Crossed arms’ is perhaps the most common body language gesture that we come across in our day-to-day lives. Crossing arms across the chest is a classic gesture of defensiveness.

This defensiveness usually manifests as discomfort, uneasiness, shyness, or insecurity.

When a person feels threatened by a situation, they cross their arms over their chest, creating a barrier that helps them protect their vital organs- the lungs and the heart.

When a person finds himself in an undesirable situation, you’ll find him folding his arms and if the undesirability is intense, the arms-crossing may be accompanied by legs-crossing.

A person who’s waiting for someone and is feeling awkward at the same time might do this gesture.

In a group, the person who doesn’t feel confident is usually the one who has his arms crossed.

When someone suddenly hears a piece of bad news, they instantly cross their arms as if to symbolically ‘protect themselves’ from the bad news.

You’ll also observe this gesture when a person feels offended. Defense is a natural reaction to an offense. When someone is humiliated or criticized, they’re likely to cross their arms to assume the defensive mode.

If you see two people talking and one of them suddenly crosses their arms, you can safely assume that the other said or did something that the first person didn’t like.

If the arms are crossed and the fists are clenched then this indicates an attitude of hostility in addition to defensiveness.

We clench our fists when we’re angry and are about to punch someone, literally or symbolically. This is a very negative body language position that a person can acquire. You should try to figure out what’s bothering the person before continuing your interaction with them.

If the person is feeling extremely defensive and insecure, the arms-crossed gesture is accompanied by hands tightly gripping the biceps.

It’s an unconscious attempt at a ‘self-hug’ so that the person can relieve himself of his insecurity. The person is doing the best he can to avoid exposing his vulnerable front portion of the body.

You may have observed this gesture in the dentist’s waiting room or in a person whose friend or kin is undergoing a major operation while they’re waiting outside. Those who’re afraid of air travel may assume this gesture as they wait for the take-off.

Sometimes a person, while feeling defensive, tries to give the impression that ‘everything’s cool’. Along with the ‘crossing the arms’ gesture, they raise both their thumbs, pointing upward. As the person talks, they may gesture with their thumbs to emphasize certain points of the conversation.

The typical defensive position also signifies a submissive attitude. The person crosses his arms, the body becomes stiff and symmetrical i.e. the right side is a mirror image of the left side. They don’t tilt their body in any way.

However, when the arms-crossed position is accompanied by a slight tilt or twist of the body such that the right side of the body is not a mirror image of the left side, it shows that the person is feeling dominant. They may also lean slightly backward as they take this position.

When high-status people pose for a photograph, they may assume this gesture. Being clicked makes them feel a bit vulnerable but they hide it by slightly twisting their body and putting up a smile.

Picture a standing policeman posing for a photo with arms crossed and shoulders parallel to you- the observer. It looks a bit odd because there’s just defensiveness. Now picture him with arms crossed but at a slight angle from you. Now, dominance enters the equation.

During interrogations when the suspect, though feeling insecure, wants to piss off the interrogator, he might take up this gesture.

Keep the context in mind

Some people claim that they cross their arms habitually or just because it feels comfortable. It could be true so you have to figure out what’s really going on by looking at the context of the situation.

If a person is alone in a room, watching a funny movie, then it surely doesn’t indicate defensiveness and the person may just be trying to make himself more comfortable.

But if the person crosses his arms while interacting with particular people but not the others, it’s a clear sign that something about those very people is bothering him.

We don’t cross our arms when we’re feeling good, having fun, are interested or excited. If we’re ‘closing up’ ourselves then there has to be some reason behind it.

Avoid this gesture as much as you can because it decreases your credibility. Tell me, will you believe a speaker’s words if he talks with his arms crossed? Absolutely not! You’ll probably think that they are insecure or hiding something or misleading or deceiving you.

Also, you may end up paying little attention to what he has to say because your mind is preoccupied with the negative feelings that you developed towards him due to his defensive gesture.

We can see many body language gestures can be seen as full or partial. Crossing the arms partially is a milder version of the common arms cross gesture.

When a child faces a threatening situation, she hides behind a barrier- a chair, table, parent, under the stairs, behind a parent, anything that can block it from the source of the threat.

At about age 6, hiding-behind-objects becomes inappropriate and so the child learns to cross his arms tightly across its chest to create a barrier between itself and the threat.

Now, as we grow older and become more conscious of ourselves, we adopt more sophisticated ways of creating barriers when we feel threatened. Everyone knows, at least intuitively, that crossing the arms is a defensive gesture.

So we adopt subtle gestures to ensure that our defensive and threatened position isn’t so obvious to the others.

These kinds of gestures comprise what are known as the partial arm-cross gestures.

A partial arm-cross gesture involves swinging one hand across the front portion of the body and touching, holding, scratching or playing with something on the other arm or near it.

A partial arm cross gesture commonly observed is where one arm swings across the body and the hand of the barrier-creating arm holds the other arm. This gesture is mostly done by women.

The higher the hand grips the arm, the more defensive a person is feeling. It looks as if the person is hugging himself.

When we were kids, our parents used to hug us when we were sad or tense. As adults, we attempt to recreate those comfort feelings when we find ourselves in stressful situations.

Any gesture that involves moving one arm across the body can be used for the purpose of creating a barrier. For example, men often adjust their cuff-links, play with their watch, pull the cuff button, or check their phones to create these arm barriers.

Where to observe these partial arm barriers

We can see many body language gestures in situations where a person comes in the view of a group of onlookers. The self-consciousness that results from the pressure of so many people watching makes a person want to hide themselves by creating a barrier.

You’ll notice this gesture when a person enters a room full of people he doesn’t know or when he has to walk past a group of onlookers. Celebrities often adopt subtle partial arm barriers when they come in full public view.

They try their best to smile and display a cool attitude, but what they do with their arms and hands reveals their true feelings.

Traveling via the local transport, you’ll often see a passenger do this gesture as soon as he boards the bus or the train. Women do it quite conspicuously by swinging one arm across and holding their handbag.

If you notice this gesture in a group, then the person doing it may either be a stranger to the group or he might be feeling insecure. Now don’t conclude that the person lacks confidence or is shy just because he does this gesture.

He might be feeling insecure because of something that he just heard.

If you are negotiating with a person, an effective way to check how the negotiation is going on is to offer some kind of refreshment to the other person. Then watch where he places the cup of tea or coffee or whatever you gave him on the table

If the person has established a good rapport with you and is ‘open’ to whatever you’re saying, he might place the cup on his right side on the table.

On the contrary, if the person is not convinced and has a closed attitude towards you, then he might place the cup on his left side so he can create a barrier again and again whenever he goes for a sip.

Or it may just be that there wasn’t enough space on his right. Non-verbal skills don’t come easy, you see. You have to eliminate every other possibility before you can come to a solid conclusion.