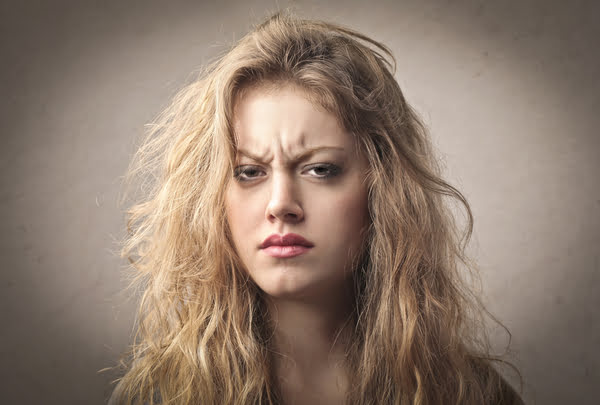 To furrow one’s eyebrows means to wrinkle them. Someone with furrowed eyebrows has visible lines on their forehead.

Eyebrow movement in humans is a robust social signaling system. A lot of social information is exchanged by the furrowing of brows.

So, the next time you see those lines on someone’s forehead, pay attention to what it could mean.

Note that in some people, natural creases may appear on their forehead due to genetics or skin problems. Lines on the forehead naturally appear as people age, and their skin loses elasticity.

As always, look at the context when interpreting body language and facial expressions.

To understand the meaning behind those lines on someone’s forehead that appear as a reaction to something, we must understand why people move their eyebrows in the first place.

Let’s dive into specific meanings of furrowed brows in body language. The accompanying gestures and facial expressions will help you distinguish these meanings better.

Anger ranges from mild to severe. Annoyance and irritation are examples of mild anger. Rage is an example of intense anger.

We get angry when we’re displeased with something in our environment. We want to block the source of anger. So, we lower our brows and narrow our eyes.

In extreme anger, we may shut our eyes altogether or look away.

So, lowering the brows and narrowing the eyes is partial eye-shutting.

Your spouse gets angry that you forgot to get an item from the grocery store. She furrows her brows and takes up the following accompanying gestures and expressions:

When we feel contempt for someone, we think low of them. We think they’re despicable human beings. Contempt is usually subtle and not as intense as anger.

The underlying principle remains: You want to block out the person you’re contemptuous of.

You make a mistake at work, and your boss criticizes you. You notice their furrowed brows, narrowed eyes, and the following expressions of contempt:

Disgust can be thought of as an extreme version of contempt. When we’re disgusted by someone, we’re not annoyed or irritated. We’re repulsed. We have a visceral reaction.

You see someone throwing a wrapper on the street. As an environmentally conscious human being, you’re disgusted by them. You lower your eyebrows, narrow your eyes and make the following disgust expressions:

Fear can manifest as a concern, worry, or anxiety. Avoidance of feared objects is a natural reaction to fear. In terms of facial expressions, that avoidance is achieved by lowering the brows and narrowing the eyes.

You make a crude joke at a party and are worried that others did not take it well. As soon as you finish the joke, you raise your brows to take in the information, “Did they find it funny?”. In addition, you express your fear by:

When we disapprove of, or disagree with, someone or something, we want to block that thing out. So, lines on the forehead can indicate disapproval of what’s happening.

While talking to a friend, you share an unpopular opinion. You notice their furrowed brows and:

Sometimes, lines on the forehead may appear when a person raises only one brow, keeping the other one neutral or lowered. This facial expression was popularized by Dwayne Johnson (The Rock), the famous wrestler and actor.

I’ve seen some speakers use this expression when they’re debunking an idea. They’re suspicious of the idea and want the listener to be wary too.

The facial expression of suspicion may be accompanied by:

At any rate, the blocking is there- figurative or actual.

Your girlfriend misses you when you’re video-calling her. You can see the facial expression of sadness on her face. Her eyebrows are furrowed and:

Sadness, anger, disgust, and fear are examples of emotional stress.

Furrowed eyebrows are seen when we’re confused or concentrating hard on something. These are mentally stressful states having nothing to do with emotion.

In addition, furrowed brows are also caused by physical stressors like lifting a heavy weight or feeling cold.

When we’re surprised, we lift our eyebrows to widen our eyes and ‘take in’ novel information.

Pay attention to facial expressions accompanying the expression of surprise:

People tend to avoid making eye contact when they think they’re above someone. Attention is a currency, and people tend to pay more attention to those at their level or above them.

Ignoring someone and avoiding eye contact can thus be a way of communicating: