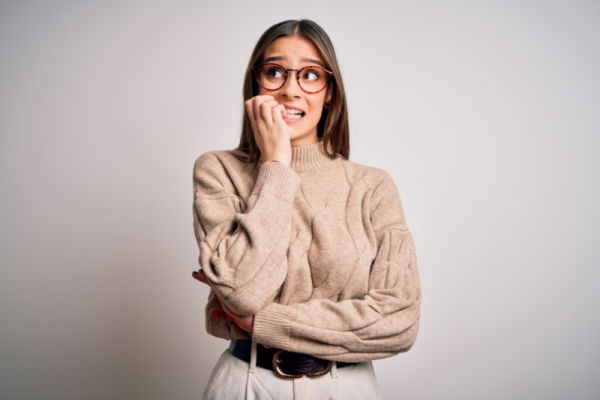 When you display signs of nervousness and discomfort, you make others uncomfortable as well. People have this tendency to catch the emotional states of others.

That’s why it’s important to minimize displaying nervous body language as much as possible. They create bad first impressions and lower your social status.

There are many signs of nervousness in body language. It’s difficult to classify them meaningfully. The best way to go about it is to think about what type of responses a person may use to counter a social threat.

These are all ‘weak’ ways of dealing with social threats, but they help the nervous person achieve some respite from the threat. These are very broad categories and some signs may fall into more than one category.

The more of these signs you see, the more likely it is that a person is nervous. Try not to rely on a single gesture and note the context.

These behaviors avoid head-on engagement with a social threat. For example, when talking to their superiors, some people feel nervous and show avoidance behaviors such as:

This is a big one and something many people struggle with. When we avoid eye contact with people, we communicate, “I’m not confident enough to face you.”

Nervous people, when they enter a room full of strangers, will do their best to avoid eye contact. They’ll look away to avoid looking at people in the face. While their face and body might be pointed at others, their eyes will be pointed away.

This creates an incongruence between their body orientation and the direction of their gaze.

They’ll shift their eyes rapidly to avoid holding eye contact with people. If they mistakenly do make eye contact, they’ll be the first to quickly look away.

Turning the face and body away

If you’re turning your face and your body away, you’re expending more effort than simply turning your eyes away. You must have something important to look at.

Of course, a nervous person rarely has anything important to look at. They’re just doing it to avoid engaging with people. They may turn their body toward the other person, but they turn their head and stretch their neck to look at nothing.

It’s a momentary escape from a mildly threatening social situation.

Ever seen a speaker pace around the room as they speak? Annoying, isn’t it? It’s a way to avoid too much attention on oneself.

Rushing can be a sign of nervousness and anxiety. Any behavior that is rushed unnecessarily in a social situation communicates the person wants to get out of the situation as quickly as possible.

Imagine a nervous guy eating out on a date with a beautiful woman. He drops the menu while reading it and then quickly picks it back up. When food is served, he quickly picks the fork and starts eating fast.

No, he’s not in a hurry. His nervousness is forcing him to get out of the situation as fast as possible, resulting in hurried movements.

Another way to avoid engaging with social threats is to maintain your distance. A person who’s not comfortable at a party, for example, will maintain distance from the others.

People who maintain distance from others are afraid of invading their personal space. Of course, it’s polite not to invade someone’s space, but you’re expected to be physically close to people in some situations.

If you stand farther than you should, you come across as unconfident and nervous. You’re avoiding people’s gaze and seem unwilling to engage with them.

When a person is talking to you, they’re not avoiding you. They’re engaging with you. If they feel nervous, how does it leak out in their body language?

People subconsciously try to make themselves smaller to hide from others. A common way this is done is by occupying less space.

This can be done by minimizing the use of expansive gestures. Nervous people don’t want to be seen, so they avoid occupying too much space with their bodies and gestures.

Another way people can make themselves look smaller is by raising their shoulders and moving them forward. Having a bad posture (looking down) is not only a way to avoid engaging with others but also a way to make yourself smaller.

Showing your palms when you talk signals honesty and openness. Hiding your palms signals the opposite. Nervous people don’t want to ‘open’ up to others. So they hide their hands by resting them on the sides or putting them in their pockets versus making hand gestures.

Sometimes people also engage in partial arm-crossing where they only have one arm across their torso. Other times, they’ll find an object to cover the front, vulnerable part of their body.

Freezing is another common defensive gesture. It avoids movements that would make one easily noticeable. A person may be totally relaxed and comfortable when they’re with you but become stiff in social situations.

Freely moving your body as required signals confidence. People can sense when you’ve frozen with fear or nervousness. They’ll get that bad vibe from you.

As you’ve seen, looking down is the hallmark of nervous behavior. It signals avoidance, defensiveness, and submissiveness. Women can get away with looking down because it makes them look attractive, but not men.

Agreeing with someone too much can also signal submissiveness. It’s how low-status people seek the approval of high-status people.

Imagine two people talking and one nodding much more than the other in a “Yes, Sir… Yes, Sir” manner. Who looks submissive?

A high-pitched voice is associated with submissiveness.

Imagine a political leader delivering a speech in a high-pitched voice. People may find it hard to take him seriously.

The beginning of this clip is a good example of the effect of upward inflection:

Another nervousness signal in the voice is when a person trails off at the end of their sentence. They say something, notice people aren’t paying attention, and then they trail off. Their volume drops and they may not even finish their sentence.

A shift to a faster speed of talking may show that the person wants to get out of the conversation out of nervousness.

The louder you speak, the more conviction you have in your words. In group settings especially, the quieter you are, the more nervous you’re likely to be.

Being nervous isn’t a pleasant state of mind to be in. It feels bad and painful. So, the nervous person tries to soothe the pain with self-soothing or self-pacifying behaviors such as:

When people are nervous and anxious, they feel a sense of loss of control. To restore a sense of control, they apply pressure to their body parts or objects with their hands.

This gesture, triggered by anxiety and discomfort, achieves the same purpose as knuckle-cracking. When nervous people wring their hands, they also bring them in front of their body. So, this is also a form of partial arm-crossing.

Control can be restored not only with hands but also with the mouth. Nail-biting and putting objects such as a pen in the mouth make a person feel in control.

Fidgeting is repetitive and unnecessary movements such as hands or feet tapping. These movements are triggered by anxiety and help a person gain some control. These gestures communicate nervousness and impatience. The person wants to get out of the situation.