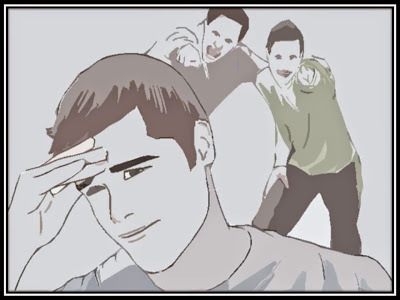 In this article, we’ll explore the nature of hatred, causes of hatred, and how a hater’s mind works.

Hatred is an emotion we experience when we feel someone or something is a threat to our happiness, success, and well-being.

The feelings of hatred are there to motivate us to move away or avoid the people or things we believe have the potential of causing us pain. We’re all naturally motivated towards pleasure and away from pain.

So when a person says “I hate X” (X can be anything- a person, place or even an abstract idea), it means X has the potential to cause pain to them. Hatred motivates this person to avoid X, a potential source of pain.

For example, when a student says “I hate maths”, it means math is a potential or actual source of pain for this student. Maybe he isn’t good at it or that his math teacher is boring- we’re not concerned with why he hates math.

What we’re concerned with, and know for sure, is that math is painful to this student. His mind, as a defence against this pain, generates the feelings of hatred in him so that he’s motivated to avoid maths.

Maths causes him such psychological discomfort that his mind is forced to launch the emotion of hatred as a pain-avoidance mechanism. This motivates him to stay away from maths.

Had he been good at maths or perhaps found his math teacher interesting, his mind would’ve found it unnecessary to generate hatred. He probably would’ve loved it instead. Love is the opposite of hate.

This extends to people as well. When you say that you hate someone, it simply means you see that person as a threat.

A student who always wants to top in his class may hate his bright classmates and thus feel uncomfortable around them. On the other hand, he might feel okay when he deals with average students because they pose no threat to his goals.

What does hatred do to a person?

A hater hates because their psychological stability has been disturbed and, by hating, they manage to restore it. Jealousy and hatred are closely related.

When a person who hates you sees you doing something that they wanted to do but couldn’t or can’t, they may try to stop you or slow you down. This is because watching you succeed makes them feel inferior, insecure and unworthy.

They may, therefore, criticize you, gossip about you, ridicule you, laugh at you, or demotivate you- anything to hinder your progress.

They won’t congratulate you or acknowledge the great things you might have done, even if they’re impressed by them. They already feel inferior and can’t bear to make themselves feel worse by praising you.

Haters can’t see you happy and they may sometimes ask you detailed questions about your life just to make sure you’re miserable or at least doing worse than them.

Hating others who don’t belong to your group

The human mind is biased to favour in-groups and hate or harm out-groups. Again, this boils down to threat-perception. Humans see others who don’t belong to their social group as a threat. This is because human groups, for thousands of years, have competed with other human groups for land and resources.

This the basis of hate-crimes motivated by things such as nationalism, racism, and xenophobia.

When you see someone or something as a threat, you become powerless before them, at least in your own mind. So one important function of hatred is to restore that sense of power in you. By hating someone and making fun of them, you feel powerful and superior.

I call this behaviour ‘scoring points’ because when you hate on someone, it’s like you’ve scored a point over them. Then they feel powerless over you and try to score a point by hating on you. And the cycle continues. This behaviour is common on social media.

On such bad days, you might find yourself rushing to social media and offending the people or group you hate. Psychological balance restored.

Hatred feeds on itself. When you’re out trying to score points, you’re letting other people harbour hatred for you. Soon, they’ll score points over you. This way, hatred can create an endless cycle which may not end well.

Hate others at your own risk. Know that when you hate someone, you feed hatred for yourself. The more people hate you, the more likely it is that they’ll harm you.

You need to deal with your haters strategically. You can’t show your hate to someone who has the power to destroy you.

The supreme art of war is to subdue the enemy without fighting.

Self-hatred: Why it can be both good and bad

In self-hatred, the self becomes the object of hate. Continuing logically from what we’ve discussed so far, self-hatred happens when one’s own self comes in the way of one’s happiness and well-being.

Self-hatred is like your inner police. If you fail to reach your goals and believe you’re responsible, self-hatred is logical. Self-hatred motivates you to take responsibility for your happiness and well-being.

Despite what many flowery words using experts will tell you, you don’t have an abundance of self-love and self-compassion that you can shower upon yourself whenever you want. Self-love doesn’t come that easy.

Self-hatred tells you: You’re responsible for the mess you’ve become.

If you know it’s true, you can’t ‘self-love’ your way out of these feelings. You have to earn self-love by not being a mess.

Of course, there are times when self-hatred is unjustified. You may not be responsible for the position you’re in, and yet your mind blames you. Then you have to fix your false beliefs and see reality accurately. Therapies like CBT can be effective in this regard.

Not everyone becomes a hater

All of us find ourselves in a weaker position compared to others at some point in our lives, but all of us don’t become haters. Why is that?

A person only hates someone when there’s nothing else that they can do. All their options have been exhausted.

Suppose a child wanted a toy, but her parents refused to buy her one. The child will then do her best to persuade the parents. If that doesn’t work, she may start crying. If crying fails too, the child may resort to the last option i.e. hatred and might say things like:

I have the worst parents in the world.
I hate you both.

Since no one likes to be hated, the child’s mind used one last weapon to motivate the parents to buy the toy by inducing guilt in them.

Sometimes people find themselves hating someone they don’t even know. One fact you must know about the subconscious mind is that it believes that similar objects or people are the same.

If, in school, you hated a rude teacher who had brown hair and wore glasses, you might hate a similar-looking person (with brown hair and glasses) without understanding why.

This happens because you subconsciously think the two persons are the same. Therefore, hating one person automatically makes you hate another.

How do you get rid of hatred?

It’s not possible. You can’t wish away a psychological mechanism that has served its evolutionary purpose well for thousands of years.

What you can do, however, is eliminate or minimize the harm that your hatred may inflict on you and others. I know it’s difficult not to hate someone who may have harmed you. But they deserve a chance.

Try looking at things from their perspective. Confront them and tell them what they did bothered you and caused hatred in you. If they really value the relationship you two have, they’ll work with you to resolve it.

If not, instead of wasting time hating on them, just remove them from your life. It’s better than harming them and your mind will thank you (hatred is a burden).

It’s normal to feel hatred towards people or things that have the potential of causing you real harm or that have harmed you. But if your feelings of hatred are driven by jealousy or insecurity, you may not be able to overcome your hatred unless you deal with those issues first.