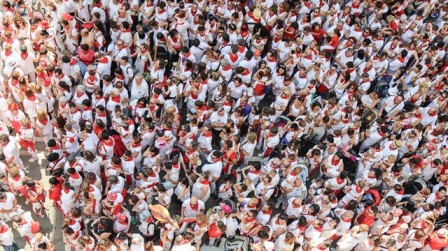 Is it true that we are all the same? Or are we all different? People seem to argue on this topic endlessly. Consider the following scenarios:

He says he doesn’t want attention. But did you look at his face when he was called up to speak? He clearly loved the attention. We all love attention. We’re all the same.

She doesn’t like it when someone interferes in her personal life. Others may like it when you ask them about their relationships, but she gets very defensive. We’re all different you see.

Many well-meaning people will sagely tell you we are all unique, that we have our own peculiarities and idiosyncrasies. This makes you believe that no two people are alike just like no two snowflakes are alike.

Then there are others who insist that alike or not, we’re all snowflakes after all. They tell you we are all the same.

The result is confusion: Are we all the same or are we not?

I’m sure this confusion must’ve gripped you at some point in your life. You may have fluctuated between the two schools of thought, depending on your recent observations.

The truth, as with so many other things, lies somewhere in between and not on the extremities.

We are all the same, and different too

Both schools of thought are correct. We are all the same but different from each other as well.

Humans are born with some hard-wired behaviours that are a part of our genetic heritage. These are the behaviours we demonstrate just because we are humans.

Another level of innate behaviours has to do with our sex and sex hormones. Men have certain ways of behaving that differ from how women behave and vice versa.

These are the default settings we’re all born with. So nobody is born a clean slate.

For example, we all want to feel important, special, and loved. We all like food and sex. These are basic human needs no one can claim they’re free from unless they’ve deluded themselves or suffered from severe neurological disorders.

Additionally, we all have a subconscious mind that operates the same way in all of us. Though it stores different beliefs in different individuals, the interaction with those beliefs happens in the same way. This results in similar emotions and behaviours in people.

There is no emotion that only a select few people feel because our fundamental neurobiology is the same.

This alone has largely made the study of mind possible. If everyone’s subconscious worked differently, we wouldn’t have known whatever little we know about it today.

Then there’s another category of behaviours known as learned behaviours. As the name suggests, we’re not born with these behaviours but learn them from our environment. These are what make each one of us unique.

Even identical twins differ in their learned behaviours because of different life experiences. Still, the fundamental aspects of their personality (such as temperament) are more or less the same as these are controlled by genetics.

The boy who says he doesn’t want attention may have never gained attention. So he invents a new lie: ‘I don’t want attention’ to protect his ego. But when he does receive it, he behaves like most people.

The girl who doesn’t want others to interfere in her personal matters may be the one whose environment made her believe that others’ interference can harm her relationship. Maybe she saw it happen to someone or maybe it happened in her previous relationship.

When we get a new phone, it has default factory settings. People customize the settings according to their own needs and preferences.

The human mind is very much like the phone. We come with certain default settings and certain customizable settings. Think of apps as beliefs. They’re grounded in your basic settings but you can add or remove them.

You may even install an app (with a virus) that interferes with your phone’s basic settings.

Similarly, our environment can sometimes program us with beliefs that override our innate genetic programmings.

Take the example of people who don’t want to get married or have children.

Reproduction is fundamental to evolution and we are genetically programmed with a host of psychological mechanisms to ensure that we reproduce.

We’re attracted to potential partners, fall in love with them, and get attached to them. We have parenting instincts that motivate us to take care of our young ones.

Most people we come across see having and raising children as their ultimate goal in life.

But what about those who don’t want children? Nobody can deny they exist.

It’s unlikely their behaviour has something to do with their genetic programming. What’s happened in their case is that they’ve formed certain beliefs that have overridden their desire to reproduce.

Some may not want to have children because they believe the planet is already overpopulated.

Some may not want to get married because they’re too passionate about their work and don’t want to expend any time or effort in parenting.

Some may not want to have kids because they just don’t see it as an important goal to have in life.

Some may not want to get married because they’ve seen how dysfunctional their parents’ marriage was. They don’t want that to get repeated for themselves.

Our evolved behaviours, that make us all the same, result from the ever-present genetic nudges nudging us to reproduce. We don’t have a choice to stop these nudges.

However, the act of reproduction itself is a choice. If we acquire beliefs that convince us not having children is better than having them, we stop acting on our nudges. Evolution has made us smart enough that we can cheat ourselves out of its own programming.