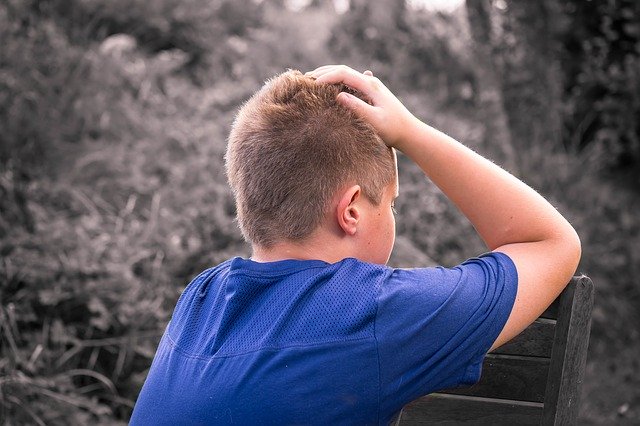 When we scratch our head using one or more fingers anywhere on the top, back or the side of our head, it signals the emotional state of confusion. Watch any student trying to solve a difficult problem and you’re likely to observe this gesture.

There isn’t a better place to observe this gesture than in an exam hall, where students often get confused when they receive the question paper.

As a teacher, when you’re trying to explain a concept to your students and they scratch their head, you should try explaining the concept in a different way.

Sometimes, instead of using the fingers, a student may use an object such as a pen, pencil or ruler to scratch their head. The message conveyed is the same in all the different cases- confusion.

Scratching or rubbing the forehead

Scratching or slapping or rubbing the forehead usually indicates forgetfulness. We often scratch or slap our foreheads when we’re trying hard to remember something.

However, this gesture is also done when someone is undergoing any kind of mental discomfort that results from engaging in any difficult mental activity such as thinking hard.

Let’s face it: Thinking is hard for most of us. It was Bertrand Russel who said, “Most people would sooner die than think. In fact, they do so.”

Any activity that requires mental effort can force a person to scratch their forehead and not just when they’re trying to recall something, which can be hard as well.

Note that thinking hard over a problem does not necessarily imply a state of confusion. Also, keep in mind the context of the situation. Sometimes we scratch our head only because we’re feeling itchy.

Mental discomfort can also result when people irritate or annoy you. When you’ve had enough, you scratch your forehead or worse, physically attack the source of your annoyance and frustration.

I’m sure you’ve observed, at least in the movies, that when someone is totally pissed off during a conversation, they’ll scratch their forehead a little before punching or slapping the annoying person.

So if you’re talking to someone and they frequently scratch their forehead without saying anything, there’s a good chance you’re bothering them.

Clasping hands behind the head

This gesture is almost always done in a seated position and has two variations. One with elbows spread out and the other with elbows pointing forward at about 90 degrees to the body’s plane.

When a person clasps their hand behind their head with elbows spread out, they’re feeling confident, dominant and superior. This gesture communicates the message: “I’m confident. I know it all. I have all the answers. I’m in charge here. I’m the boss.”

When you compliment someone for their great work, they might instantly assume this body language position. You can be sure that your compliment made them feel good about themselves.

Though this gesture signals confidence, it’s not recommended for job interviews because it can threaten the superior position of the interviewer. Threatening the interviewer is the last thing any job aspirant would like to do.

“This is unbelievably shocking”

When we clasp our hands behind our head with elbows pointing forward, it signals disbelief and unpleasant surprise. A surprise so great that we’re inclined to disbelief and denial.

It communicates the message: “This is unbelievable. It can’t be true. I’m shockingly disappointed.”

It’s often accompanied by lowering or moving away of the upper body and closure of the eyes because we’re unconsciously blocking the shock or surprise that is too much for us to handle. Sometimes the hands are clasped on top of the head instead at the back of the head.

Let’s look at this gesture from an evolutionary point of view. Imagine you are a hunter fixing your gaze on the prey as you walk slowly in tall grass. You’re waiting for the right time to attack, the right time to throw your spear.

Suddenly, a leopard from a nearby tree jumps at you. Imagine it and try to visualize what your instant reaction would be. Yes, you’d lean away from the leopard and clasp your hands behind your head.

This gesture protects the delicate back of your head and the elbows prevent any damage that may occur to the face from the front. Damage such as a leopard sinking its claws in your face.

Today, we humans are less likely to encounter such situations but in our ancestral times, it was fairly common. So this response is ingrained into our psyche and we use it whenever we face a situation that emotionally shocks us even if it presents no real physical danger.

In modern times, this gesture is done when a person hears shocking news like the death of a loved one. When a person who is injured in an accident is rushed into a hospital emergency room, you might see their relative or friend doing this gesture in the waiting area.

When a soccer player misses a goal, he does this gesture to express his shock and disbelief. “This is impossible. How could I miss? I was so close.”

Watch this compilation video of missed goals and you’ll notice this gesture several times, including a dramatic one by coach.

What’s interesting is that you might even see fans do this gesture if their supported team misses a crucial opportunity or suffers a major blow. It doesn’t matter that they’re in the stands or watching the match on TV in their living rooms.

When you’re watching thriller movies, TV shows or documentaries, and you come across a scene that shocks you, you might find yourself doing this gesture.