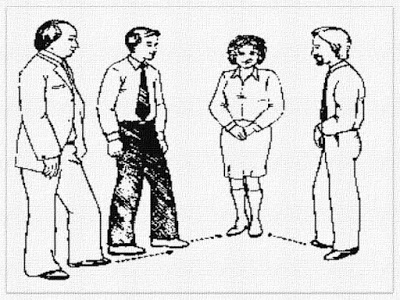 Can we deduce what’s on a person’s mind merely by reading the body language of their feet? That is the question this article attempts to answer.

When we communicate with others, we focus our attention mainly on their words and facial expressions. We pay little, if any, attention to gestures of the body and when it comes to feet, we almost never look at them.

Yet, as I mentioned in an earlier post on the body language of feet movements, what a person’s foot does can be the most accurate clue to their attitude.

The more distant a body part is from the brain, the less aware we are of its movements and hence the less we are able to manipulate it.

This means that while we can easily manipulate our facial expressions to hide our emotions or convey emotions we don’t feel, it’s hard to do so with feet.

Thus, our feet often give away our true feelings without us being aware of it. As a result, a body language expert won’t find it difficult to understand what’s on your mind merely by looking at your feet.

For instance, if you see a person talking to someone but their foot is pointing towards you, it means they are interested in you and want to approach you.

The person who points their foot towards you is thinking of approaching you in the back of their mind, even if they seem to be engaged with their own group.

You can confirm this by the occasional, stealthy look they give you. The person will try to keep you in their line of sight as long as they can and as often as they can.

It’s interesting to note that even before the person orients their body in the direction they want to go, they orient their foot. That is to say, foot pointing precedes body orientation.

Body orientation, prolonged gaze, and foot pointing, taken together, are sure signs that a person is interested in you. They’re literally asking to be approached.

Watch two people who’re totally interested in each other in a conversation and you may notice that each points their one foot (the lead foot) forward towards the other person.

If only one of them finds the other interesting, you’ll only see one foot stepping forward. Of course, the interested person will be the one who assumes the foot forward position.

This gesture conveys interest and/or attraction because of two reasons.

First, the person is pointing their foot toward the other person and the direction in which we point our foot reveals where we want to go.

Even though the person is already engaging in a conversation with the other person they find interesting, they’d still like to go in their direction and engage with them more. Perhaps to make more bodily contact.

Second, this gesture is an attempt to reduce the personal space between the people involved. It almost looks like the person is ‘beginning to walk’ towards that which interests them.

Think of the body language people display when their stop is about to arrive while traveling by train. You’ll notice that their posture becomes erect and they place their hands on their knees.

In a group situation, if you watch in what direction a person is ‘beginning to walk’, you’ll easily figure out whom the person finds most interesting or attractive.

If we want to leave a meeting or a conversation, our foot will point toward the nearest exit.

If you notice this in a person you’re talking to, it can mean one of many things. It might be that they’re not interested in you or in what you have to say. Or they’re probably late for an appointment or that they might want to go to the washroom. So context matters.

In a group conversation, the person who first leaves will be the one who had his foot pointed in a direction away from the group. They’ll leave exactly in the direction where their foot was pointing, as if pulled by an imaginary rope along a straight line.

Some women, when they begin to think of leaving the room, point their foot towards the door and start adjusting the back of their clothing and hair to make a good rear-view impression as they leave.

When a person lifts their toes off the ground, pointing them upward, it means the person is in a good mood or is thinking or hearing something positive.

For instance, if a teacher announces a camping trip to the class, the especially excited students will point their toes upward.

If you notice a person pointing his toes upward while talking on the phone, it’s likely that they’re hearing something good or are simply enjoying their conversation.

You may be able to confirm this by their frequent smile during the conversation.

When people talk to those they find attractive, they may point their feet upward because they’re positively evaluating their current situation.