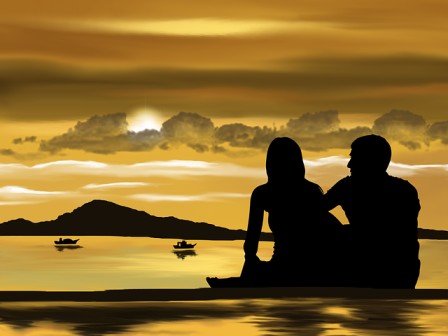 Body language signs of attraction are signs that people display, often unconsciously, when they’re in the presence of someone they’re attracted to.

Wouldn’t it be nice to know whether someone is interested in you before they even talk to you?

Yes, it’s possible thanks to body language. With the power of body language, you can tell if someone is attracted to you or not within the first few encounters.

Undoubtedly, it’s much more beneficial to approach a person who has unconsciously shown interest in you than to approach someone you’re uncertain about. You’re less likely to get rejected, and your confidence level soars.

Here are the 7 telltale body language signals that show interest and attraction:

1) Face is the index of the mind

A person who’s interested in you will make more eye contact with you. They’ll try to keep you in their line of sight as much as possible. Upon seeing you, their eyes will widen and sparkle.

Their pupils will dilate. They’ll also raise their eyebrows more often when they talk to you because they’re pleasantly surprised.

They’ll smile more in your presence and often unnecessarily. The smile will be a real one i.e. teeth will be slightly exposed and wrinkles will form near the corners of eyes.

2) The tilting and tossing head

A person who’s interested in you may tilt their head slightly when they’re talking to you. The head tilt is a classic sign of interest, if not necessarily attraction. It’s mostly used by women.

It indicates interest in general and not necessarily sexual interest, but when used frequently with other gestures, it becomes a good indicator of attraction.

Another common head gesture used by women is the head toss i.e. quickly shaking the head to the side and bringing it back to the original position, flicking the hair in the process.

These gestures expose the vulnerable neck and send the unconscious message, “I like you and trust you.”

3) Preening gestures as signs of attraction

When we’re in the company of people that interest us, we do our best to look good. If a person always does preening gestures when you enter the scene, it’s a good sign that they’re interested in you.

What kind of preening gestures am I talking about here?

It could be anything ranging from adjusting the hair or clothing to applying a slight makeup. Anything that reassures the person that he/she is looking good in your presence.

You may notice that when you’re talking to them, they keep checking themselves out on their phone screen or front camera. If they often do this in your presence, it conveys more than a general need to look good.

Even if a person is standing far away from you in another group, their body language can reveal their interest in you.

We orient our bodies to face people or things we’re interested in or want to engage with.

If a person is standing far away from you but is interested in approaching you, they’re likely to orient their body towards you. Their shoulders will be parallel to yours.

5) The feet have much to say

Sometimes, turning their body toward you in an obvious way can seem too awkward and desperate, especially if they’re positioned close to you.

In such cases, although the person may avoid turning their body towards you, their feet may still give them away. If their feet are pointing towards you, it’s a good sign they’re interested in you.

Sometimes, you may find them pointing one foot towards you while the rest of their body is turned toward their own group. This gesture may indicate that they want to leave their group and join you.

We all have an imaginary bubble around our bodies and we only allow those people in the bubble whom we’re comfortable with. The closer we feel to someone, the closer we allow them into our personal space.

If someone keeps you in their personal space more often than not, then it could mean they’re into you. When talking or interacting in other ways, you’ll find that person positioned closer to you than to anybody else.

7) Frequency of touching and attraction

A person who likes you will find excuses to touch you more often. Once intimacy is established by reducing personal space, the next thing that the person tries to do is to make physical contact.

A person who’s interested in you, if they sense you’re comfortable with them too, will definitely try to touch you more to increase intimacy. Often, the touching may seem unnecessary or overdone to you. But if you’re interested too, you’ll find yourself happily allowing it.

In judging whether a person is into you, it’s easy to jump to conclusions. Men are especially prone to making false judgments in figuring out whether a woman is interested in them.

You should observe the above signals multiple times before you can make any conclusion and test your conclusions before acting on them.

For example, if you think someone who’s interested in you is moving into your personal space, you can test whether they’re really interested or not by stepping back. If they want to maintain the same level of intimacy as before, they’ll unconsciously step forward.

One more thing: All the above signals indicate that a person is physically attracted to you. There’s often more to attraction than just physical attraction. If they talk to you and find out you’re an obnoxious person, body language is not to blame.