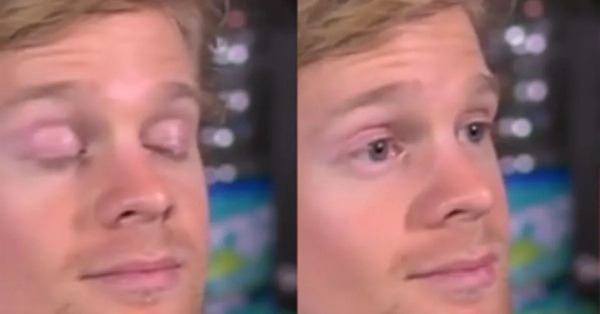 People blink excessively for a variety of reasons. The biological function of blinking is to lubricate the eyeballs to keep them moist. When our eyes become dry due to irritation, eyestrain, or contact lenses, we blink more.

In addition, excessive blinking is caused by some medical conditions and treatments such as:

Excessive blinking also has psychological and social reasons, which we’ll be discussing in this article.

We intuitively know that blinking is part of body language and communication. Studies have also shown that blinks can be communicative signals.1

Additionally, researchers have found that our brains are wired to observe blinks on other human faces, suggesting that they play an essential role in communication.2

Some people naturally blink more than others. You have to keep a person’s baseline level of blink rate in mind before you interpret their excessive blinking.

Knowing all this, how do you figure out what excessive blinking means in body language?

First, you must eliminate the medical, biological, and habitual reasons discussed above. Second, you have to pay attention to the social context in which excessive blinking occurs. Third, you have to look for body language cues that support your psychological interpretation.

We blink excessively when we’re aroused by stress. Stress is a very broad and vague term, I know. I’m talking here about the stress that results from mental discomfort with nothing emotional attached to it.

When a person goes through an inner struggle where they have to think a lot, they’re likely to blink excessively. You’re likely to notice this when someone is put under sudden social pressure.3

For example, when someone giving a public speech is asked a difficult question, it creates mental discomfort. They have to think hard to come up with a proper answer.

Similarly, people who have difficulty expressing themselves in conversations also experience mental discomfort and are likely to blink excessively.

Other body language cues that support this interpretation are irregular speech, looking away (for mental processing), and rubbing the forehead.

While anxiety can cause mental discomfort, it is more an emotional state than a purely mental state discussed in the previous section.

Anxiety is caused when we feel unprepared to deal with an impending situation.

To continue with the above example, a person giving a public speech may feel anxious and blink excessively while waiting for an audience member to ask a question.

Anxiety is almost always associated with waiting. Blinking excessively out of anxiety is the mind’s way of saying, “We need to run away. The future looks dangerous”.

Other body language cues that support this interpretation are nail-biting and foot or hand tapping.

One may also blink excessively when they’re nervous. Nervousness is anxiety in the present moment. The present is threatening, not the future.

Nervousness creates fear which creates psychological distress and overthinking. I’ve done a whole article about nervous body language that you can check out to identify all the supporting cues.

The main ones are:

While arousal by stress is usually negative, arousal can also be positive, as in excitement. When we’re excited by something, we’re likely to blink excessively. It’s the mind’s way of saying:

“This thing is so exciting. I want to blink my eyes excessively, keeping them moist and alert so I can get a good look at this exciting thing.”

In such cases, rapid blinking indicates interest or attraction.

Women often blink rapidly, fluttering their eyelashes when they’re being flirtatious. If you can recall, it was done very dramatically by flirtatious female cartoon characters. Take a look at this example:

Other signs to look for in women when they do this include tilting the head down and to the side, raising shoulders, and clenching fingers on the chest (done partially in the above clip).

Excessive blinking can be seen as a way to avoid eye contact, to block out something unpleasant when you can’t close your eyes or leave the room.

Imagine a celebrity being interviewed on TV. If the interviewer says something that the interviewee finds embarrassing, the latter may blink excessively communicating:

“I wish I could close my eyes and shut you out. Since this is TV, I can’t. So, I’ll do the next best thing- blink fast to communicate my displeasure.”

People usually do this when they see or hear something they don’t like. Other situations and emotions that trigger ‘blocking out’ excessive blinking include:

An interesting case of such blocking behavior is someone blinking excessively when they feel superior. They’re essentially communicating:

“You’re so beneath me. I don’t even want to look at you. We’re not equals.”

When the blink is long, it closes the eye for a longer duration indicating greater displeasure. When someone says or does something we don’t like, we’re likely to blink longer at them in condescension and disapproval.

When there’s a good rapport between two people interacting, one may unconsciously copy the other’s fast blink rate. In such cases, excessive blinking signals that the two people are interested in continuing the conversation.

The conversation is flowing well between the two.

The other person would become suspicious. They may think that the zero-blink rate person is disagreeing, displeased, bored, or uninterested in continuing the conversation.

There’s no longer a flow to the conversation and it may soon come to a screeching halt.

We all know what the blinking white guy meme means. It’s a good example of how supporting cues play a crucial role in interpreting body language.

If you were to break it down and look for supporting cues, you’d see that his raised eyebrows convey his surprise over what he’s observing/listening. The blinking indicates disbelief.

So, this meme is apt for use in situations where you want to convey your surprise and disbelief. If there were no eyebrow-raising in the meme, it’d be difficult to understand the blinking.