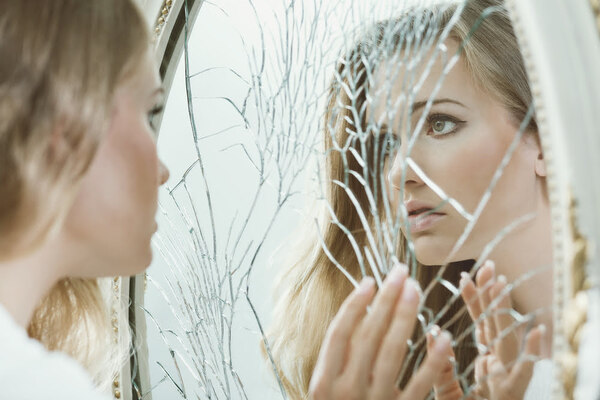 Our ego or self-esteem is how worthy we think we are. It’s part of our self-concept and self-image- how we view ourselves.

A person with a fragile ego has weak and inconsistent self-esteem. Their sense of self-worth is volatile and subject to the whims of life circumstances and others’ judgments.

People with fragile egos have an unstable sense of self. They keep changing their opinions and behaviors to gain approval from others. Because their self-esteem rests on shaky grounds, they need continual reinforcement in the form of reassurance.

Signs of a fragile ego

The over-reliance of people with fragile egos on external validation makes them behave in peculiar ways. If you suspect someone you know has a fragile ego, the signs to look for are:

We all get defensive from time to time, and usually for good reasons. But a person with a fragile ego gets defensive unnecessarily. They will overreact to the slightest perceived or honest criticism.

This happens because criticism shatters their ego. They constantly want to be praised by others because their self-worth heavily relies on other people.

A person with a fragile ego lacks confidence. They struggle to make their own decisions. They constantly seek validation for their ideas, opinions, and decisions. If they’re on the verge of making what they think is a good decision, they may back out at the last moment because someone wasn’t on board with them.

When people are hurt by those close to them, they’re likely to get over the hurt quickly. Their ego hardly gets bruised in the process.

In contrast, when you hurt someone with a fragile ego, you break the core of who they are. You destroy their whole world. Since their well-maintained ego is everything to them, they won’t forget your mistakes and will bring them up ages later.

People with fragile egos can’t handle failure and take it harshly.1 They feel worthless if they fail because they think failure brings them down in the eyes of others. The last thing they want.

People with fragile egos overcompensate for a weak and inconsistent self by deluding themselves into thinking they’re perfect beings. Beneath the mask of inflated self-image and narcissism lies a weak self-identity.

Perfectionism feeds into their fear of making mistakes and being seen as unworthy or less than perfect.

A person with a fragile ego is closed to negative feedback. They can’t stand it. As a result, they hardly improve. Again, admitting they need improvement would mean they’re less than perfect.

Their general attitude towards well-meaning advice by others is:

In the rare event where they listen to negative feedback, they take it personally. They interpret any feedback as a reflection of their self.2

They jump at every opportunity to impress others. They’ll take on projects they’re unprepared for or will take charge in a situation where they shouldn’t have just so they can impress others.

They’ll go to great lengths to impress others so they can keep feeding their hungry ego.

Effects of having a fragile ego

It’s easy to see the harm that having a fragile ego could cause in one’s professional and personal life.

Perfectionism is the ultimate productivity-killer.

Being closed to feedback and unable to handle criticism means staying at the same level and never improving.

Indecision impedes proactivity, and the fear of failure leads to never trying anything new.

Seeing feedback as a threat and ascribing ill-intent to people where they meant no harm sours relationships.

Not apologizing for your mistakes makes you come across as too self-centered.

How to overcome a fragile ego

The antidote to a fragile ego is a stable ego. Those with a stable ego or self-esteem maintain a consistent self-image.

How do you achieve a consistent self-image?

It comes down to how you build your identity. The more your identity is built on stable foundations, the less volatile it is.

You can identify the things you identify with by asking yourself the “Who am I?” question. The answer to that question will reveal the structure of your identity.

When you base your identity on more solid foundations like your personality, skills, and values, you develop a strong sense of self.

Sure, you may lose that job, but your ego doesn’t shatter. You still see yourself as a skilled person who can get another job.

Another strategy is to base your identity on multiple things. This way, your self-esteem remains well-diversified, and if there’s one point of failure, your ego still stays strong.

Additionally, you’d need to develop healthy beliefs around perfectionism, failure, and criticism. This will take some mental work, but you’ll get there.

Next time you complete a less than perfect project, remind yourself that it’s okay not to be 100% perfect all the time. With practice, this thinking pattern will become habitual.

Similarly, you can learn to handle failure and criticism well by reminding yourself that they’re critical for growth and improvement. When you experience this first hand, you’ll no longer need reminders.

Over time, you’ll develop a stable sense of self and gain what researchers call self-concept clarity.3

You’ll become less and less reliant on the approval and validation of others.