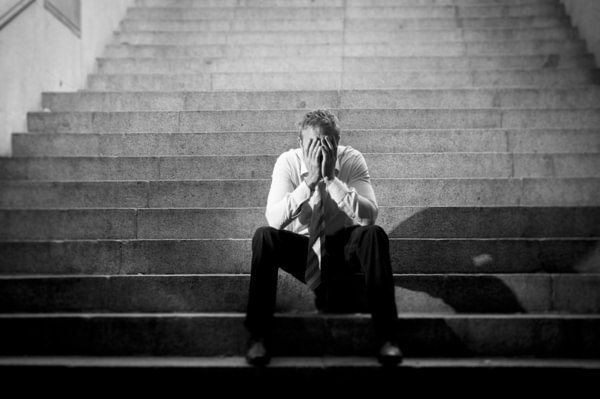 Hitting rock bottom is one of the most unpleasant experiences in life. When you’re at the lowest point in your life, you get bombarded by all sorts of unpleasant emotions- fear, insecurity, doubt, frustration, hopelessness, and depression.

As I’ll explain later, whether or not you bounce back from hitting rock bottom entirely depends on how you handle these negative emotions. But first, let’s understand the forces operating in our minds when adverse life events stifle our progress.

There are ups and downs in everyone’s life. Usually, these ups and downs are not very steep. When there’s an ‘up’, you feel happy. You’re making progress. You feel at ease.

When there’s a ‘down’, you feel something is wrong. You get anxious and worried. You either fix things, or things fix themselves over time.

Here’s what this normal rhythm of life looks like:

When we’re at a low point in our life, an upward restraining force in our psyche motivates us to maintain a level of happiness and progress. It kicks in to push you back up.

This force manifests in negative emotions like fear, hopelessness, and depression. These emotions are painful because the mind knows that pain is the best way to alert you.

But because the lows are not too low, the negative emotions at this level aren’t that intense. It’s easy to soothe yourself with pleasurable activities to dampen the pain or let time fix the minor problems.

Every action has an equal and opposite reaction. The upward restraining force of negative emotions when you’ve hit rock bottom is much stronger. It’s tough to ignore the pressure that gets created in your mind- the pressure to bounce back.

At this point, many people still choose to deny their negative emotions and try to escape their pain. Since the pain is more intense now, they use more drastic coping methods such as drugs.

On the other hand, those who acknowledge the storm of their raging negative emotions are pushed into a state of high alert. They realize things have gone terribly wrong. They reflect on their life and are forced into action.

Their survival mechanisms get activated. They feel a drive and energy to fix things they’ve never felt before. They’re willing to do whatever they can to set things straight.

It’s like when the morning alarm on your phone is on low volume, you’re unlikely to wake up. But when it’s loud, you spring back to wakefulness and turn it off.

Per Newton’s third law, the progress that comes out of hitting rock bottom is much more remarkable. It’s in direct proportion to the intensity of the upward restraining force.

If you want significant progress, you have to hit rock bottom

Having too many moderate lows in life can actually be a threat to your progress. You become complacent and don’t feel the urgency to make progress. You remain at the same, safe level for too long.

“Ease is a greater threat to progress than hardship.”

We all hear stories of people who achieved great things after hitting rock bottom. Their highest point in life came after their lowest point. They’re not special and blessed. They just responded to their negative emotions appropriately.

They didn’t hide from themselves and their life situation. They took responsibility and took action. They fought and clawed their way to the top.

The great thing about bouncing back higher after hitting rock bottom is that you build your resiliency muscle. You gain confidence, and your self-esteem rises.

Compare this to a person who never felt any significant discomfort in life. There’s a constant “things are okay” program running in their mind. They don’t feel a sense of urgency. It’s mathematically unrealistic to expect significant progress from them.

It all comes down to knowing yourself, the ability to reflect, and being emotionally intelligent.

What to do when you hit rock bottom

The first step is feeling and acknowledging your pain. Avoiding pain is easy, but its costs are too high. Every time you get a feeling you can’t shake, don’t. The mind’s trying to tell you something important. Instead of trying to shake it, sit with it and listen to it.

The second step is reflection. Reflect on why your mind is smashing alarm bells. What series of life circumstances brought you to where you find yourself?

The final step is taking action. Unless you do something, things won’t change. While time can help you get over minor inconveniences, it hardly helps with hitting rock bottom.

Your bouncing back will be proportional to the massive actions you take, propelled by a flurry of intense negative emotions.

A mental hack to keep progressing

Once you’ve reached a certain level of progress, you start to get comfortable. As you can see, this is a dangerous position to be in.

You always want to have new mountains to climb.

Since you haven’t actually hit rock bottom, how do you convince yourself that you have?

This goes against conventional wisdom, but the way to do it is to assume that the worst will happen. Think about what’s the worst thing that can happen to you. Imagine that it’s actually happening.

When you get there mentally, your alarm bells will start ringing again. You’ll feel that drive and hunger again. You’ll get out of the tempting trap of comfort and keep striving, moving forward, and climbing new mountains.

This is why people who’ve previously hit rock bottom seem to be on an upward spiral of success. You wonder how they get so much done. Something happened in their past that set off their mental alarm bells that haven’t quite quieted down ever since.