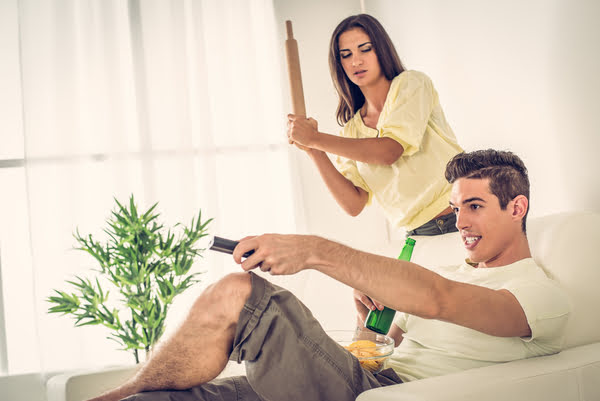 Physical violence in any shape or form is generally unacceptable and illegal. I say ‘generally’ because, in some situations, it can be okay and even necessary. Self-defense, for example.

Many may find that hard to believe. The first thing that comes to people’s minds when they hear ‘intimate partner violence’ or ‘domestic violence’ is a man hitting a woman.

Men are prone to express aggression physically. Their acts of physical aggression are typically more severe and damaging than women. In contrast, women can be brutal when it comes to verbal or emotional abuse.

Because men tend to be physically stronger than women, it’s easy for them to physically overpower women. They may not win at verbal or emotional abuse. But when it gets physical, they have an advantage.

Thus, men are believed to be the common perpetrators of physical violence in intimate relationships because they do the most damage.

Also, physical abuse of men by women is likely to be under-reported because many men feel their manhood is undermined if they reveal they’re being physically abused by a woman.

This leads to ambiguity

There’s some ambiguity around the question:

“Is it normal for my girlfriend to hit me?”

Some will say ‘Yes’, and others will say ‘No’. The logic that runs in people’s minds when they hear that question is:

“Since a woman is physically weaker than a man, she can’t possibly harm a man physically. Therefore, it’s okay for her to hit a man. She can do no harm.”

In contrast, there’s no ambiguity around the question:

“Is it normal for my boyfriend to hit me?”

The answer is a resounding “NO!”. Violent images of men hitting women fill up people’s heads when they hear that question, and they become furious.

Imagine you’re traveling on a train. A man steals the wallet of a fellow passenger and gets caught. The wallet is immediately retrieved from him, and he gets slapped and punched.

Imagine the thief was a woman in this scenario. The passengers may find it hard to believe that a birth-giving, ever-loving, and ever-nurturing woman can do such a thing. They’ll wear a look of surprise and confusion.

Finally, someone, probably another woman, may retrieve the wallet from her and give her a good scolding. She won’t get beaten at all. Nobody will touch her. Even though the crime she committed was the same as the man in the previous scenario.

A movie released in our country recently caused a massive controversy because, in it, the male lead slapped the female lead. The film was called ‘toxic’ and ‘promoting abuse’.

Yet, I have seen countless films since childhood where the female lead slapped the male lead. No one ever raised a voice against those films.

It is somehow okay for a woman to slap a man if his behavior is obnoxious. But there is no reason to hit a woman ever. No matter how obnoxious she may be.

Why such double standards?

Both men and women believe that women ought to be physically protected. Because women are physically weaker and have to bear babies, they’re the primary reproductive vehicle for society.

Since society cares about reproduction the most, it goes out of its way to protect women physically.

It also makes men more likely to get accused of physical abuse unfairly.

Many men are terrified of hitting a woman, especially publicly.

And they should be. Both men and women should be. Physical violence is not okay.

Is it normal for my girlfriend to hit me?

In some situations, it can be normal and okay for your girlfriend to hit you. In other cases, it’s not normal or okay.

First, you should look at the context in which she’s hitting you.

Is the context friendly or hostile?

Your girlfriend might hit you when she’s playing with or teasing you. Some people hit others as an expression of love. There’s no intention to harm. There’s no sign of any negative emotion on their face.

But that doesn’t mean you have to condone it.

If you feel uncomfortable or harmed despite them having no intention to harm you, hitting you in such a situation is not okay. They should be able to recognize the signs of discomfort in you and cease immediately.

A hostile context is where your girlfriend or wife hits you with a clear intent to harm you. For example, when she’s angry or frustrated. Her facial expressions show she’s upset with you.

No matter what you did to upset her, physical violence is not justified in such situations. Despite what the media and movies tell you.

Other situations where your girlfriend hitting you is okay:

In hostile contexts, women hit men out of anger or frustration. It’s the way she expresses her negative emotions. She may have grown up in a household where you expressed your negative emotions by physically harming others.

Women may also hit men to intimidate them. They know they’re unlikely to be hit back, so they test boundaries of how far they can push men. Women should refrain from such acts of minor violence because they can put themselves in danger.

When men are pushed over the edge by a series of minorly violent acts, they usually resort to severe and damaging acts of physical violence.

Women may also hit men to test their physical and mental strength. This rough-and-tumble play usually happens during the courtship phase. The hitting in such playful or flirtatious contexts isn’t a cause for concern.

The typical response of men to such hitting is that they tolerate the hitting to show their masculine strength. It’s okay but only to a point. There’s a line that mustn’t be crossed.

She can’t be cutting you with a knife to test your masculinity. You have to draw the line somewhere (Not with a knife and not on a body).

Things to do when your girlfriend hits you

The first thing you should do is communicate your discomfort and pain to her. It’s possible she may not be aware of the impact her actions are having on you. You assertively ask her to stop doing it.

If she cares about you, she’ll stop.

The goal is to show her that this behavior is not acceptable.

You can also remove yourself from the situation to give her space to think about her actions. Don’t talk to her for a day or two.

She may not want to give up her control if she’s intimidating and controlling you through physical violence. She’ll say manipulative things like:

Don’t fall for these. She wants to continue her abusive behavior by tapping into your need to be masculine.

You can respond to such statements with something like:

“A real man stands up for himself when he’s harmed.”

Your first priority when you get hit should be not hitting her back. She may be setting a trap to convict you.

Another manipulative response she can use when you express your indignation at her hitting you is:

“I was just joking.”

She may be right. But if she cares about you, she’ll stop the ‘joking’ if she knows it makes you uncomfortable.

If her abusive behavior becomes a pattern, it’s best to leave the relationship.

Your second priority should be to determine whether the context is friendly or hostile. If you’ve been physically abused in the past or have witnessed physical abuse, you’re in physical threat-alert mode.

This means you’re more likely to perceive innocent or playful hitting as malevolent.

Whatever your feelings are about the situation, communicate those to your partner.