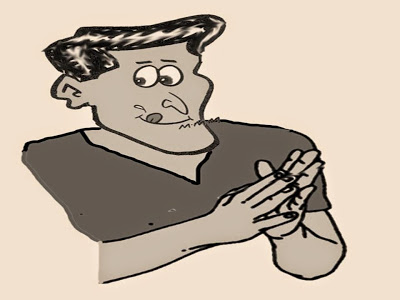 When you have to deliver a piece of good news about yourself, you’re likely to rub your palms together. For instance, “I just got promoted” or “I’m getting married soon”.

When you’re about to watch a movie you’ve been wanting to see for a while, you might rub your hands together as soon as the movie starts. Or, to give you a simple example, when you are about to eat your favourite meal you might do this gesture as you go “mmmm…”

Speed of rubbing hands together

The speed at which a person rubs their palms together can convey different meanings. While rubbing the palms quickly can show a positive expectation for oneself, rubbing them slowly can have two meanings:

Suppose you’re negotiating a deal with a businessman. You tell him exactly what you want out of the deal and lay down your conditions. The businessman examines your terms and tells you, “I can give you what you want” as he rubs his palms together rapidly.

At this point, you can be sure that the deal he is about to offer you is great for him or he wouldn’t have rubbed his hands that way.

Now, after he presents the deal, say you tell him, “Oh! I forgot to mention one other condition…” and you mention a condition that is unfavourable for him.

At this point, you might observe the businessman rubbing his hands slowly with a concerned expression on his face. It is clear that he now has doubts about the deal and probably believes that the deal is no longer great for him.

It’ll be a good idea to ask what’s bothering him before he verbalizes his “no”.

Once people have said “no”, it’s hard to convince them and make them change their statement. You might even consider withdrawing your latest condition just to save the deal.

So just by observing how they rub their hands, you might be able to detect rejection before it happens. This can allow you to change your approach before the other party makes any concrete decision.

This gesture happens in slow motion and signals doubt or uncertainty. The fingers of one hand (usually the right) rub slowly in the upward and downward motion on the palm of the other hand.

This gesture is often accompanied by the clenched hands gesture that conveys self-restraint.

You might see people doing this gesture when they need to make a hard decision but are confused.

Say you asked someone to make a decision. You see them do this gesture and then clench their hands. You need to change your approach so that they can break their position of self-restraint.

Interestingly, giving them something to hold, like a pen or a cup of coffee, may be effective in letting them adopt a more open attitude.

Rubbing the palms on the lap

While seated, people might rub their hands on their lap when they’re stressed or nervous. It’s an accurate indicator of discomfort and is often missed under the table. It’s frequently observed when a person is about to stand up and leave an uncomfortable social situation.

When we’re trying to express our harmless attitude to an animal, we rub its fur repeatedly with our palms. We expect that this will pacify the animal.

Similarly, when we rub our palms on our lap, we’re trying to pacify ourselves because we are emotionally uncomfortable.

Displaying the palms is a universal gesture of honesty and openness. When someone talks with palm displays, you can be fairly certain that the person is telling the truth.

If palm displays signal honesty, it follows that hiding the palms signal dishonesty, right? Not necessarily.

Sometimes, hiding palms could mean that the person is lying, but it’s not a reliable cue because a person might unconsciously want to hide from you for several reasons besides lying.

For example, if a person is nervous or has self-image issues, they might hide their palms in their pockets even when they’re telling the truth.

Merely believing that you’re caught in an awkward situation may lead you to ‘hide’ by putting your hands in your pockets.

The subconscious mind has its own reasons that seem illogical to the conscious mind. It thinks that by making you put your hands in your pockets, it’s helping you to hide.

No one knows why we rub our hands when we expect or recall something positive. Perhaps it was a way for our ancestors to clean their hands before they ate.

Perhaps it was just a way for them to keep warm in cold climates and the behaviour got somehow associated with positive expectations.

I can’t wait to find out the real reason (rubs hands).