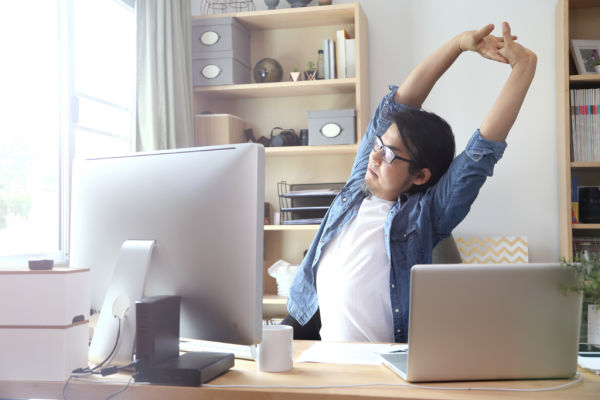 Yawning and stretching arms can occur independently, but when they occur together, the gesture is called pandiculation.

Pandiculation is an involuntary gesture where a person stretches one or both arms above or to the side of their head. The stretch can also be felt in the upper back region.

When done standing, the gesture sends a wave of tension and relaxation throughout the body and the person lifts their heels for a moment.

Stretching the arms above the head and yawning can sometimes be accompanied by a brief closure of the eyes. Sometimes, the torso may be twisted from side to side.

All vertebrates are known to pandiculate rather similarly. Dogs and cats do it multiple times a day. Horses, lions, tigers, leopards, birds, fish, all do it.

This shows that pandiculation is an evolutionarily old behavior that has been retained in us since the earliest vertebrates.1

Human babies innately do it. Even the human fetus does this gesture in the womb at about 12 weeks after conception.2

Note that voluntary stretching before a workout session or yoga is not pandiculation. Pandiculation is involuntary and controlled by the older, more instinctual parts of the brain.

When do we stretch our arms above our heads?

This gesture may be done when we wake up in the morning and when we’re about to sleep. Yawning is more common than stretching your arms when you’re about to sleep and, in a moment, you’ll learn why.

Usually, this gesture is done after a long period of physical inactivity. For example, you might catch yourself doing it after you’ve been sitting in one spot for long.

Sleep, of course, is also a long period of physical inactivity.

Why do we pandiculate? The physiological angle

When you sleep or sit in one place for a long time, your muscles sort of get used to not moving. Stretching is the body’s way to get your muscles ready to move again. It sends a cascade of signals to the brain’s muscle control center, re-forging connections between the sensory and motor control areas.

In animals too, pandiculation has been observed to occur during transitions from periods of low to high activity.

This gesture relieves any tightness or constrictions in the muscles, reducing the chances of pain, injury, or spasms.

Psychological reasons for stretching and yawning

Why exactly we yawn is somewhat of a mystery. Still, there are some good explanations that make sense.

The explanation that makes the most sense is that yawning allows the brain to switch from inattentional or resting state (not paying attention) to an attentional state (being alert).3

In other words, yawning is a way your brain tries to get back online. It’s an attempt to pay attention after a period of inattention.

This explains why we yawn when we wake up in the morning. We’re trying to bring our brain back online after a long period of unconsciousness so we can attend to our environment.

It also explains why we yawn when we’re about to sleep.

On one hand, your brain and body are tired and want rest. On the other, you want your brain to focus on your work or studying. The conflict leads to continual yawning- the brain’s attempt to keep you alert despite not wanting to.

Yawning and stretching, despite occurring together often, may happen for different reasons.

Say you’re speaking at a conference. When you finish your hour-long presentation, you notice that some audience members stretch their arms, some yawn, and some do both.

It’s tempting to think they found your speech boring. However, having gone through this article, you can’t jump to that conclusion so easily.

Stretching, with or without yawning, likely happened because they had to sit in one place for a long time.

Hence, boredom is just one possibility out of many.