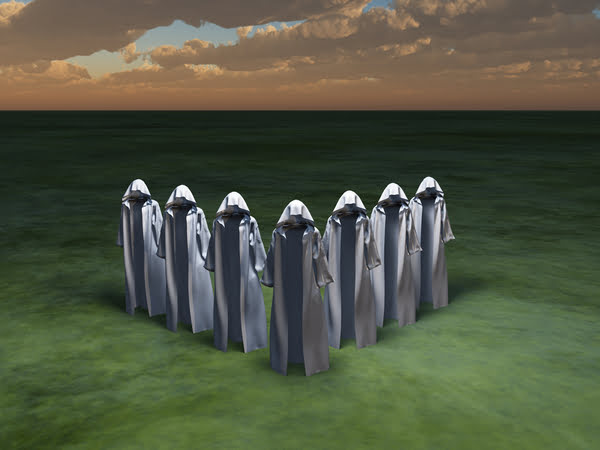 The word ‘cult’ comes from Latin cultus, meaning care; cultivation; culture; worship. A cult has a culture of its own. Cults have a cult leader, usually a male, and cult followers.

A cult leader and his followers are bound together by shared beliefs, practices, and rituals that are considered deviant by the mainstream belief systems of a society.

We see the leader-followers dynamic everywhere in society, from political systems to business organizations. What separates a cult from other groups with leaders and followers?

Cult leaders, unlike other leaders, eventually incur some kind of harm to their followers. This harm may or may not be intentional.

A cult leader may genuinely believe what he believes and draw followers in with his convincing power. Other cult leaders aren’t so delusional. They’re manipulative and know full well they’re conning their followers.

Who joins a cult and why?

Joining a cult can satisfy many human needs.

First, joining a cult and believing what the cult believes satisfies the basic human need of wanting to make sense of the world. There are many unanswered existential questions that many belief systems do not provide a satisfactory answer to.

So, a cult that attempts to answer those questions tends to draw people in.

Second, joining a cult satisfies the basic human need to belong to a community. People who see themselves as misfits in their current social environments are more likely to join deviant groups that better reflect who they are.

So, a cult whose beliefs and values resonate with someone will likely give them a sense of belonging, community, and acceptance.

Third, people going through a transition in life or an identity crisis are vulnerable and more likely to join a cult. The cult provides a stable identity they can latch on to and resolve their crisis.

Lastly, people find it much easier to be a follower than to think for themselves or become a leader.

Who forms a cult and why?

To understand the psychology of a cult leader, you have to think of them as someone trying to boost their status in society by projecting dominance. Status and dominance often go hand in hand. This is true for both animal and human communities.

Males have a lot to gain by raising their status. Doing so helps them gain better access to resources and potential mates. This explains why almost all cult leaders are men.

Now, there are two ways for men to gain status. The slow and long path of hard work and success or the quick path of projecting dominance.

Why does projecting dominance work?

Projecting dominance and confidence has a magnetic effect. It makes people believe you’re high status. People want to follow those who have confidence and firmly believe what they believe.

Usually, the cult leader, not cult followers, ends up in a better place. As soon as he gets a decent following, the real motives of the cult leader come to the fore- status, power, riches, and sexual access to females.

Cultish behavior can also be seen on social media, where some influencers display dominance and arrogance. They frequently share controversial views to gain a cult-like following.

Below is an exhaustive list of the common characteristics of cult leaders:

Cult leaders believe they’re special and are on a special mission to lead humanity to the light. They have fantasies of unlimited success and power. They’re constantly seeking the admiration of others and enjoy being the center of attention.

Charisma is the ability to draw people to you by your charms and personality. Cult leaders tend to be highly charismatic. They’re masters at expressing their feelings and making their followers relate to them. Their social skills are above par, and they tend to have a good sense of humor.

As discussed earlier, projecting dominance is key to becoming a cult leader. Nobody wants to follow a submissive leader unsure of himself. A big part of dominance is putting down other dominant figures of society so you can look better than them.

This is why politicians, who share a lot of traits with cult leaders, demonize, belittle and defame their competitors.

Projecting dominance helps cult leaders create a power imbalance between them and their followers. They’re high status, and their followers are of low status. If the followers obey and do as they’re told, they can raise their status too. They can be in a better place too.

In this way, cult leaders prey upon the low self-esteem of their followers.

5. They claim to have supernatural powers

Cult leaders do this to highlight the power imbalance.

“I’m special. I have access to supernatural powers. You’re not special. So, you don’t.”

Cult leaders may claim they have magical powers like talking to aliens, healing, or telepathy.

Again, to remind their followers that they’re above them and to reinforce their high status.

Lack of empathy is the hallmark of sociopathy/psychopathy. Sociopathic/Psychopathic tendencies make it easier for cult leaders to harm their followers without remorse.

Some cult leaders may suffer from mental illnesses like schizophrenia or temporal lobe epilepsy. These mental health conditions can induce psychosis or hallucinations. So, when they say they can talk to aliens, they may genuinely believe they do.

What’s interesting about this is that they can pull other people into their psychosis. As a result, the followers, driven by the conviction of their beliefs, may also see things that aren’t there. This condition is called shared psychotic disorder.

Cult leaders are excellent marketers. They have to be, or they won’t be able to gain followers and raise their status. They know what makes people tick. They know how to cater to the basic needs of their followers.

Cult leaders tend to control every little aspect of their followers’ lives. What to wear, what to eat, what to say, what not to say, and so on. This is done to keep the followers in line and reinforce their low status and low power.

Some cult leaders also use fear and blackmail to control and retain followers.

Jim Jones, a cult leader responsible for 900 deaths, forced his followers to sign fake confession documents of criminal acts to blackmail them and deter them from leaving.

For instance, a cult leader may demand sexual access to female followers, making a ridiculous claim such as “This will purify our souls” or “It will bring us to a higher plane of existence”.

Who is desperate to boost their status in society?

This is why cult leaders are often underdogs. They’re rejects who failed at multiple attempts to raise their status and are now resorting to desperate and unethical measures.

Who can relate to an underdog?

Of course, other underdogs. Other low-status people.

This is a big reason why cult leaders attract so many followers.

Essentially, cult leaders and followers band together to ‘overthrow the system’ rewarding rival human groups. They want to overthrow other high-status people so they can be high status.

For this to happen, the cult leader must be an underdog so his followers can relate to him, but he must project dominance at the same time. An unusual mixture of being low status but projecting high status.

Cult leaders can become enraged when they’re criticized. To them, criticism is a threat to their high status. That’s why they resort to extreme measures to prevent any criticism. Those who criticize are severely punished, humiliated, or even eliminated.

Cult leaders infuse their followers with inspiration and hope for a better future (high status). They’re visionaries who want to take their followers to a better place where they can be blissful and better-off than non-followers.

All groups have cultish tendencies

A group can quickly become cult-like when there’s excessive admiration and adoration for the group leader. Being part of a group and following a group leader in hopes of reaching the promised land of high status and bliss is a deep-rooted desire of human nature.

It stems from ancestral times when humans lived in patriarchal groups and fought rival, genetically dissimilar human groups for land and other resources.

But this primal tendency has caused, and continues to cause, many problems for humanity.

In a free society, people should be free to join any group they want, provided they cause no harm to themselves or others. If you agree with me, you’re welcome to join my cult. Sorry, I meant group.