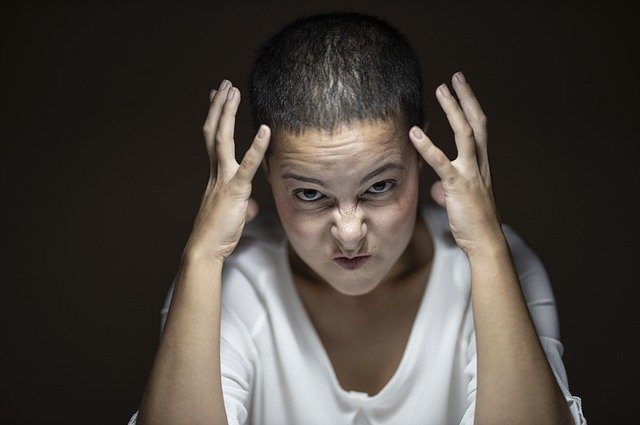 The eyes are narrowed to produce an intense stare. The staring effect is produced mainly by raising the upper eyelids. The lower eyelids may also be slightly raised or tensed to produce the focusing eye movement.

You are likely to see wrinkles on the nose because of the flaring of nostrils. Nostril flaring allows more air to enter the lungs so that more blood is oxygenated. This way, more energy is produced to carry out the strong assertive action that anger usually demands.

Lips may either be closed or open. When closed, lips are usually pressed together so that wrinkles appear on them. This also makes the lips appear thinner than their normal size.

When open, the lips usually form a square or a rectangular shape whilst exposing the teeth, our most primitive weapons.

Exposing the teeth allows a person to threaten their source of anger and often precedes shouting or screaming, an extreme sign of anger.

A person may thrust their lower jaw forward when making the anger expression. Also, the jaws may be clenched for a moment, producing a transient depression on the cheeks.

It’s almost as if by clenching the jaws and pressing the teeth together, the person is symbolically ‘biting’ his source of anger.

If you see all or most of these expressions, the person is feeling angry. If you only see one or two of these signs, then anger may be in its initial, weaker stage or the person may be trying to suppress their anger.

For example, we may see this facial expression in a person lifting weights or looking at a bright light (physical difficulty). We may also see it in someone who is confused, concentrating on something, feeling determined, or even disgusted (mental difficulty).

Pressing the lips together is a part of the facial expression of anger because we press our lips together when we are engaged in any strong physical or mental exertion.

Anger prepares us to take strong action, making us press our lips together. But if other signs of the anger expression are not present, then thinning the lips by pressing them may convey some other physical or mental exertion.

For example, lifting weights, feeling determined, etc. as mentioned above.

Interestingly, people see those with naturally thin lips as short-tempered and hostile. It’s because, in anger, the lips become thinner and we mistakenly think, at a subconscious level, that the person who has thin lips is an angry person.

The woman has lowered her eyebrows and drawn them together forming a ‘V’; raised upper eyelids and slightly raised lower eyelids; lips open exposing the teeth. She has probably clenched her jaws because she has pressed her teeth together and a depression is visible on her left cheek.

The man in the above picture is showing extreme anger, doing everything he can to threaten the source of his anger.

He has lowered his eyebrows and drawn them together forming a V. His upper eyelids are so intensely raised that it’s hard to notice that the eyebrows have been lowered and drawn together. Lower eyelids are also raised intensely, nostril-flaring is extreme, pushing the wrinkled nose to the sky. The mouth is open and teeth dangerously exposed.

Though not a facial expression, notice how he brandishes his fingernails as if they were claws. Interestingly, human fingernails are indeed flattened claws that got flattened somewhere down in the line in our evolutionary history.