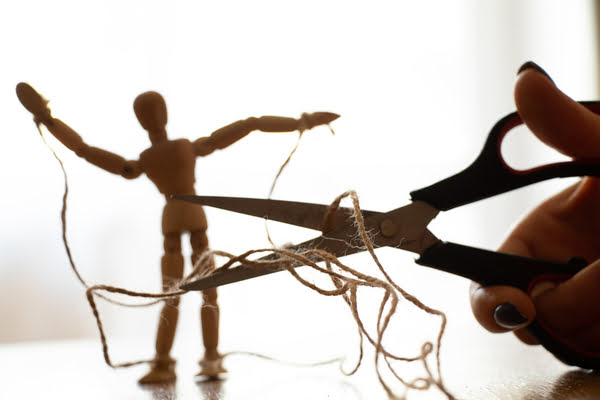 Humans have a fundamental desire to be free and in control of their lives. They want to be able to do what they want with minimal restrictions on their freedom. A relationship tends to steal away some of that freedom because there is interdependence in a relationship.

One partner’s choices affect another. Each partner tries to influence the other.

There’s nothing wrong with influencing one another in a relationship but you can do it too much.

While some loss of freedom is expected in a relationship, if there’s too much loss, we have a problem. It indicates there’s no equality in the relationship. One partner is being controlled, and the other is controlling.

One partner loses more of their freedom than the other partner.

How do you know if you’re being controlled in a relationship?

It all starts with a feeling.

The feeling of being controlled, violated and exploited.

When your partner crosses a boundary or tries to exert control over you, you feel wronged.

It’s important to remember that feelings are not facts. You may be right in concluding that your partner has been controlling, or you may be wrong.

Emotions and feelings have a way of swaying us. When you feel wronged by your partner, emotional inertia kicks in, and you start to think about all the times in the past when they made you feel the same way.

You’re essentially trying to fit facts into your feeling. This can make you biased. You end up ignoring all those events where your partner didn’t violate your boundaries or where you were controlling.

Just because your emotions make you weave a pattern doesn’t mean there is no pattern.

This is why figuring out whether or not your partner is controlling is a challenging hurdle you must overcome. Before taking steps to stop being controlled, you must ensure that you’re indeed being controlled.

Here’s a step-by-step guide to determining whether or not you’re being controlled in your relationship:

Acknowledge that you feel controlled and wronged, but don’t easily give in to these feelings. We have more work to do.

If you feel forced to do something, communicate it to your partner assertively. If they’re a good partner, they won’t dismiss your feelings. If they’re interested in controlling you, they’ll invalidate your feelings.

They may even feel bad for you feeling bad. This is manipulative and communicates:

“I don’t care about your feelings. But you should care about mine and comply with my wishes. If you don’t, I’ll feel bad.”

Or they may become more aggressive in pushing you to comply. They’ll say they won’t take “No” for an answer. But you’re supposed to take their “No”. When you say “No” to them, they’ll “No” your “No”, saying something like:

One or two such incidents where they push you to comply with disregard to how you feel are forgivable. It may be a misunderstanding. What you need to look for is a pattern of such behaviors.

If such a pattern exists, you’re likely being controlled in the relationship, and your feelings are correct.

This is an important concept to grasp before we discuss how to stop being controlled in a relationship.

That feeling of being wronged is essentially the detection of a threat. Because you think your partner is controlling you, you feel threatened.

Trying to verify these feelings is all about ensuring you’re not over-detecting threats.

Humans are emotion-driven species that are quick to detect threats. Over-detection of threats comes naturally to us, which is why it is essential that you take steps to verify that your feelings of being controlled are accurate.

If you over-detect being controlled in a relationship, you’re likely to blame your partner unfairly. As mentioned above, one way to overcome this problem is by communicating your feelings to your partner and seeing how they respond.

Another way is to try and see things from your partner’s perspective. Try and see where they’re coming from.

Here, you need to use the filter of reasonableness and ask yourself:

“Is what they’re asking me to do reasonable?”

If you don’t think it’s reasonable, communicate it to your partner. If they’re not interested in controlling you, they’ll understand and try to reach a compromise.

You can also fall into the trap of under-detection of threats.

If you don’t communicate to your partner that you feel controlled, you’ll end up bottling up your feelings. The resentment will slowly build up no matter how well you rationalize away your feelings.

The goal, therefore, is to detect a threat when there is an actual threat. Then, to communicate your feelings about being threatened assertively.

How to stop being controlled

I won’t go into why people are controlling in a relationship. There can be many reasons. The controlling person must work on themselves to uncover those reasons and change their behaviors.

Since many people aren’t willing to work on themselves, encouraging them to do so can be a waste of time.

Instead, I’ll focus on what you can do to stop being controlled in a relationship. You have full control over yourself but not over another person.

First, you must realize that you’ve been feeding a pattern. Your partner wouldn’t have become controlling if you hadn’t allowed it in the first place. Yes, you’re equally to blame for perpetuating the dynamic.

The thing about unhealthy relationship patterns that you get stuck in is that you can stop feeding those patterns anytime you want. All you have to do is figure out how you’re contributing to the pattern. And then stop doing it or do things differently.

In the controller-controlled relationship dynamic, you feed the pattern by giving up control- by allowing yourself to be controlled.

When you do that, be prepared to face some resistance from your partner. They’ve probably gotten used to controlling you. Your refusal to partake in the dynamic will be new for them. It’ll take them some time to wrap their heads around it.

In an equal relationship, both partners can say “No” to each other and take a stand for themselves.