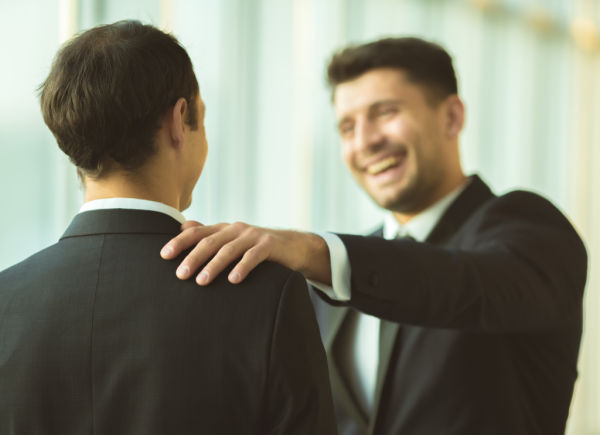 Patting another person’s shoulder is common in social interactions. This body language gesture is highly context-dependent. Who does it and when determines what it means.

In this article, we’ll explore all the possible meanings of ‘pat on the shoulder’ body language gesture. After that, we’ll discuss the meaning of a closely related ‘resting hand on someone’s shoulder’ gesture.

A person’s shoulder may get patted from the front, behind, or sideways. Front and behind are more common than sideways. Let’s look at the possible meanings behind this gesture:

So we do the next best thing- we pat them on their shoulder. This is the simplest meaning of this gesture. Sometimes people tap on others’ shoulders just to get their attention.

2. Asking someone to disengage

Imagine you’re in a line, checking out at a store. When the cashier gives you back your change, you spend too much time counting it. The customer behind you gets impatient and pats on your shoulder.

In this context, they don’t want your attention; they’re asking you to finish the job and leave.

Imagine a technician trying hard to fix a machine. Another technician grabs a tool and wants to have a go at it. To signal the first technician to disengage, he taps him on the back, communicating:

While getting a pat on the back is a common gesture signaling, “Well done”, patting someone’s shoulder often conveys the same meaning. It’s done by a superior to their subordinate.

For example, a boss may pat the shoulder of their employee who’s done splendid work.

The key thing to note about this meaning is that it’s a dominance gesture. When your senior pats your shoulder in a “Well done” manner, they’re asserting their superiority over you. They feel a little ego boost when they do it.

Of course, you feel good as a receiver of this gesture because you accept their authority over you. So you let them dominate you.

Things get interesting when this gesture is done by someone who has the same authority as you, lower authority than you, or whose higher authority you don’t accept.

In such cases, you might feel offended and annoyed. You feel they’re asserting dominance over you. The best thing you can do to counter this is to pat their shoulder back. That way, you’d have rebalanced the authority.

When someone close to you pats your shoulder, it’s often a sign of intimacy, sympathy, and affection. We willingly allow people close to us to invade our personal space and touch us.

Imagine you’re struggling with a problem and share it with a bunch of friends. Among those friends, there are only a couple you consider your close friends. When they tap on your shoulder, you feel cared for.

How would you feel if a friend you’re not close to also tapped on your shoulder, expressing sympathy?

5. An excuse to touch

In workplaces, patting someone’s shoulder can be a good excuse to touch someone. Bosses can easily get away with it because it comes across as them caring for or appreciating their employees.

Following situations increase the chances that your employer pats your shoulder just to get a chance to touch you:

Sometimes a person goes a step further from patting and rests their hand on your shoulder. This has to be, by far, one of the most annoying body language gestures.

First off, the person seems to have permanently invaded your personal space. You feel tied to them as your movement is restricted.

We’ve all had a friend who’s like this. You’re talking to them and suddenly they’ll rest their hand on your shoulder.

They may do it out of affection but it makes them look insecure and needy, as if communicating:

When we rest our limbs on some object or space, we’re communicating ownership over that object or space. For instance, people leaning on their cars when clicking pictures. Another example would be bosses stretching out their legs on their tables.

So when a friend or an acquaintance rests their hand on your shoulder, they’re communicating:

It makes you feel like you’re some object or a pet and they’re your owners.

To break this gesture without appearing rude, I suggest finding a valid excuse to move or leave. Such as picking something from the ground or greeting another friend.

Heck, you could deliberately drop an object you might be holding and then bend down to pick it up, breaking the gesture.

From dominant to affectionate to creepy

I once had an employer who had this weird habit of resting his hands on my shoulders. He would then squeeze and pat my shoulders hard. By the way, he did this to every other male employee for some reason.

It’s one of the weirdest experiences I’ve had. I remember feeling a cocktail of emotions when subjected to this torture.

Before doing it, he’d always ask, “How’s the work coming?”

It wasn’t a gesture of appreciation because the work wasn’t finished yet, obviously. It was clearly a gesture of dominance. The hard squeezing and patting communicated:

“I have significant power and control over you.”

But because the gesture was too physical and invasive, it also felt like they were trying to be friendly and warm. You know, like how men often bond by hitting each other.

All in all, it was very unprofessional and creepy behavior. All other male employees were visibly discomforted when subjected to this behavior. Their facial expressions and body movements screamed:

“Get off my back! What’s wrong with you?”