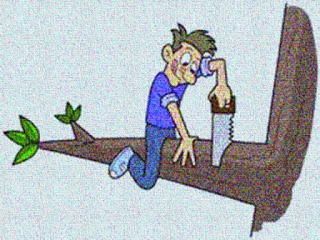 In this article, we discuss self-sabotage behavior, reasons why people engage in this behavior, and common examples of self-sabotaging behaviors.

How many times do you hear people telling you, rather sanctimoniously, “Be yourself”? And to complete the famous Oscar Wilde quote, they add, “Everyone else is taken”.

What makes you, you?

When you were born, you had very little idea what to do with yourself. Except for some genetically programmed behaviours, your mind was a clean slate, ready to learn things from the world at an astonishingly fast rate.

You copied the behavior of your parents, your siblings, and all those who surrounded you. Your subconscious mind was fresh and fertile and the things that it learned turned into your core beliefs instantly. The main purpose of the formation of this belief was to ensure your survival by letting you quickly adapt to your immediate surroundings.

The beliefs that you formed in the first six years of life comprise your core beliefs and these are the hardest to change. As you moved through adolescence and into adulthood, the life experiences you went through continued to shape your psyche and modify your beliefs.

Most of your behavior is nothing but the manifestation of these beliefs. They’re programs that you carry out throughout your lifetime, mostly repeating what you copied from those that surround you.

You don’t have any identity of your own. Your identity is a mixture of the identities that you’ve come across in your entire lifetime.

This is the main reason why ‘a man is known by the company he keeps’ and why people resemble their parents in their behaviour so much. Some people mistakenly believe that people behave as their parents due to genetic reasons. But that’s not true.

Your parents’ genes may determine your looks, height or bodyweight but the reason why you act like them is because you had this innate proclivity to copy their behaviours as a child.

The concept of self-sabotage

If many of your beliefs are those that you received from your parents, teachers, priests and other authority figures that you spent most of your childhood with, then your mind will naturally repel all the information that seems to contradict these beliefs. The mind does what it can to protect its identity.

This is known as self-sabotage. If you were lucky enough to have a very positive, reassuring and empowering environment as a kid, then you’re likely to have similar beliefs about yourself and you’re likely to be very healthy psychologically.

But for most of us, that is not the case. The psyche of most of us is ‘damaged’ in one way or the other.

What do I mean by a negative environment? Parents who criticize their children a lot, teachers who punish children for making mistakes and uncles and aunts who give sage advice about what can and can’t be done in life comprises this ‘negative environment’.

As a result, when children in such conditions grow up, they develop some expectations about themselves and won’t go beyond these expectations even when they come across good opportunities, or worse, they try to sabotage such opportunities.

In other words, they won’t try to get what they believe they can’t have and if they do get it, they’ll get rid of it quickly so that their life remains consistent with their deeply-held beliefs.

To clarify the idea of self-sabotage, let me give you a few examples…
Arun’s dad always told him that life is hard and you can’t make much money without being dishonest. Arun’s family was very religious and valued honesty above everything else.

This programmed Arun’s mind with the belief, “To become rich you have to be dishonest and dishonesty is a bad thing. Therefore, I can’t be rich.”

When Arun grew up, he remained financially stuck at one level without understanding why. Though he wanted to make more money, he always found a way to ruin any opportunity that could mean more income.

Actually, it was his subconscious that was cleverly working in the background to prevent Arun from becoming rich because it had to maintain the belief that ‘all rich people are dishonest’.

Shazia was the eldest among her siblings, all of them girls. Her parents and relatives always teased her by pointing out that her sisters were much more beautiful than her and that she would be lucky if she found ever found a man.

Shazia’s mind turned this casual joke into a belief because it was repeated often and at a time when her mind was most malleable. She grew up to become a fairly attractive woman, but she still carried this belief in the dark corners of her psyche.

Though her attractiveness attracted the attention of a lot of men, every time she got into a relationship, it only lasted for a month or so. She was having great difficulty in maintaining relationships.

She found ways to end her relationship by being possessive and insecure but the real reason why she was doing all this was because of a casual joke that she got repeatedly got exposed to in her childhood.

Her subconscious was calling the shots and playing the real game. Every time she got into a relationship, her subconscious mind thought, ‘I don’t deserve this, I’m not pretty. Let’s see how I can get out of this’.

Another common example of self-sabotage is people who win a lottery. People who win millions in the lottery do not subconsciously consider themselves worthy of such huge amounts of money and so spend all the money within months so that they can return to the financial level that is consistent with their beliefs.

Acquire the beliefs of people you admire

There is no magic formula with which you can change your beliefs overnight that have taken years to form. The first step is challenging them. When you do that you will have gained power over your mind. The more you question your beliefs, the more likely it is that you’ll soon get rid of the ones that you don’t want.

Prove to your mind that its dearly-held negative limiting beliefs are wrong by gaining contradictory life experiences. Surround yourself with people who you’re willing to copy, who have the beliefs you want to have and the personality traits you want to develop.

By doing this you’d be using the natural tendency of the mind to your own advantage. When you surround yourself with the people you admire, your mind will start learning from them and copying them and gradually un-learn what it learned by copying others in the past. The mind is like water, it takes the shape of the vessel it is poured in.

Hi, I’m Hanan Parvez (MBA, MA Psychology), founder and author of PsychMechanics. I’ve published one book and authored 300+ articles and on this blog (started in 2014) that have garnered over 4 million views. PsychMechanics has been featured in Forbes, Business Insider, Reader’s Digest, and Entrepreneur. Feel free to contact me if you have a query.