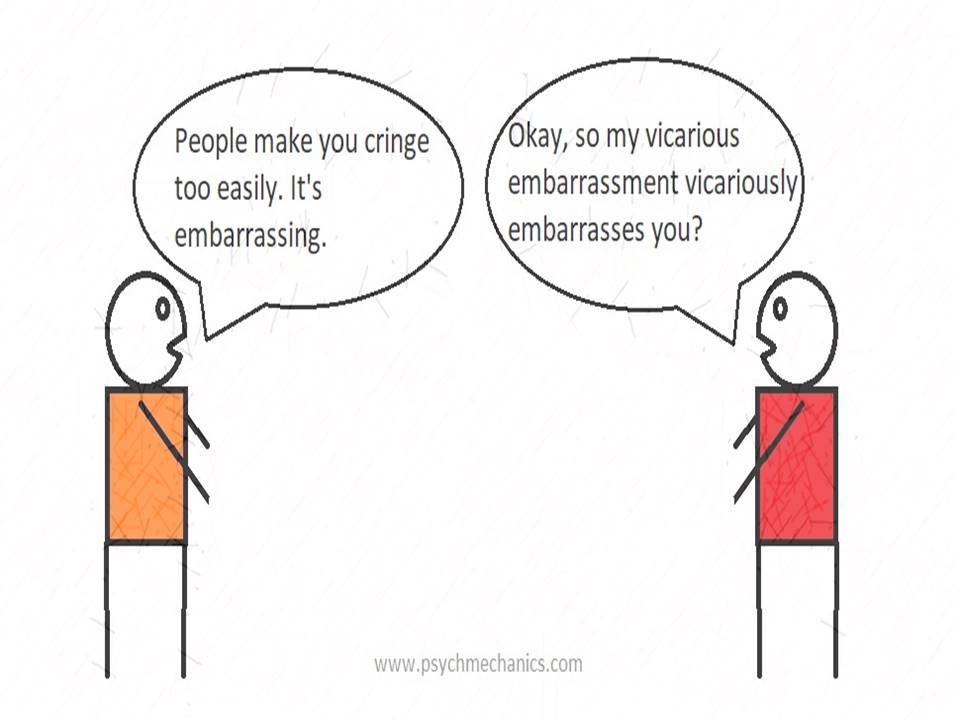 You show your friend a music video from your favorite band, hoping they’ll like it as much as you do. After about a minute into the video, your friend blurts out, “Ugh… the singer makes me cringe!”

You feel devastated, wronged, and slightly embarrassed. “Is this supposed to be cringe-worthy? I didn’t realize this was cringe-worthy”, you think to yourself, starting to believe that the video is indeed cringe-worthy to some extent. You point out the other upsides of the video to your friend, “But hey, his voice is good don’t you think? Wait till you hear the guitar solo near the end”. Deep down, you know the damage has been done.

What this situation describes is one of the many human interactions that generate cringe in people. Why do we cringe at certain behaviors and not others? What generates this response?

To understand cringing, it helps to first and foremost look at the body language and facial expressions assumed by the person engaged in the behavior of cringing. Typically, the eyes are narrowed, the head is pulled back and sometimes shaken, the nose is wrinkled, and, in extreme cases, people imitate vomiting when they cringe.

We tend to close our eyes when we see something we don’t like (a gory scene in a film), the nose wrinkle is a trademark of disgust (when you smell rotten food), and imitating vomiting successfully communicates to your fellow humans how disgusted you are by the situation that has transpired.

So cringing is avoidance behavior. Your non-verbal signals indicate that you’re trying to avoid something. Cringing when you see a gory scene in a movie or when someone tells you a story of how they got badly injured is understandable. You are repelled by these things associated with immense physical pain.

You don’t want these things for yourself. This last sentence is especially important because the whole phenomenon of cringing revolves around it.

Cringing at the behavior of other people

What explains cringing at behaviors that other people do? The answer is the same as above: we don’t want such behaviors for ourselves.

Think about the behaviors that make us cringe. They all revolve around someone doing something embarrassing. For example, mistreating people, being judgmental, ignorant, stupid, arrogant, bragging, and even making weird faces while singing can count.

Since people generally view all these behaviors as socially undesirable, they cringe when they see others doing them.

Therefore, cringing is a sort of vicarious or second-hand embarrassment that we experience when we see other people engaging in socially undesirable behaviors. It likely evolved to motivate us to avoid such behavior and discourage others from encouraging in such behavior to ease social interactions.

But why should we feel embarrassed for others?

When we observe other human beings, there’s always some degree of identification going on. We identify with them and, therefore, think of their experiences as our own. They may be oblivious to their faux pas, but we can’t help but cringe and attempt to disassociate with them (avoidance body language).

They’re engaging in public behaviors that we believe are so inappropriate that we can never think of doing them.

While there are behaviors that almost all people find cringe-worthy, there are also differences between people in what they do and don’t find cringe-worthy. It all comes down to the personal beliefs that they have. To some, making weird faces during singing may be cringe-worthy while others might call it art.

We generally empathize and identify with people close to us more. The more we identify and empathize with people, the more likely it is that their inappropriate social behavior will make us cringe. Indeed, a study showed that there’s greater cringing in interactions involving people close to each other.1

Neurological studies have found the neural correlates of social pain experienced during cringing and they point out that these same brain regions are implicated in empathy.2

Interestingly, the same brain areas react when we see someone in physical pain and when we see them embarrass themselves. So if you’re the kind of person who can’t bear to watch a surgery getting performed, it’s highly likely that you easily cringe and get embarrassed by the social blunders of people.