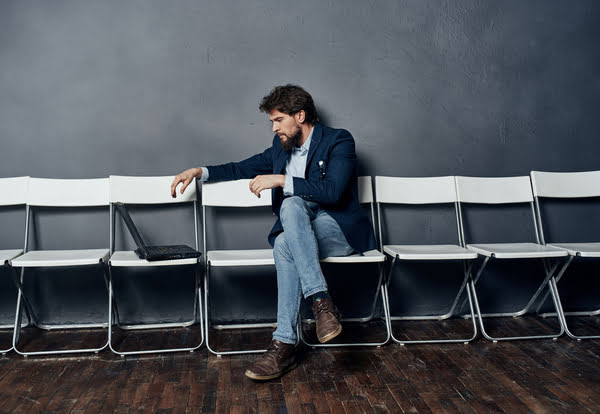 Our brains are wired to protect our vital organs when we sense danger. This improved the chances of survival for our ancestors. The brain uses the same mechanisms to protect us from other kinds of dangers like social danger.

So, when you feel uncomfortable and nervous in a public setting (social danger), your brain rushes to protect your vital organs by making you cross your arms and legs.

Crossing the legs is thus a primitive defensive technique.

People usually cross their legs when they feel uncomfortable and insecure. It’s a ‘closed’ body language gesture that closes you off from other people.

It rarely happens in body language that the same gesture has two opposite meanings. This is definitely the case with crossed legs.

Crossing the legs can also mean that a person feels secure and comfortable. We use our legs to move towards or avoid something. When you cross your legs, you’re signaling:

Why would a person be unwilling to move from a spot?

There are plenty of reasons.

They may feel comfortable and secure where they are.

They may be engaged in a long conversation and know they’re not going anywhere for a while.

They may be disinterested in the person they’re talking to (unwilling to approach).

You’ll often see people sitting or standing with crossed legs while waiting for something, like a doctor’s appointment.

Defensiveness vs. Locked in

If crossed legs can signal discomfort as well as comfort, how do you differentiate between the two?

The answer is: You look at the context and accompanying gestures.

I’ll give you two scenarios where the same man crosses his legs, but the gesture has a different meaning in each scenario.

Imagine you’re taking a walk with your brother. You meet an old friend. While greeting and talking to your old buddy, you notice your brother has his legs crossed.

Scenario 1: Your brother is feeling uncomfortable

If this is the case, your brother will probably have his arms crossed too. He’ll be looking away from you two. He’s probably not big on meeting new people. Maybe he has social anxiety.

His ‘random’ looking at the street and other people isn’t random at all. He’s trying to make it look random because the idea of engaging with a stranger is uncomfortable for him.

Scenario 2: Your brother is feeling comfortable

If your brother feels comfortable in this situation, he’ll show a willingness to engage through smiling and eye contact. It’s like he wants to engage but is only stopped by the fact that he doesn’t know your friend.

If he looks at the street and other people, he’s not actively avoiding eye contact. It’s truly random. A good percentage of his gaze falls back on you two to check if you’re done.

Men who cross their legs

Some people think it’s weird for men to cross their legs.

I see where that is coming from.

Women typically cross their legs when sitting and conversing with people in front of the camera. They do it for a couple of reasons.

First, sitting cross-legged exposes the shape of their legs and makes them look attractive.

Femininity is associated with smallness and weakness.

When men who’re trying to appear more masculine spread their legs, they’re taking up more space to give the impression that they’re bigger than they really are. Larger things take up a larger space.

Similarly, when women cross their legs when seated, they’re attempting to make themselves smaller and more feminine. This adds to their attractiveness.

For this reason, you may feel weird when you see men crossing their legs.

Usually, men who’re comfortable with their feminine side assume this gesture. You’ll see their comfort with femininity leaking out in other ways, like how expressive they are and how they talk about their feelings.

Of course, being in touch with your feminine side is not a bad thing. It can make a man appear more secure, classy, and sophisticated. But you don’t want to overdo it as a man, and you need to be mindful of the context of the situation.

If a situation requires you to appear powerful, you can’t be crossing your legs.

For example, if you’re a CEO and sit with your legs crossed during a meeting, you might rub people the wrong way. People want more masculine than feminine leaders.

If you’re chilling with your girlfriend, you have no pressure to appear powerful. You can sit with your legs crossed in such a casual situation.

“Who cares? Let’s just sit how we want.”

Some people mistakenly think that body language is not a big deal. As you’ve seen, a simple body language gesture like crossing legs can have different meanings in different contexts. If you care about impression management, you must pay attention to body language.

If you think it’s okay for men to sit cross-legged and that it doesn’t reduce their power or masculinity, consider this:

How come you rarely see powerful men like wrestlers, soldiers, and even fictional characters with their legs crossed?

Now that’s one awkward Superman! I used this extreme example to prove a point. You can’t help but feel that this Superman is less powerful than the Superman you’re used to seeing. You can’t count on him to be a savior.