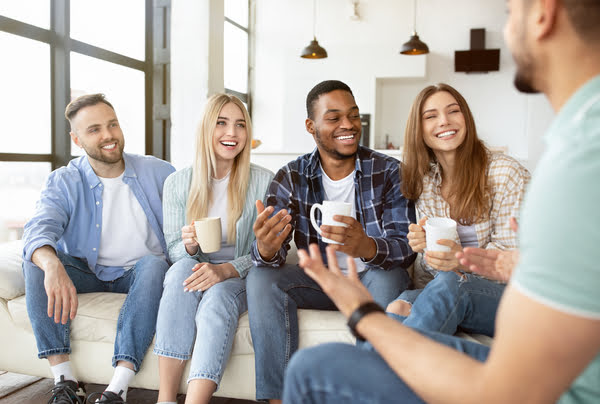 A person with a bubbly personality bubbles with enthusiasm, energy, joy, and laughter. They’re lively, animated, and effervescent. Their warm and shiny personality draws people to them like bees to nectar.

Bubbly people are usually extroverts, but introverts can become bubbly too when they’re with the right people.

In this article, however, we focus our attention on people who seem so happy and positive all the time that they become known for it. Everyone they come into contact with agrees they have a bubbly personality.

The surest sign that you have a bubbly personality is that you’ve been called ‘bubbly’ by other people. Other signs include:

If you’re very friendly with almost everyone, you likely have a bubbly personality. Bubbly people like making friends and getting along with others. This is their main trait.

2. Your body language is bubbly

The body language signs of bubbliness include:

a) Always smiling and giggling

If people who know you are asked to recall you, they’d picture you smiling because that’s how you are most of the time. Bubbly people have infectious laughter that others love to hear.

b) Being expressive and animated

Bubbly people don’t hold back their expressiveness. Their facial expressions and gestures are animated and reveal how happy they feel. They tend to be good communicators. Their open body language makes them easy to talk to.

3. You get easily excited

Bubbly people get excited about the things that most non-bubbly people find trivial. They’ll notice the beautiful clouds, the cute puppy, and the wind caressing their face.

Bubbly personalities like laughing and making others laugh. Laughter is an excellent measure of the health of a relationship.

Bubbly personalities are excited about life. They’re spontaneous and full of energy. They dive into every project they find exciting.

6. You have a strong social network

Since bubbly people get along well with others, they attract many people into their social network. They tend to have a large social circle.

They love attention from others because it enables them to project their bubbliness and win the hearts of people.

8. You’re responsive to others

A bubbly person responds well to others. This is a crucial ingredient of their magic sauce that makes them easy to talk to and why they’re socially competent. Being responsive to others primarily means being a good listener and validating others.

Bubbly personalities talk all the time. They’ll be the first ones to speak, and they’ll often have the lion’s share of talking. Since they’re good communicators, they express themselves eloquently.

Bubbly people are always bubbling with optimism. This is by far their most salient trait. They’ll see the good in everyone and everything. They’ll easily forgive others and forget their mistakes. They don’t hold any grudges.

They maintain an upbeat mood most of the time. They like listening to happy music, looking at funny memes and clips, and watching comedies. They don’t get upset easily but when they do, they can quickly bounce back.

They’re charismatic and have a magnetic personalities. They’re able to draw people to them with their magnetism and a positive outlook of the future. They infuse people with hope and inspiration.

Pros and cons of having a bubbly personality

The pros of having a bubbly personality are obvious. Emotions are contagious and bubbly people lift the spirits of everyone around them.

They’re seen as confident, optimistic, charismatic, and socially competent. They add value to the lives of people they interact with.

However, the cons of having a bubbly personality are rarely discussed. So, we’re going to pay more attention to them.

The cons of having a bubbly personality include:

Some bubbly personality traits like getting easily excited are also observed in children. This can lead people to think of bubbly people as immature.

While most people may enjoy the company of bubbly personalities, they will not entrust them with anything serious. Bubbly people risk creating the perception that they take everything lightly.

People think seriousness and a slight bad mood go hand in hand. What comes to mind when you hear the term ‘serious scientist’?

You probably envisioned a scientist experiencing the pain of hard work and dedication, not someone happy and excited.

Also, would you trust a bubbly expert over a serious expert?

This is closely related to the previous cons. Since adults tend to be smarter than children and bubbly people are akin to children, their intelligence level must also be like that of children.

Also, since seriousness seems to go hand-in-hand with intelligence (‘serious scientist’), non-serious people must be unintelligent.

Note that we’re only talking here about how people think. They may or may not be correct. A person’s bubbliness likely has nothing to do with their intelligence, seriousness, or maturity.

Other situations demand that bubbly people tone down their bubbliness. For instance, no one appreciates bubbliness at a funeral.

Also, when someone is going through a rough phase in their life, hanging with bubbly people could actually make them feel worse.

This happens a lot to women. They’ll be friendly and bubbly, trying to get along with everyone. Some mistake this niceness as a sign of romantic interest.

They risk being seen as inauthentic by people who’re more realistic. After all, no one can be happy all the time. Since bubbly people are, people are likely to think they’re putting on an act. Especially when their bubbliness is out of place.

While bubbly people may attract many people into their lives, these relationships can be superficial. Deep connections are built when people share their positives and negatives, ups and downs, not when they’re happy all the time.

9. Not planning and reflecting

Since bubbly personalities are spontaneous and full of energy, they get excited and dive into projects without putting on their thinking hats. They’re unlikely to take the time to plan and reflect.

10. Being a people pleaser

Bubbly personalities risk sacrificing their own needs to please others. They may feel like they need to get everyone on board before making important decisions. They may end up putting everyone else’s happiness before their own.

The dark side of a bubbly personality

Are bubbly personalities genuinely like that, or are they putting on an act to get people to like them?

For others, the environment plays a key role.

For instance, a person who has seen a lot of pain in their lives may become bubbly to heal themselves.

Then there are those who’re putting on an act.

Anything that you like or want can be used to manipulate you. Since people like bubbliness, bubbly people can use their bubbliness to control them.

On the other hand, genuinely bubbly people are like that most of the time.

People with charisma and bubbliness have incredible powers to influence people and get people on their side. These are the people who can mobilize the masses and become revolutionaries, for better or for worse.