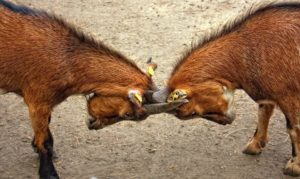 These are some of the important questions that conflict management theory seeks to answer. To understand conflict management, you have to start with the obvious fact that humans are always trying to meet their needs and reach their goals.

So conflict arises when there is a clash of interests between the two parties, be it two colleagues, employer and an employee, husband and wife, and two groups of people like two neighboring countries.

So how do the two parties that are in conflict go about resolving the conflict?

It depends on how much power the two parties wield in a given situation. Generally speaking, parties that are mutually dependent with nearly equal levels of power more often engage in conflict than parties having a large power gap between them.

If you know that the other person is much more powerful than you, there’s no point in engaging in a conflict with them. It’s too risky. They’ll most likely exert their power on you and crush you.

This is the reason conflicts are more common between colleagues who are at the same level in an organization, between husband and wife, between siblings, and between friends.

Since both parties wield nearly equal levels of power, there can be a continuous power struggle where one party tries to become more powerful than the other. The more powerful you are the more you’re able to meet your interests.

Since the other party also wields nearly the same power, they can easily fight back and become more powerful too. The result is often a constant power struggle leading to never-ending conflicts.

Then there are conflicts that occur between parties where there exists a large power gap. Think employer and employee, parents, and children. In these dominant/submissive conflicts, the dominant party is often easily able to impose their will on the submissive party.

The submissive party, in order to win, will have to take drastic measures that significantly increase their power to reach the same level of power as the dominant party.

Children do this by crying, throwing tantrums, emotionally blackmailing their parents, or refusing to eat. All these things significantly decrease the power gap and the children are able to have their say.

Weaker countries may collaborate and gang up on an aggressor because collaboration gives them more power and reduces the power gap between them and the aggressor.

The same dynamics operated when people revolted to topple kings and despots. Together, they had equal or slightly more power than the despots than what they could ever hope to have individually.

If violence is too costly, the parties may cut ties with each other completely. Think upset spouse or friend who won’t talk to you and countries that cut trading ties with their rivals.

In this way, conflicts, particularly dominant/submissive conflicts, are likely to lead drastic win-lose (one wins other loses) or lose-lose (both lose) consequences.

In situations where the two parties are equally powerful and mutually dependent, the ideal conflict management strategy is to arrive at a win-win (both win) resolution.

This conflict management strategy is also known as problem-solving. Organizational theorists have devised several models to explain how parties approach and seek to resolve conflicts in the workplace.

Some of them are applicable to relationships too. One such useful model was given by Thomas1 and Pruitt2 who identified conflict management strategies based on the traits of assertiveness and cooperativeness.

Assertiveness is communicating your interests and needs to the other party while cooperativeness is the willingness to take into consideration their needs and interests.

According to the model, people approach conflict in one of the following ways:

The ideal way to resolve a conflict is to be willing to take the interests of the other party into consideration while making sure your own interests are also being taken care of. This makes it easier to arrive at a win-win resolution.

Studies show that attempting to satisfy all the parties involved has a positive impact on how people feel about the way conflicts are handled, regardless of the outcome.3

An important thing to consider when trying to resolve conflicts using a win-win approach is that it’s not always easy to satisfy both parties. Often, compromises need to be made by both.

Typically, both parties should make equal compromises if the win-win approach is going to work. No party should feel that they had to compromise more than the other as this would again create a sense of power imbalance and injustice.

If it’s impossible to arrive at an equal compromise, then the party that sacrificed more should be compensated somehow, like providing or promising them some kind of benefits.

Sometimes conflict arises not because there is an actual problem but because one or both parties believe there is. They may have misperceived the actions or intentions of the other party. In these situations, conflicts can be easily resolved by clearing the misconceptions arising out of misperceptions.

People, out of fear, tend to hold on to their misperceptions. Hence, they need to be given solid proof to calm their fears.

How to resolve conflicts

While conflicts may occur in all kinds of relationships, not all conflicts are worth getting into. Conflicts can be costly and it’s important to learn to choose one’s conflicts, whenever possible. This might sound like I’m trying to say we have a choice when it comes to conflicts. I am. We do. Sometimes.

In such cases, as Sun Tzu pointed out in his book The Art of War, the ideal strategy is to ‘subdue the enemy without fighting’. Try to figure out how best you can protect your interests without getting into a conflict.

Note that sometimes people might get into a conflict with you because they have something to gain from the conflict itself. It’s in their best interest to fight.

Take the example of a woman who wants to end a relationship but doesn’t do it straightforwardly. She gets upset about petty things and gets into fights so that she has a legitimate and polite reason to end the relationship- the fights.

I was once caught in a similar ‘unreasonable conflict’ when I was doing an internship with a company. I was in the last couple of weeks into my compulsory internship for my master’s degree. While many of my classmates acquired internships via their connections, it had taken me a while to land an internship. I was not from the city and didn’t have many connections.

One morning, I find my boss yelling at me because I’d made some kind of mistake. His yelling was not in proportion to the mistake I’d made. Of course, it upset me and I felt like storming out of the place right away. But then I remembered something.

He hadn’t been like this during the initial day but, lately, he’d been frequently yelling at the interns. Some of those interns had left the organization. Since this was a paid internship, the interns were going to get paid when the internship period was over.

I figured he was finding an excuse to fire the interns, making them leave. This way he could save a lot of money and those interns who left had already worked for him.

I just kept quiet and didn’t say anything in my defense as that would’ve escalated the conflict. Instead, I admitted my mistake. To be clear, it wasn’t just my mistake but the mistake of all my team members. He singled me out and one fellow teammate for some reason.

So this unreasonable conflict most likely had the goal of firing me and not punishing me for the mistake I had a small part in. I listened to the yelling, stayed in the organization for a couple of weeks, took my money and completed my internship.

Had I given in to my emotions and left, I would’ve probably been in a worse situation, struggling to find an internship. His firing strategy failed on me.

As a rule of thumb, whenever people trigger an emotion in you ask yourself how they might be trying to manipulate you.

Conflict management books are laden with jargon, matrices, and authors chasing their own tails trying to come up with models.

At the end of the day, conflict management is all about understanding the person you’re in conflict with- knowing your enemy. The more you understand people the less you’ll find yourself engaging in conflict with them. You’ll know what their interests are and you’ll try to protect them, all the while trying to protect your own.