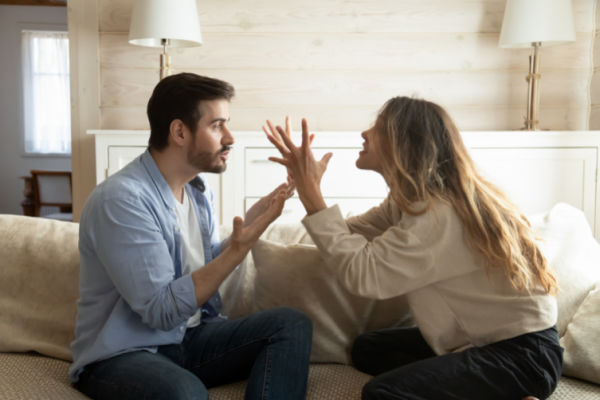 We can broadly classify people into three types based on how they approach conflicts:

These are people who try to avoid all conflicts. This is generally a poor strategy and shows weakness.

People who only pick conflicts that are worth picking. They understand some battles are worth fighting and some aren’t.

A high conflict personality seeks conflict all the time. They have a habit of getting into unnecessary conflicts. They pick fights with most people most of the time and seem more interested in escalating conflicts than reducing or resolving them.

High conflict personalities can be difficult to deal with. Note that they may or may not have a valid reason for getting into conflicts. But that’s not the issue here. The issue here is that they have a tendency to get into arguments and fights. They’re seen by others as quarrelsome.

Mostly, their reactions to conflicts are disproportionately confrontational.

Knowing the signs of a high conflict personality will allow you to identify these people in your life. Once you’ve identified them, you can handle them better and not get sucked into their little game.

Additionally, keeping these signs in mind will help you screen the new people you meet. It’s much better to not get involved with a high conflict person in the first place than to deal with the problems they cause later on.

Following are the major symptoms of a high conflict personality:

1. Getting into conflicts more than the average person

This is a no-brainer. It’s the very definition of a high conflict personality. I’m sure you can think of people in your life who’re more conflict-prone than others. They’re often the ones who start and escalate conflicts.

For instance, every time there’s a conflict in your family, you may have noticed that it’s always between this one person and someone else.

Say there are four members- A, B, C, and D in your family. If A fights more with B, C, and D than B, C, and D fight with each other, you can be sure that A is a high conflict personality.

High conflict personalities usually start a conflict by blaming others. More often than not, the blaming is unwarranted. Even if their complaint is legitimate, they ruin their chances of healthy interaction and resolution by blaming others.

Blaming is attacking the other person. Nothing more, nothing less. Those who get blamed defend themselves or blame back. The conflict escalates and we hear all the yelling.

High conflict people not only blame when the blame is warranted, but they also blame when it’s unwarranted. Worse, they may even blame others for their own mistakes! At the same time, they don’t like to accept responsibility for their own faults.

Having a victim mentality helps high conflict people give themselves valid excuses for being quarrelsome. It’s always the other person’s fault. They’re the victims. They don’t see how they might have contributed to the issue.

High conflict personalities are masters of ‘all-or-nothing’ thinking, also called ‘black and white’ thinking. They see the world in terms of absolute opposites and extremes. There’s no in-between, no grey areas.

“I’m going to see a friend from college today.”

“Why don’t you sleep with her as well?”

Conflicts happen in relationships, but they don’t have to. Most can be avoided or resolved quickly. When you go into a relationship with the mentality that conflict is normal and inevitable, you may start to look for conflicts.

To a high conflict personality, a dry spell with no conflict feels abnormal. They believe they have to keep fighting to make the relationship feel normal.

Neutral personalities dislike conflict and pick their battles carefully. Once they pick them, they seek to end them as soon as possible. They bounce back from a conflict quickly and make plans to avoid it in the future. They don’t believe that dragging on conflicts forever is normal.

It’s more about how a high-conflict person says something than what they actually say. As mentioned earlier, they may have a valid complaint, but they ruin it by being impolite and attacking.

They have a dominating, controlling, and commanding tone that others naturally resist, leading to conflict.

Also, high conflict people have trouble seeing things from the other person’s perspective. They’re prone to fundamental attribution error (blaming people vs situations) and actor-observer bias (seeing things only from one’s own perspective).

Once, a high-conflict person I know was super busy with some stuff. She got a call from a coworker. She cut the call immediately and was visibly irritated. She said:

“These idiots always disturb you when you’re busy. They don’t think about you at all-that you might be busy with something.”

“But… how can they possibly know you’re busy right now? You didn’t tell them.”

Of course, she was too emotional to consider my point. She went on with her rant for a while before my point finally sank in.

High conflict personalities are easily triggered and angered. They seem to have little control over their emotions. They sometimes have public outbursts of anger, embarrassing their companions and catching others by surprise.

They’re usually the ones who first get physical in an argument and throw things around.

What causes a high conflict personality?

What makes high conflict people who they are? What are their underlying motives?

High conflict personalities may be shaped by one or more of the following forces:

Some people are naturally more aggressive than others. This has to do with their high baseline levels of testosterone. They like dominating people and pushing them around to have their own way.

Attacking people and forcing them to defend gives you a sense of power and superiority over them. It’s these pleasant feelings of superiority that could be the driving force behind someone’s high conflict behavior.

Humans like drama and thrills. They make life spicy and exciting. Women are especially into drama and interpersonal conflicts. I got the shock of my life recently when I asked a woman why she got into petty conflicts with her husband. She admitted she found it fun. It slipped out of her.

Of course, women won’t directly admit it, but the huge number of women who enjoy dramas and soap operas should clue you in.

I suspect just as men watch sports to ‘hone’ their hunting skills, women watch drama to hone their interpersonal skills.

In a relationship, the person who’s insecure may try to keep the other person under their thumb with constant fights and threats. The goal is to control the partner’s behavior through fear. They’re also likely to have an insecure attachment style.

Some people present a persona of being quarrelsome to cover up something they don’t want others to see. After all, if people see you as quarrelsome, they won’t mess with you. They won’t dare open that closet of skeletons behind you.

For example, in a workplace, people who’re incompetent tend to be the most quarrelsome. It’s their strategy to hide how incompetent they are.

Some people have a lot of anger inside them. They may be angry at themselves, others, the world, or all of these. Starting conflicts with people becomes their go-to strategy to discharge their anger. They’re like:

“If I’m feeling terrible, you should too.”

You may have noticed that you become more irritable when you’re angry. You get mad at people for nothing, discharging your anger. For high conflict people, it’s a regular thing.

It’s likely that high conflict people have gone through some kind of trauma in their early childhood. This trauma lowered their threshold for threat perception. As a result, they see threats where there are none- or where there are minimal, inconsequential threats.

This constant feeling of danger makes them defensive. The defensiveness makes them blame people and attack them pre-emptively.

Dealing with a high conflict personality

Unless you like being pulled into arguments and fights, learning how to deal with high-conflict personalities is critical. Following are some of the effective strategies:

When you get blamed, you’re attacked, and it’s tempting to attack back. This creates a vicious cycle and before you know it, you’re pulled into the escalation.

Remembering to deal with the situation assertively, not aggressively, is key. Tell them politely that you don’t like it when they blame you. Ask them questions in a non-defensive tone, such as:

“Why are you doing this?”

Be mindful of your tone and body language. Ideally, nothing in them should communicate aggression or defensiveness. This should be enough to force them to put the brakes on their attack and self-reflect.

When you know they’re a hopeless case and can never self-reflect, the best strategy is disengagement. You simply ignore them and don’t engage them at all. Listen to what they have to say, smile, and carry on doing what you were doing.

No attacking back and no defending.

Think of them as trying to bait you with their attack. If you bite, you’ll be in their trap before you know it.

Remember that high conflict people are perceiving more fear than there is fear to be afraid of. If you can figure out what they’re so afraid of, you can calm their fears and their willingness to fight will go away.

Sometimes these fears are obvious, and sometimes they’re not. You’ll have to do some figuring out in the latter case.

For example, telling your wife that the college friend you’re meeting is engaged can calm her fears of you cheating on her.

Sometimes you have to think of clever ways to calm their fears. Other times, it’s really very simple. All you have to do is acknowledge their fear and let them know you’re going to make sure it won’t happen.

Note how this strategy differs from trying to convince them that their fear is irrational or exaggerated. That’s not going to work in most cases.

The closer you are to a high conflict person, the more likely it is that they’ll make you their target of blame. If you’re already in a relationship with a high-conflict person, distancing yourself is a good idea. You don’t have to completely break off the relationship.

Bill Eddy, the author of 5 Types of people who can ruin your life, recommends using BIFF responses to handle attacks from high-conflict people:

High conflict people have a habit of latching on to something you say and turning it into a conflict. The solution: Don’t give them much to latch on to. Keeping your responses brief can prevent escalation.

Say something friendly to take the edge off of their attack. For example:

“Thank you for your opinion.”

It’s tempting to say it in a sarcastic tone but don’t- unless you don’t care about your relationship with them. Sarcasm may escalate the conflict and make them harbor resentment for you.

When you ward off their attacks, high conflict people may try to reel you in harder. They may intensify their attack, keep attacking you, or demand more information. Your response has to be brief and firm. Avoid revealing more for them to latch on to.