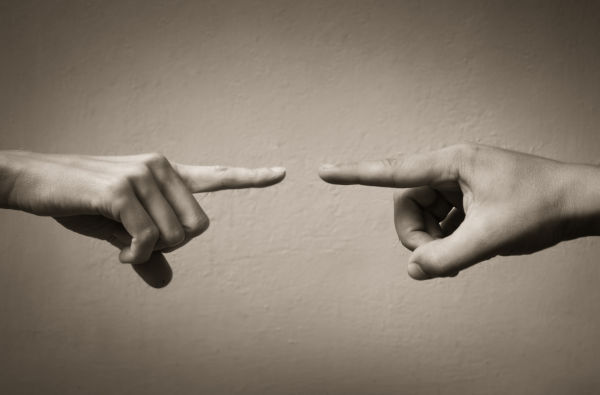 “Most misunderstandings in the world could be avoided if people would simply take the time to ask, ‘What else could this mean?’”

We’re prone to making errors in attributing causation to behavior based on whether we’re an actor (a doer of behavior) or an observer (of an actor).

When you’re driving, you cut someone off (actor) and blame it on the fact that you’re in a hurry and need to get to the office on time (external cause).

When you see someone else cutting you off (observer), you assume they’re a rude and inconsiderate person (internal cause), paying no heed to their situational factors. They might be in a hurry, too.

When you drop a glass of water (actor), you say it’s because the glass was slippery (external cause). When you see a family member do the same, you say they’re clumsy (internal cause).

When you reply late to a text (actor), you explain you were busy (external cause). When your spouse replies late (observer), you believe they did it intentionally (internal cause).

Why does this bias occur?

The actor-observer bias is the consequence of how our attention and perception systems work.

When we’re an actor, we focus our attention on our surroundings. We can ‘see’ how we behave or respond to changing circumstances. Therefore, in this condition, it’s easy to attribute situational causes to our behavior.

Since attention is a limited resource, it’s cognitively effortful to turn our attention inward and introspect. Introspection doesn’t come so naturally to us as does paying attention to our surroundings.

Hence, we’re likely to miss internal factors that may drive our behaviors.

When we’re an observer of an actor, they become ‘part’ of our surroundings. We’re likely to attribute their behavior to their personality because we can’t peek into their minds. We can’t see things from their vantage point. Their surroundings are not our surroundings.

If introspection is a leap, seeing things from another’s perspective is a bigger leap. Our attentional resources are too scarce for us to be making these leaps. Instead, we just focus on our surroundings most of the time.

Another reason for the bias is that as observers, we don’t have access to the actor’s memory of their own behaviors. An actor has access to an extensive database of their own autobiographical memory. They know they behave differently in different situations.

The observer, having no such access, is quick to attribute a one-off behavior to personality because they don’t know how the actor responds to different situations.

This is why we have a tendency to see our own personality as more variable than that of others (trait ascription bias).

Similarly, if someone asks you if you have a short temper, you’re likely to say, “It depends on the situation”. At the same time, you might quickly label someone short-tempered based on one or two instances.

The more we get to know someone, the more access we have to their motivations, memories, desires, and situations. Studies show that people succumb to this bias less frequently with close friends and family members.1

The actor-observer bias is likely to occur when the behavior or outcome is negative.2

In fact, when behavior or outcome is positive, people tend to attribute it to themselves (self-serving bias). When the outcome is negative, they tend to blame others or their surroundings.

This is a defense mechanism designed to maintain a high level of self-esteem. No one likes to look bad, and it leads people to make errors in attribution.

Say you failed a test. Instead of blaming yourself for not preparing, it’s easier to blame your friends who didn’t let you study or the teacher who designed a tough exam.

Evolutionary roots of the bias

First off, our attentional system, like that of other animals, primarily evolved to focus on our surroundings. This is because almost all the threats and opportunities are present in our environment. So, we needed to be good at paying attention to our surroundings.

As humans became social and lived in groups, advanced faculties, such as introspection and perspective-taking, emerged. Since these are relatively newer faculties, it takes more conscious effort to engage them.

Second, in our ancestral environments, survival and reproductive success largely depended on close relationships and alliances. We needed to quickly classify people as friends or foes. A mistake made in identifying an enemy as a friend would’ve proven too costly.

In modern times, we’ve retained this tendency to quickly classify people as friends or foes. We do this based on minimal information. While this may improve our ability to judge people quickly, the cost of this ability is more false positives.

In other words, we make judgments about people based on minimal information. This leads us to make attribution errors.

We make character judgments based on one-off events to easily get an idea of how they’re likely to behave in the future (since character tends to remain stable).

Actor-observer bias at the group level

Interestingly, this bias also occurs at the group level. Since a group is the extension of the individual, it often behaves like an individual.

We’re likely to take into account situational factors behind our group’s behavior and discount these factors in outgroups. We give more importance to internal factors when observing the behavior of outgroups:

“They’re our enemies. They hate us.”

History is littered with examples of rulers who exploited this bias of people to stoke hatred for a group of people. Politicians do it all the time because they know people will jump at labeling outgroups as enemies.

Not surprisingly, studies show that when people are under the grip of emotions like fear and anger, they’re prone to commit the ultimate attribution error.3

Hence, we’re more likely to apply actor-observer bias to those at a distance than those in proximity.4

In favoring, situational factors are emphasized and in blaming, personal factors. If you live in a muilti-cultural country, you probaby see this in the news all the time.

Since you’re reading this, you have an advantage over most people who’ll never take the time to understand this bias. You’ll fall into the trap of this bias less often. Pat your conscious mind on the back.

Remember that our personal attributions of others tend to be quick, unconscious, and automatic. You need to be on your toes to question these attributions.

The most important ability that can counteract this bias is perspective-taking. Forcing yourself to take the perspective of others into consideration is a skill one must practice often.

Although this bias is less common in close relationships, it’s there. And when it’s there, it has the potential to ruin relationships. Arguments are often nothing more than a cycle of blaming one another with little introspection.

Perspective-taking allows you to get inside someone’s head so you can give more weight to their situational factors. Your goal should be to slow down the process of making personal attributions as much as possible.

I always try to give people the benefit of doubt for one-off events. I’ll only label them an enemy when they harm me repeatedly. Repeated behaviors are more likely to reflect one’s personality and intentionality than one-off behaviors.

Before labeling someone rude and inconsiderate, ask yourself: