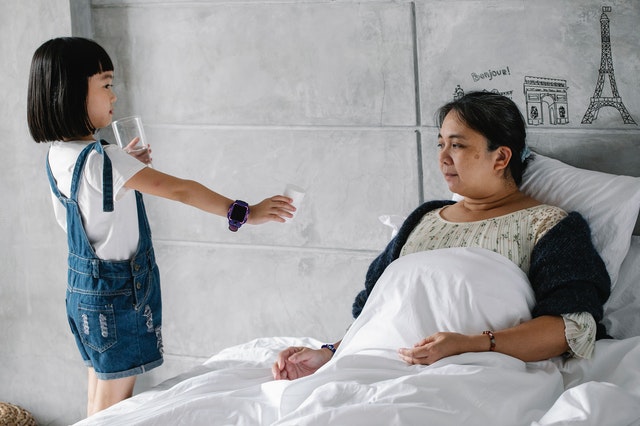 Although enmeshment can be observed in all kinds of relationships, it’s common in parent-child relationships. For example, a son going through a breakup experiences depression. His mother also feels depressed. Because she’s enmeshed with her son, she feels it’s her responsibility to rescue him from his negative emotions.

There’s a subtle but important difference between providing healthy support to your child and fighting life’s battles for your child. The former is an example of a healthy, cohesive family, and the latter, of enmeshment.

Over-interference, constant criticism, helicopter parenting, possessiveness, rescuing, treating as a child, and discouraging autonomy are all signs of an enmeshed family pattern.

Human children highly depend on their parents for survival. As a result, they cling to their parents. When they grow up, they start to form their own separate identity. They start to become a separate, autonomous person.

By the time a person reaches their mid-twenties, they’re likely to have developed a separate identity for themselves- the core of who they are is established.

All this is natural and expected as a person passes through the different stages of development. If this process goes undisturbed, the child is likely to develop a strong sense of self.

Of course, during these times, it’s healthy and natural for the family members to overly care for one another. But a consequence of such forced closeness can be enmeshment in case the family members keep clinging to these patterns afterward.

Other than this, there may be some character trait in a family member that makes them heavily dependent on another family member, such as being a needy person. Also, the parents themselves may have grown up in enmeshed families, so they just don’t know how else to parent.

Parents who didn’t get their own needs met when they were children may enlist their children to take care of them.1

Types of enmeshment in a parent-child relationship

Enmeshment occurs when the boundaries among family members dissolve. In the course of natural and healthy development, a child eventually forms his or her own identity. There are certain roles and boundaries associated with this identity that reinforce the identity.

Since there’s identity confusion in enmeshed families, there’s also role confusion or role corruption. The enmeshed family member expects the child to play a different role than what is developmentally expected of them.

In parentification, the child is turned into a parent by the enmeshed parent. In this role reversal, the child becomes the primary caregiver of the parent. The latter may have gone through a divorce, a debilitating illness, or some other life-changing event, or they may have an unmet need to be cared for.

While it’s healthy to care for a parent undergoing a terrible phase, the relationship turns unhealthy when the parent seeks to maintain the forced closeness longer than necessary. At that point, the parent may have gotten enmeshed with the child.

The child feels that the enmeshed parent’s needs are being imposed on them. As a result, the child may end up resenting the parent. Since the parent demands unreasonable levels of care and support, a sizeable chunk of the child’s time is spent catering to the parent’s needs.

This carries the risk of impairing the child’s education and peer interactions. The child may struggle to make friends and form relationships later on in life. The parentified children miss out on developing an identity for themselves. Their main imposed identity is to be the carer of the enmeshed parent.

Here, the child is turned into an adult. The adultifying parent sees their child as a partner, friend, or ally. The parent may have had a falling out with their spouse and is now trying to win the sympathy and support of the child.

The child may feel helpless because they don’t know how to deal with the parent. The parent may share inappropriate personal information with the child.

While it sounds healthy for a parent to be their child’s friend, there are some limits and boundaries that should still be maintained so that the child isn’t adultified.

Perhaps the most prevalent form of role corruption is infantilization, where the enmeshed parent still sees their grown son or daughter as a child. The parent still shows care and support for the child that is age-inappropriate.

The son or daughter has grown up and probably developed a separate sense of self, but the parent still sees them as they did years ago. The infantilizing parent may strongly need to be needed. They may feel threatened by their child trying to become independent.3

The infantilizing parent wants to keep the child close to them. They may home-school their child, discourage them from making friends, and prevent them from making their own, age-appropriate decisions.

As a result, infantilized children may suffer from anxiety, depression, and various developmental delays. They experience frustration when the parent sometimes shows care, blurting out sentences such as, “Don’t tell me what to do. I’m not a child anymore”.

It almost seems as if the parent isn’t done parenting. The child experiences frustration because they’re being pulled back to an identity they thought they left long ago- a skin they shed long ago.

There have been extreme cases where parents faked the illness of their child, just so they could keep their children close to them and not let them attend school or other outings.

The longer a person stays in an enmeshed relationship, the longer it’ll take them to forge a sense of self. Our self-identity affects our entire life. We make our most important life decisions based on who we think we are.

When there’s no boundary between a person and their family member, most of their existence and life decisions serve the needs of the family member.

There are always trade-offs with our decisions. A person embroiled in an enmeshed relationship gives less time and energy to other important life areas.

For example, a parentified child may continue overly serving their parent when they grow up, to the annoyance of their romantic partner.

Since the enmeshed person doesn’t know who they really are, they may take a long time to choose a career that’s in line with their identity. Worse, they might not be able to choose a vocation based on their identity because they don’t have an identity, to begin with.

Their identity, whatever little of that they might have, was forged by their relationship with their enmeshed family member. When they grow up, they continue to play out this half-baked, unoriginal identity in other relationships.

A child whose father ditches the family often finds that he or she has to take care of younger siblings, effectively becoming a parent to them. This child may grow up and continue to be a parent to their relationship partner.

Not having a sense of self that we build or discover ourselves can have a negative impact on all our life areas. It leads to decisions that are unlikely to be aligned with our actual values.

If the son does become a doctor, the parent feels happy and proud, often to an obnoxiously ostentatious level. This isn’t just the normal happiness and pride that any parent would feel for the success of their child. There’s something else mixed with it that makes it extreme and obnoxious.

The parent is proud of themselves more because they see their child as an extension of themselves. It’s more about self-pride than the pride that comes from the success of your child whom you see as a separate, independent individual.

This is probably why, if a child goes against their parents’ wishes and succeeds, the enthusiasm shown by the enmeshed parent is hardly the same. Here, someone else became successful- a separate individual who isn’t merely an extension of the parent. Someone who is their own person- an individual who has their own goals and values.

On one extreme, parents may be overly and inappropriately involved in their children’s lives, i.e. enmeshed. On another, they may be disengaged with their children. Both are unhealthy family patterns that end up harming the child.

As with so many things in life, the right approach is the middle one. In balanced families, parents love, care for, and support their children, but they also give them psychological space to grow and develop.

Healthy parents let the natural developmental pattern run its course and give children more and more autonomy as they grow up. The child feels free to forge his or her own identity.

Since the parents respect the child’s boundaries and encourage individuality, the child returns the respect. Also, there’s no role confusion of any sort. The expectations that parents have of the child, if any, are age-appropriate.

Even if some unfortunate tragedy causes a reconfiguration of roles, a healthy parent tries to ensure it’s only temporary. They don’t imprison their children in the dungeons of their own needs.

It’s not that autonomous individuals with a strong sense of self necessarily ignore their parents’ needs. It’s just that if they do it, they do it willingly and happily. It doesn’t feel like an imposition to them.

More importantly, they don’t feel they’ve had to sacrifice their own needs to be of need to their loved ones.

Poets were the first psychologists. All that we discussed in this article could be summed up in this beautiful verse:

“Let there be spaces in your togetherness, and let the winds of the heavens dance between you. Love one another but make not a bond of love: Let it rather be a moving sea between the shores of your souls.”