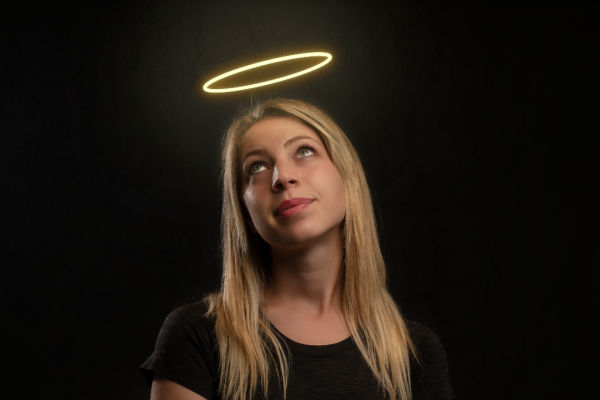 Humility can be defined as being free from pride and arrogance. Society values humility as a personality trait. Hence, people have an incentive to display humility to be seen as valuable by others.

This leads some to display humility when, in fact, they don’t really feel humble.

False humility is displaying humility when you’ve got no reason to be humble or when you don’t really feel humble. Since others value humility, false humility is usually a strategy to gain the benefits of coming across as truly humble.

This brings us to the question: Why do people value humility?

Humility is considered a virtue because pride and arrogance make people feel inferior. People are always comparing themselves to others. When they find others are above them and blatantly displaying their superiority, it makes them look bad.

The flip-side of this is that those who reach a high status in life are tempted to brag about it. Advertising your high status has its own benefits. Hence, successful people want to show how successful they are. But the smart ones among them are aware of the negative effects of bragging.

So many of them take the middle path of false humility. It’s a way to gain the benefits of appearing humble while avoiding offending others with pride.

Humility is not as straightforward a concept as it may seem. Philosophers and other scholars are still debating what it really means.

Here’s what I call the humility paradox:

To be humble, one has to first be great and accomplished. Unaccomplished people have nothing to be humble about. But the moment you know you’re great, you’re no longer humble.

Where does false humility fit into all this?

People only detect false humility where what a person signals is inconsistent with reality.

For example, consider an employee who gets promoted. They’re congratulated by their co-workers.

The reality is that the employee has gained some status and should be happy. How the employee handles compliments will show whether they’re displaying false humility.

If the employee acknowledges the compliments with a smile and a “Thank you”, they’re behaving in accordance with their status gain.

However, if the employee downplays the compliments, saying something like:

“The boss seems to be in a good mood.”

All these phrases can come across as false humility because they go directly against how the employee is supposed to feel and behave.

The fundamental human need to impress

Generally, the more socio-economic status people gain, the more likely they’re to advertise their high status with the goal of impressing others. After all, what’s the point of having success when no one knows about it? You can’t maximize the benefits of success that way.

This wanting to impress others is fundamental to human nature. It’s more important than displaying pride or arrogance. Hence, when socially aware people understand that their ostentatious pride can rub people the wrong way, they avoid engaging in it.

Yet, they want to keep the benefits of displaying their high status so they choose to do so in subtle ways. One such subtle way is showing false humility.

What leads to true humility?

When a person feels their success is transient, they’re more likely to be truly humble. Why?

Again, it’s because they want to impress others. If they’re boastful today but fail tomorrow, they know people are going to look down upon them tomorrow.

So true humility may be nothing more than a fear of not being able to maintain one’s high status, and hence, falling in the eyes of others.

The higher you go, the harder you fall. Those who’re extremely boastful are going to feel worse when they fail. People are going to look down upon them and pity them more.

On the other hand, those who’re modest, even when they’re successful, can avoid these risks if they fail or lose their status.

This is why external success is not a solid basis for self-esteem. One’s self-esteem should be based on one’s inner qualities (such as intelligence, patience, and persistence) that no life tragedy can touch.

In sum, while those who seem truly humble may come across as not caring about status or what others think, the reality might be quite different. Because they deeply care about what others think could be the very reason they’re being so humble. Humility for them is a strategy to avoid the risks of bragging.

1. To avoid offending others

As discussed earlier, false humility is mostly a strategy to avoid offending others. Does it work? Not always.

As in the employee example above, when people compare false humility with reality and notice discrepancies, the displayer of false humility comes across as insincere. People like sincere braggarts more than humblebraggers.1

This is a consequence of the paradox that in order to be humble, you first need to be great. When people can’t show their greatness directly, they resort to indirect measures such as false humility.

False humility manifests in behaviors such as the deflection of attention from, or downplaying of, success or a positive quality.2

For example, when people post their good-looking selfies on social media, they’ll often add a caption that detracts some attention from the picture itself.

Using a caption such as “Look how hot I am” would be too direct, even if that’s what the person really wants to convey. Some socially clueless people do this, but most don’t.

Showing your competitors you’re less competent than you really are is a clever strategy. We’ve all come across that high school nerd who says they didn’t study anything but end up getting the highest marks.

When your competitors know of your competence, they’ll up their game to compete with you. When they have no clue how competitive you are, they’re lulled into a false sense of safety. Heck, if you’re good, they might even think that you’re incompetent.

Some people display false humility to extract favors from others.3

They ‘play helpless’ to get you to do something when, in fact, they’re not really as helpless as they’re portraying themselves to be. This is extremely annoying behavior and people who can detect it end up loathing such manipulators. Ask for help when you really need it.

5. To fish for compliments

We all like to be complimented, but many people aren’t so generous with their compliments. Portraying false humility is one way to extract compliments from people.

For example, a wife who prepares a dish and wants to extract a compliment from her husband might say something like:

“It tastes horrible. I messed it up. I’m such an awful cook.”

Did you see what just happened here? Had she not downplayed herself, chances were the husband would’ve had the dish without bothering to compliment her. By downplaying herself, she increased the chances of getting a compliment.

When is pride good and when is it bad?

The main takeaway from this article is that people want you to be sincere more than they want you to be humble. Whilst showing pride may hurt people because it makes them look bad, they’ll respect you for ‘owning’ your success.

Remember that people are always comparing your signals with reality. If they think your pride is well-earned, they might even like and admire you. If your pride is disproportionate to your reality, you’ll be looked down upon and mocked.

Same applies to humility. Your humility is likely to be interpreted as false if it goes against your current level of success. When people can detect an ulterior motive behind your false humility, they’ll think less of you.

What if you’re ultra-successful but really feel humble? How do you display humility without it coming across as false humility?

I’d say own your success without putting others down. It’s tempting to put others down when you’re successful, to highlight the gap between them and you. Only those who’ve truly mastered their social skills can avoid falling into this trap.