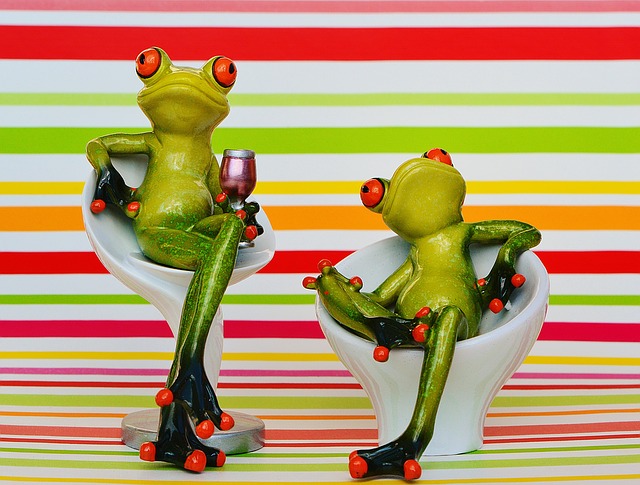 Whilst seated, a person doing the figure four leg lock gesture rests one leg horizontally over the knee of the other leg. The legs are spread out and the person leans back slightly.

If you look at this gesture from the top, the legs appear to be making the shape of the number ‘4’ and hence the name. This gesture is actually a cluster of two gestures, crossing the legs (partially, in this case) and the seated crotch display.

Crossing the legs most of the time indicates a defensive attitude because it enables the person to sort of ‘protect’ the genitals on the subconscious level and spreading out the legs (crotch display) is a gesture that conveys the attitude of dominance and aggression.

Now when are people usually both defensive and aggressive simultaneously?

The answer is… In a war.

This gesture, usually assumed by men, conveys the attitudes of war-like competitiveness, aggression, and dominance. The person is displaying his crotch (dominance) but at the same time forms a partial barrier by placing one leg over the other to symbolically ward off any attack.

Just like soldiers erecting barricades before them when they’re firing at the enemies.

You’ll notice this gesture when a person feels the need to compete and strive for superiority.

For example, in a debate, if a person feels very sure about his arguments, he might do this gesture. As he hears the arguments of his opponents, he might take up this gesture, thinking, “When will they finish? I can’t wait to attack them with my arguments”.

He’s fighting a battle internally with his opponents, preparing to fire non-physical bullets at them in the form of words. No wonder debates are often called ‘war of the words’.

One thing that you should remember about body language is that when you take up a particular gesture consciously, you begin to feel the emotions associated with that gesture. Or, as psychologist William James said and I’m paraphrasing, “Not only do actions follow feelings but feelings also follow actions”.

You can do a little experiment to prove this to yourself. In a social setting if you feel unconfident or anxious, shift immediately to this gesture if you are seated and see what happens.

Other non-verbal messages that this gesture conveys can be phrased as “I’m an expert in this field and I know more than these people” or “Whatever you say, I’m not changing my opinion”. That last one is the very definition of stubbornness and so we might as well say that in some situations this gesture can signal stubbornness.

If you see a client taking up this position when you’re trying to sell them a product or service, chances are high that they’re unimpressed by what you have to offer.

Knowing this, you can try to figure out the reason behind their unimpressed attitude and tackle that.

Once, in a Business Communications class, a teacher asked me to sit in the figure four position in front of the students and asked the students what they thought about my attitude. “Arrogant”, “Confident” and “Insecure” were among the responses.

This gesture is one of those rare body language gestures where two seemingly conflicting attitudes (Confidence and insecurity) can co-exist at the same time.

Figure four and the Nazis

It’s believed that this gesture originated in America and during the World War 2, the Nazis were on the lookout for this gesture because it could mean the person was from the USA or at least, had spent enough time there to learn this gesture.

Imagine being caught by your enemy because of a simple gesture that you did. I mean, what a ridiculous way to die.

Today, due to the spread of TV and other visual mass media, this gesture is noticed across the globe.

The figure four gesture is sometimes accompanied by the leg clamp- the person clamps his leg (near the foot) with one or both hands to bolster this gesture… and his attitude. The person doing this gesture is feeling very competitive, dominant or stubborn and wants to stay that way for a while.

In the above client example, when you try a different approach of selling your product, the person might try to ‘clamp’ his unconvinced and unimpressed attitude. This is a red signal and means you should immediately stop convincing him before he verbalizes his “No”.

At this point, you might want to forget about the product and attempt to understand him better, at a deeper level, by asking more questions until you find out the real reason behind his resistance.