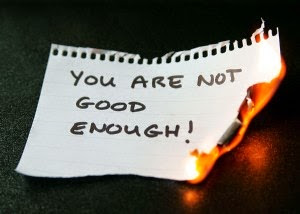 Before we can talk about overcoming inferiority complex, it’s important that we understand how and why the feelings of inferiority arise in the first place. In short, inferiority feelings motivate us to compete with members of our social group.

Feelings of inferiority make a person feel bad because they find themselves in a disadvantaged position with respect to their peers. These bad feelings are signals from the subconscious asking the person to ‘win’ and thus become superior to others.

In our ancestral environments, winning or having a high social status meant access to resources. Therefore, we carry psychological mechanisms that make us do three things:

Inferiority feelings and comparing yourself to others

‘Don’t compare yourself to others’ is one of the most oft-repeated and cliche advice out there. But it’s a fundamental process by which we gauge our social status. It’s a tendency that comes naturally to us and cannot be easily overcome.

Ancestral humans didn’t compete with themselves, but with others. Telling a prehistoric man that ‘he shouldn’t compare himself to others but to himself’ would probably have been a death sentence for him.

That said, social comparison can prove detrimental to a person’s well-being because of the inferiority feelings it generates. In this article, I won’t be talking about how not to compare yourself with others because I don’t think it’s even possible.

Most experts recognize it’s normal to feel inferior from to time. But when the feelings of inferiority are severe and you don’t know what to do with them, they can be paralyzing.

As you saw earlier, feelings of inferiority have a purpose. If people didn’t experience inferiority, they’d be severely disadvantaged in life. They just wouldn’t be able to compete.

Our ancestors who didn’t have the capacity to feel inferior when they were in a disadvantaged position got weeded out by evolution.

Feelings of inferiority are often experienced by a person when they encounter people or situations that lead them to compare themselves to others. People typically feel inferior when they perceive others to be more accomplished, capable, and worthy.

The feelings of inferiority are sent by the subconscious mind of a person to motivate them to improve the areas of life they believe they’re lagging in. Feeling inferior is the opposite of feeling confident. When someone is not confident, they believe they’re unimportant, unworthy, and inadequate.

You can either feel inferior or superior about certain things in life. There’s no in-between state. Having an in-between mental state would be a waste of mental resources because it doesn’t tell you where you belong in the social hierarchy.

The way to overcome inferiority complex arising from these two issues to own a Ferrari and get a partner.

I deliberately chose these examples because really the only two types of insecurities people have are financial and relational insecurity. And it makes good evolutionary sense why.

But note that I italicized ‘If you think’ because it also comes down to what your self-concept is and what your values are.

If you had a rough childhood where people filled your mind with limiting beliefs, your self-concept is likely poor and you might constantly feel inferior or ‘not good enough’.

If your inferiority complex is arising from something like this, cognitive behavior therapy can be very helpful. It’ll enable you to overcome your distorted ways of thinking.

How to overcome inferiority complex

Of course, working on one’s inferiority and insecurity is hard so people are attracted to easy but ineffective solutions like, ‘Don’t compare yourself to others’.

There’s one caveat to this approach. Feelings on inferiority can sometimes be false alarms. A person may feel inferior not because they’re actually inferior, but because of the limiting beliefs, they’re carrying about themselves.

This is where self-concept and self-image come in. If you have a distorted view of yourself and your abilities, you need to work on your self-concept.

To demonstrate the role self-concept and values play in making us feel inferior or superior, I’d like to share a rather hilarious and shocking personal experience.

I was in the last semester of college. I, and a few friends, used to play table tennis in our university’s hostel. I want you to focus on three characters here.

First, there was Zach (name changed). Zach had a lot of experience in playing table tennis. He was the best at it among us. Then there was who had little experience at the game. Then there was me, the same as Foley. I had only played a few games before.

Needless to say, me and Foley got crushed by Zach from the start. The kicks he got from defeating us were palpable. He used to smile and enjoy the games all the time.

Perhaps out of the need to exert his superiority or compassion or not wanting us to feel dejected, he started playing with his left hand to make the competition fair. So far, so good.

While I could easily sense the enjoyment and superiority Zach was experiencing, Foley behaved oddly. He was taking being defeated by Zach too hard. He had a serious expression on his face all the time while he was playing.

Foley was taking the games too seriously, almost as if it was an exam. Of course, losing is not fun, but playing table tennis, in and of itself, is quite fun. He didn’t seem to be experiencing any of that.

I didn’t like losing either, but I was so engrossed in playing the game, winning or losing didn’t matter. I noticed I was getting better at it when I started beating Foley regularly. I liked the challenge of getting better and better at the game.

Unfortunately for Foley, his nervousness and anxiety, or whatever it was, only grew stronger. While I and Zach were having a good time, Foley behaved like he was working at an office, desperate to meet some deadline.

It became clear to me that Foley suffered from an inferiority complex. I won’t go into details, but he later revealed he’d never gotten good at any sport in his childhood or school life. He’d always believed he lacked ability in sports.

That’s why this innocent game of table tennis was having such a powerful effect on him.

I was losing to Zach too, but defeating Foley made me feel good and the prospect of one day defeating Zach’s left hand excited me. As we played more games, I kept getting better and better.

Eventually, I defeated Zach’s left hand! All my friends who’d consistently lost to Zach were cheering aggressively for me.

When I won, something happened that left me dumbfounded. The event that got etched in your memory forever.

When I won, it was as if Zach’s fuse blew. He went crazy. Craziness I have seen, but never of that level. First, he threw his table tennis bat hard on the floor. Then he started punching and kicking the concrete wall hard. When I say hard, I mean hard.

Zach’s behavior visibly surprised everyone in the room. No one had ever seen this side of him. My friends laughed and cheered louder to heal the wounds of their past defeats. Me, I was too baffled by the whole thing to give my victory the celebration it deserved.

For Zach, it was revenge time.

Zach begged me to play another game, just one more game. This time, he played with his dominant right hand and totally crushed me. He won the game and his self-worth back.

Zach’s behavior is a perfect example of how inferiority and superiority complex can co-exist in a person at the same time. Overcompensating for your inferiority by appearing superior is an effective defense mechanism.

Foley’s was a simple case of inferiority complex. I suggested he take up some sport and get good at it. Case closed. Zach was already good at something, so good he derived much of his self-worth from that thing. When his superior position got threatened, the hollow core underneath got exposed.

I lost too, over and over, but it didn’t destroy the core of who I was. Zach’s problem was that his self-worth has heavily reliant on his social standing.

My sense of self-worth lied in the fact that I was developing my skill in a sport. I was learning and making progress besides competing. I knew, if I practiced enough, I’d be able to defeat Zach’s right hand too.

This is called the growth mindset. I wasn’t born with it. Over the years, I learned to identify with and put my self-worth in my skills and abilities. Particularly, my ability to learn. The script in my mind was:

“I’m a constant learner. My self-worth lies in how I’m able to learn new things.”

So it didn’t matter much when I lost. I saw that as an opportunity to learn.

Zach is a good example of people that have a fixed mindset. People with this mindset are prone to feeling inferior because they see the world only in terms of winning and losing. Either they’re winning or they’re losing. Everything is a competition to them.

Having a fixed mindset makes people afraid to try new things. If they do, they don’t follow through. They jump from one thing to the next to avoid failure. As long as they’re doing easy things, they can’t fail, right? They’re also likely to be perfectionists and overly sensitive to criticism.

When I learn new things, my self-esteem soars, irrespective of whether I’ve defeated someone. Of course, I’d love to defeat someone, but my self-worth isn’t heavily reliant on that.

What’s your self-concept? How do you see yourself and how do you want others to see you? What are your core values? Do you have a solid foundation for your personality such that temporary victories and defeats don’t rock your boat?

The answer to these questions will determine where you put your self-worth. If you find you’re not achieving goals that are aligned with your self-concept and values, you’re bound to feel inferior. Achieve those goals and you’re bound to overcome your inferiority complex.

Take the inferiority complex test to assess your levels of inferiority.