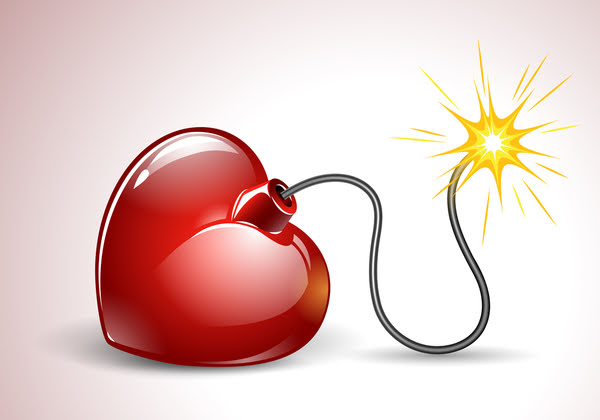 In a healthy relationship, the two partners have more or less equal power distribution.

A trauma bond gets formed when there’s a cycle of abuse in an abusive relationship. There are moments of connection mixed with moments of fear (abuse). If the relationship were entirely abusive, it’d be easy for the victim to leave.

A trauma bond is characterized by periods of extreme highs (connection) and lows (fear). A healthy relationship, in contrast, may have extreme highs and lows initially, but it stabilizes over time.

When a trauma bond begins to form, the abuser bombards the victim with love and affection. The relationship moves at a faster pace than usual.

Note that different people have different expectations of how fast a relationship should move. If there’s good chemistry between two people from the start, that relationship can move fast as well.

What distinguishes love bombing from a relationship with good chemistry is that the former is one-sided. It’s only the abuser who bombards the victim with love, not the other way around.

In a relationship with good chemistry, both partners typically shower each other with love.

A trauma bond can feel like a tight grip you can’t escape. The extreme highs and lows make the relationship unpredictable, leading to addiction. Even though you might realize that the relationship is toxic, you may be unable to leave.

3. Making excuses for the abuser

This is a huge one.

Since you’re hooked on the relationship, you can go to any length to stay addicted. You defend, justify, and rationalize the abuser’s behavior.

You may deny or minimize the severity of abuse. You may even blame yourself for the abuse.

We have a strong psychological need for consistency. If someone is not being consistent with their love, we tend to think it must be our fault.

The fact that the abuser in a trauma bond gives and withdraws love is hard for your mind to grasp. It creates a cognitive dissonance that you resolve by self-blame and giving the abuser the benefit of the doubt.

4. Fixating on the positives

The mind prioritizes survival and reproduction over everything else.

Therefore, even though a trauma bond contains a mix of positive and negative moments, your mind over-focuses on the positive moments. The mind likes to cling to whatever little hope there is.

Because if it doesn’t, it may lose a chance to survive little and/or reproduce. The cost of not clinging to the crumbs of hope is too high.

Addiction plus fixating on the positives generates an unwavering loyalty to the abuser, even in the face of danger. Sometimes the need to reproduce trumps the need for survival. So even if the relationship borders on being life-threatening, the victim may stay loyal to the abuser.

To an outsider looking at the abusive relationship, it doesn’t make sense. They think it’s ridiculous that the victim is staying in the relationship. They may even engage in victim-blaming. Of course, they have no clue what’s going on in the victim’s mind.

The abuser makes sure they have power over you. This means they’ll stifle your every attempt to regain power.

You’ll find that you have to walk on eggshells around them. You don’t know what behavior on your part might trigger them. Often their ‘getting triggered’ is an overreaction to maintain power and control by instilling fear.

Gaslighting is a common tactic used by abusers to distort their victims’ reality. They dismiss or deny your version of reality and impose their own.

If you say, “I felt offended when you said that”, they’ll say, “Oh, you’re imagining things. I never said that.”

If this continues, you come to a point where you start losing your sanity. You second-guess everything and over-rely on the abusive partner to interpret reality for you.

Gaslighting erodes self-esteem and self-identity over time. People trapped in a trauma bond don’t have much of an identity, to begin with. That is, their low self-esteem makes them likely to become a victim of abuse.

9. Isolation from friends and family

To carry out the abuse unscathed, the abuser has to isolate the victim from their friends and family. This is because if something’s wrong with the relationship, family and friends would be the first to raise an alarm.

One of the solid early signs of a trauma bond is that you have no say in the relationship whatsoever. You feel like your partner makes all the decisions. This is when the abuser starts to establish a power imbalance in the relationship.

Compare this to a healthy relationship where both partners have a say in relationship decisions based on the more or less equal power distribution.