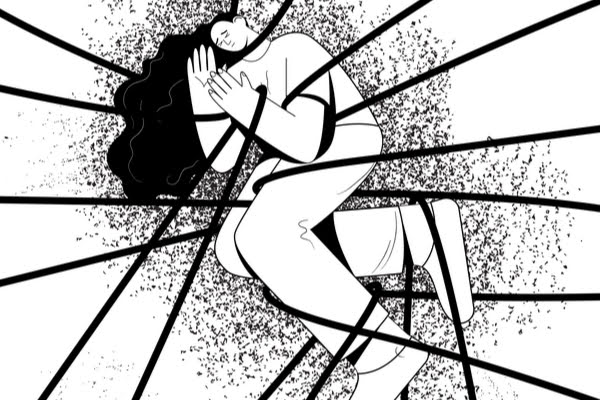 Trauma happens when we find ourselves in a threatening situation. The threat could be to our survival or reproductive success. Events that cause trauma include accidents, illnesses, natural disasters, break-ups, losing a loved one, abuse, and so on.

A trauma bond is a bond that gets developed between an abuser and the abused. The victim forms an unhealthy attachment to the abuser. Trauma bonds can form in any type of relationship, but they’re common and most severe in romantic relationships.

Studies have shown that there are specific instances where trauma bonds are much more likely to form.1 These are:

In this article, we’ll discuss how trauma bonds get formed and what we can do to break free of them.

How trauma bonds get formed

We respond to serious dangers in two primary ways- fight or flight. If we can ward off the danger, we fight. If we can’t, we take flight. In trauma bonding, the victim is unable to do either.

If you look closely at the situations that are likely to lead to traumatic bonding, you’ll notice they have a common feature. The victims in those situations are often too powerless to either fight or take flight.

So, they adopt another defensive strategy- freeze. They get stuck in an abusive relationship. They feel fear but are unable to do anything about it.

The key to understanding trauma bonds is realizing that the abusive relationship typically isn’t 100% abusive. If it were, then the victim would’ve left if they had the power to do so.

For instance, adults in abusive romantic relationships often have the power to leave, but they don’t. Why?

It’s because the relationship isn’t 100% abusive. Instead, these unhealthy relationships tend to go through cycles of abuse (fear) and love. If there were only fear in the relationship, it would’ve been much easier to leave.

If someone chooses to stay in an abusive relationship, they’re gaining from it more than they’re losing, at least in their own minds.

Trauma bonds can be addictive because they work on the principle of intermittent rewards. The victim knows there’s love in the relationship, but they don’t know when their partner will be loving towards them.

Just as people get hooked on social media because they don’t know when they’ll get the next notification, trauma bonds leave their victims craving for affection.

The mind prioritizes survival and reproduction

If there’s a mix of love and fear in a relationship, our minds are wired to emphasize love because being loved can be critical for reproduction. Sure, fear can threaten our survival. But in the tussle between survival and reproduction, the latter wins. Some animals even sacrifice their lives to reproduce.2

A child who depends on her abusive parent for survival can’t come to terms with the abuse. Her mind holds on to the belief that her parent loves her and it was her fault that the abuse happened. This allows her to explain away the abuse so she can keep expecting only love and care from her parent.

The same dynamic operates in adult relationships, but this time, reproduction is at stake. The mind is wired to do what it can to make us stay with a romantic partner and reproduce.

If there’s a mix of abuse and love in such relationships, the mind focuses on the love part and ignores the abuse. As a result, people get stuck seeing their partners in a positive light and get entangled in a trauma bond.

People who’ve been abused in their childhood by their parents or other caregivers tend to seek similar relationships as adults. There are a couple of reasons for this:

1. They don’t know any other relationship template

2. They’re trying to process their past trauma

Trauma that doesn’t get resolved lingers in the mind. The mind seeks to process it via intrusive thoughts, flashbacks, and even nightmares. Sometimes, it seeks to process and heal the trauma through re-enactment.3

Re-enactment allows the victim to re-experience the trauma so they can process and make sense of it. Seeking abusive relationships in adulthood could be an unconscious strategy for processing childhood trauma through re-enactment.

Trauma bonds can break on their own when abuse far exceeds love or when love disappears, and only abuse remains.

Say you’re in a trauma bond with this person who verbally abuses you. The amount of love they shower upon you counterbalances their verbal abuse.

One day, they physically abuse you, and you decide you’ve had enough. Their love just isn’t enough to counterbalance so much abuse.

Alternatively, say you are trauma-bonded to this person, and they suddenly withdraw all their love and affection. All that remains is abuse, and you decide that the relationship isn’t worth it.

Trauma bonds, like any addiction, rely on the hope of getting that next fix. When that hope is gone, the bond is gone.

If you think you are trauma-bonded in a semi-abusive relationship, you can still do some important things to recover:

1. Become conscious of the abuse

I’d still recommend talking to your partner first just to get their perspective. It’s possible they might be unconsciously repeating their own childhood patterns of abuse. If you two can work it out together, great.

If they show no remorse or willingness to fix things, it’s likely that the abuse was deliberate.

2. Heal your own past traumas

It’s possible you’re unconsciously seeking abusive relationships to process your past traumas. You need to heal those traumas separately if you want to put an end to this pattern of re-enactment.

For example, if you had issues with your father, you can resolve those feelings by confronting him. Closure is the medicine of trauma.

Sometimes the feelings can be too overwhelming to do anything about them. In such times, you want to distance yourself from the abuser so you can give your mind space to make sense of things.

It gives you the chance to view your relationship objectively and see it for what it really is- unhealthy.

It helps to look at the examples of healthy relationships- whether in real life or fiction. It can help you override your default relationship templates and scripts.

Seeking social support is one of the best ways to regulate negative emotions. When you’re trying to get over abuse and recover from trauma, you need to grieve properly. Misery shared is misery halved.

Also, talking about your problems to others helps you view your abusive relationship objectively. You’re able to finally see how your mind was putting up with all kinds of rubbish to prioritize survival or reproduction.

The mind’s just doing what it’s designed to do. We need to have some compassion for our minds, too. They’re excellent at doing what they do. Sometimes they get a bit carried away, and that’s okay.