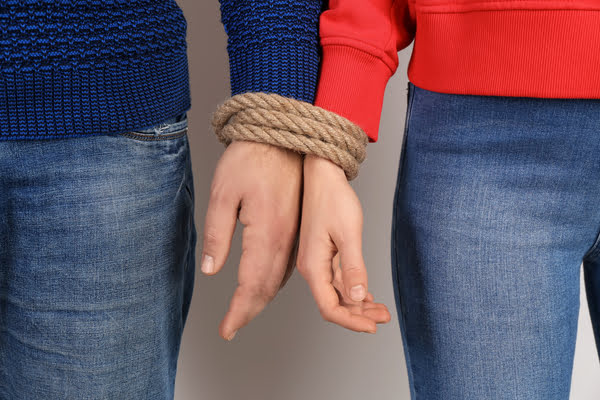 A trauma bond gets formed in abusive relationships and can be mistaken for love. It’s a deep emotional attachment that a victim of abuse develops to the abuser. In this article, we’ll look at critical points of difference between a trauma bond and authentic love.

What do you think happens when there’s a mix of fear and connection in a relationship?

The relationship is still abusive, but there are also moments of connection.

This mixed situation puts the victim of abuse in a very challenging position. They can’t leave the relationship because the positive moments keep their hopes for the relationship alive. Often, victims of abusive relationships falsely think they can change their abusive partners.

The victim’s mind, driven by the desire to survive and reproduce, focuses on the positives of the relationship and disregards the negatives. They become addicted to the relationship because a relationship with a mix of fear and connection is highly unpredictable.

In contrast, there’s a sense of safety, security, and predictability in a relationship driven by love.

A trauma bond progresses at a fast rate. There’s an initial phase during which the abuser love-bombs the victim. They shower the latter with compliments, outrageous gifts, and acts of service.

The love bombing stage may feel too much to handle for the victim, but their boosted ego ignores the warning sign and proceeds with the relationship.

In real love, the connection is established gradually. There’s no love-bombing phase. Both partners slowly open up to each other and show more and more interest over time.

There’s limited communication in a trauma bond. Deep conversations are avoided. The victim barely gets a chance to voice their needs and wants.

There’s open communication in love. Both partners get an equal chance to communicate their needs and wants.

Due to its extreme highs and lows, a trauma bond can be highly addictive. The victim doesn’t know when they’ll get the next reward (connection). This makes them stay in the relationship looking for the next reward.

When they get the reward, they’re grateful. When they don’t, they tend to blame themselves.

A loving relationship, on the other hand, feels like a privilege. There’s an overflow of connection and intimacy. Both partners feel lucky to have each other. They have a constant, deep gratitude for the relationship.

There’s an imbalance of power in a trauma bond. The abuser has more power than the victim. The abuser makes use of their power to exploit the victim.

In love, the distribution of power is more or less equal. No one feels controlled.

There’s co-dependency in abusive relationships. The victim is forced to depend on the abuser via manipulation, blackmailing, torturing, gaslighting, etc. Over time, the self-identity and self-esteem of the victim erode.

In authentic love, both partners are likely to have secure attachment as their primary attachment style.

There are weak or no boundaries in a trauma bond. As a result, the victim of abuse may get enmeshed with the abuser, adopting the latter’s worldviews and feelings. And losing themselves in the process.

In love, both partners maintain healthy boundaries via open communication and empathy.