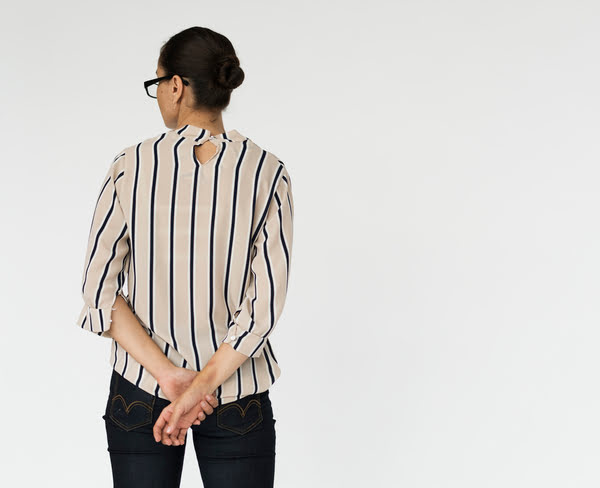 In this article, I’ll cover the possible meanings of this gesture, providing examples and accompanying gestures for each.

First, note that older people and people with back problems may assume this gesture just because it’s comfortable. For others, this gesture may be habitual and devoid of any meaning.

Make sure you’ve eliminated these possibilities before you go on to interpret this gesture.

Hands behind the back meaning

Keeping hands behind the back signals dominance, authority, leadership, and confidence. The person assuming this gesture is communicating:

Keeping hands behind the back exposes one’s front part of the body and vital organs. The opposite gesture of crossing arms in the front indicates defensiveness.

So, hands behind the back signal the opposite of defensiveness, i.e., feeling secure.

“I’m so not afraid that I’ve exposed my vital organs. I challenge anyone to attack me. I know no one will dare to do that.”

One hand’s palm usually rests in another’s palm in a loosely clasped position. The feet are apart and planted firmly in the ground, head is lifted up, and the shoulders are pulled back. The chest is pushed forward to make the person appear as big and tall as possible.

In the animal world, the bigger you are, the more dominant you tend to be.

This gesture is common in people at the topmost positions in the socioeconomic hierarchy, like politicians, managers, and CEO’s. It’s also common in soldiers, policemen, priests, and teachers.

Imagine a school teacher doing a round in an exam hall with their hands clasped behind their back. They have the attitude of:

“I’m in charge here. I’m not going to allow anyone to cheat.”

When hands are tightly clasped behind the back, it is a self-comforting gesture- an attempt to make oneself feel secure.

Why would someone attempt to make themselves feel secure?

Of course, because they’re feeling insecure.

When the hand, wrist, or arm is clasped tightly behind the back, the person subconsciously gives themselves a ‘self-hug’. They’re in a situation where they could use a hug to feel more secure.

This gesture is assumed by someone when they’re going through some psychological discomfort like nervousness, anxiety, anger, or frustration.

The person assuming this gesture usually stands with feet together, hunched shoulders, and head down. All these submissive gestures make the person look smaller.

In some cases, an arch may develop on the person’s back, giving it a feminine appearance.

A variation of this gesture is keeping one hand behind the back with fingers crossed.

You may notice this gesture when a person is talking to their crush for the first time. You may also see this gesture in someone holding back their frustration or anger.

They’re subconsciously trying to hold themselves back from attacking the other person.

When people talk openly, they often speak with their hands. They display their palms and make hand gestures.

Hiding the hands behind the back can thus be an attempt to hide something or be secretive.

Maybe the person doesn’t want to reveal something or is lying.

Look for other ‘hiding’ gestures and facial expressions like tilting the body away from you, looking away, and looking down. They want to leave the interaction if their feet are pointing away from you.

This gesture is usually assumed by people in situations where they want to hide but can’t hide. They’d like to escape the problem, but they can’t. They can only hide their hands behind their back.

You may be normally conversing with a person- their body language vibing with yours. But as soon as you bring up a sensitive topic, you may instantly see their hands rushing behind their back.

They probably want to avoid the topic at all costs. So you can expect them to not talk about it, let alone openly with their hands.