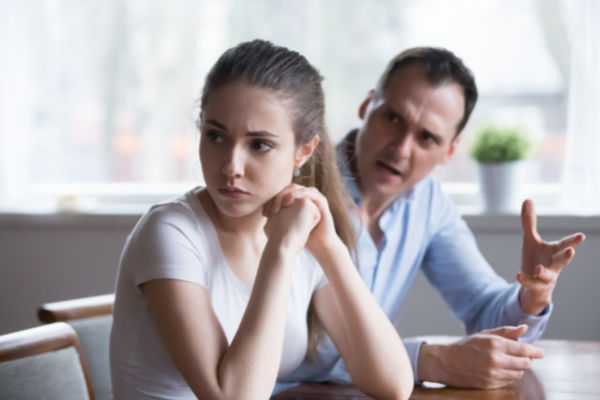 A sociopathic person is one who has antisocial personality disorder. Sociopaths pursue their self-interest with disregard to others. They have a win-lose mentality. While both men and women can be sociopaths, sociopathy is more common in men.

Sociopathy in boys is often detected at a young age (around 8 years). It’s not clear what exactly causes sociopathy. Experts believe it’s related to traumatic experiences.

If you’re a woman married to a sociopath, it’ll help to understand sociopathy better before we can discuss how to deal with a sociopath husband.

Let’s look at the common signs of sociopathic behavior. If most of these signs are present in someone, they’re likely to be a sociopath.

To have their way with people, sociopaths often behave aggressively. Aggression forces the other person into submission and compliance. Sociopaths are prone to verbal and physical aggression.

Gaslighting comprises a cluster of behaviors including manipulation, lying, deceit, crazy-making, and blaming. It’s a way for the sociopath to devalue the other person. Through gaslighting, the sociopath makes their victim question their sanity and feelings.

Gaslighting allows the sociopath to bend reality according to their own wishes- a reality that is undesirable and uncomfortable for the victim. A reality in which the victim is at fault.

Having empathy and consideration for others flies in the face of a win-lose mentality. So, sociopaths have nothing to do with these traits.

Psychologically healthy people apologize to those they care about when they know they’re in the wrong. Hurting others creates guilt and remorse in them. They’re motivated to repair their relationships.

Sociopaths lack remorse. They’re more interested in winning and being right. Apologizing is like losing for them. So, they’ll never apologize, even if they’re clearly and demonstrably in the wrong.

Sociopaths desire control and domination of others. They tend to control everyone around them. This way, they can bend others to their wishes. If their control is threatened somehow, their ego gets hurt and they seek revenge- to gain back lost control.

For a sociopath, charm and charisma are masks they wear to get what they want. People who have internalized charm make it a part of their personality. It’s a way of their being.

But sociopaths use charm as a means to an end. As soon as they get what they want by being charming to people, the mask drops off. It’s too much work holding on to and presenting a false self.

Dealing with a sociopath husband

If you’re married to a sociopath, chances are you fell for their superficial charm and charisma. Now that you are part of their life, their real self is coming to the fore.

Before you do anything, take a moment to look at the trajectory of your relationship. If it’s not going well, it’s likely to get worse with time. Nip the evil in the bud using the following strategies:

1. Complain about your problems assertively

You don’t want to become aggressive with a sociopath because they want to win at all costs. So they’ll respond to your aggression with even more aggression. If you can pull off complaining about your problem in a calm, non-hostile and assertive manner, you won’t push their ‘aggression button’.

This may make them at least consider your problems, if not empathize with you. The key is to keep complaining until they listen. I know it can be hard but try not to mix any emotions in your complaints and see what happens.

Humans are rarely all good or all bad. If you look for positive traits in your husband, you’ll surely find them. Highlight and praise those traits in him so his identity latches on more to such traits.

If you do it enough, it may induce cognitive dissonance in him the next time he goes back to his sociopathic self.

Of course, it’s difficult to praise someone who has hurt you. You can do that when your relationship is going well or neutral.

If your husband is dominating and controlling, it’s natural to protest against this behavior without exploring the root cause. For example, if he insists on checking your texts, it may be because he’s afraid you’ll cheat on him.

Instead of fighting his controlling behavior, try addressing the root cause. Give him reassurance that you won’t leave him (unless you are). Re-establish trust.

Once you’ve done all that, you can then tell him how his insistence on checking your texts feels controlling to you. He’ll be much more likely to listen to you when he’s not under the grip of fear.

Many experts believe sociopaths cannot change. I believe that humans can be taught anything provided they have a willingness to learn. This is the growth mindset. If sociopaths, for some reason, learned sociopathy, we can also teach them win-win.

The key here is to appeal to their rational mind. With no aggressing and blaming, try to make them understand how their behavior is hurting you and the others.

Social proof always helps. If your husband has hurt your kids and the kids are silent about it, then he may think you keep blaming him because you’re an enemy. This activates his win-lose mentality.

Instead, when the kids also express how they’ve been hurt, he may be forced to self-reflect. It’s unlikely he’ll accuse every family member of being an enemy.

Try removing him from his behaviors when you’re complaining. Instead of saying:

“You insulted me in front of my sister. How insensitive and careless can you be?”

“I felt insulted when you passed that insensitive comment during the family dinner.”

Of course, this doesn’t mean you ignore such behaviors. All you’re doing here is framing your complaints differently. You’re setting expectations of good behavior and framing inappropriate behavior as occasional slips.

6. Leverage his desire to win

Think of ways in which you can leverage the desperate need of a sociopath to win at any cost. Saying something like “You’re failing to understand the nature of the problem” might trigger his need to win i.e. be able to understand.

Of course, it’s all about how you say it. If you say it submissively or defensively, he’ll dismiss and devalue you in a ‘What the hell do you know?’ kind of way.

Instead, you want to challenge him. Say it in a “Let’s see if you can do this” tone without mocking him.

For instance, in the middle of an argument, when the emotions are starting to get intense, you can step back and say:

“Wait a minute! I don’t think you’ve fully understood what my problem is here. Can you say what it is?”

This can give him a chance to step outside of himself and look at things more objectively. His first reply will probably be dismissive. To which you can reply:

“Yes, but there’s more than that…”

As he jumps through your hoops and tries to explore your problem more, the problem will become objective. You get removed from the problem and his dismissiveness subsides because there’s no one left to dismiss.

Now, it’ll be more about winning at understanding the problem versus winning over you.

You’re probably only focused on the negative traits of your husband. Things are rarely so black and white. Weigh both their positive and negative traits. See if the positives outweigh the negatives. If they do, then maybe your marriage is worth saving.

If the negatives far outweigh the positives, there’s no point in continuing the relationship. If you’ve done all you can to change him but nothing has worked, maybe it’s time to move on.