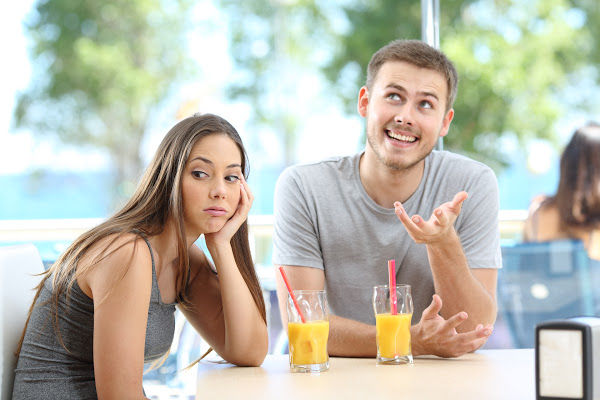 Indifference simply means not caring. When someone is indifferent toward you, they’re showing they don’t care about you. Caring for others is an investment in others. Therefore, indifference can be seen as a way to withdraw or decrease investment from someone.

When we enter relationships, we expect to give and take. Indifference is a form of not giving. It’s the opposite of validation- a basic need of humans.

Hence, when someone is being indifferent towards you, you detect this investment imbalance and it bothers you. Of course, indifference from people you’re indifferent to doesn’t matter because you’re not invested in them.

Indifference from someone only bothers you when you’re invested in them and care about them. You’re investing in them and you expect them to give back. But they’re not giving back. They’re being indifferent towards you.

There are many ways to show indifference but the most common way is to avoid, or show a lack of interest in, communicating with you. Unwillingness to engage is the surest sign of indifference. All other investments come after engagement.

Indifference can manifest in the following ways:

If you’re the person who always starts conversations with them in your relationship, we got a problem. Chances are they’re indifferent towards you. In a healthy, balanced relationship, both parties frequently initiate contact.

2. Not asking you questions about you

Hence, a lack of interest in who you are as a person can be a sign of indifference. Once they get what they want from you, the relationship is doomed.

Not asking questions about you, your background, your interests or your values shows they’re indifferent towards you.

Again, this is a way to disengage and show indifference. Communication equals investment and avoiding or cutting short communication shows unwillingness to invest.

This can manifest in face-face conversations where they don’t pay attention to what you have to say. Body language gestures showing a lack of interest or boredom reveal all.

While texting too, you can tell when someone is interested in having a conversation with you and when they’re not.

When they answer with a short “Yes” or a “No” or don’t put any effort into extending a conversation, it’s likely a sign of indifference. They just want to escape the conversation.

The extreme manifestation of this would be not returning your calls or not replying to your texts at all. If that happens to you, you need to re-evaluate where you stand in the relationship.

What could make someone not invest in a relationship? Half the job of responding appropriately to indifference is figuring out what’s causing it.

Following are the possible reasons behind a person’s indifference:

Again, relationships have to be about give and take. If you give but don’t get, move on.

2. They really don’t care about your stuff

Just because people are in a relationship doesn’t mean they have to like every little thing about the other person.

Yet we humans have a tendency to validate our life’s decisions, hobbies, and interests. We want others, especially those close to us, to like what we like. If it happens, great! But don’t expect it to happen for every little thing.

Just because they’re indifferent towards a quirky hobby of yours doesn’t mean they’re not interested in you. There may still be dozens of aspects of your personality they still like.

You may show them a movie by your favorite director and they’re “meh” about it. They just don’t care about this stuff. It’s their opinion and you ought to respect it. They’re indifferent to it, not necessarily to you.

3. You pissed them off and now they’re punishing you

This happens all the time in relationships. If you did something they don’t approve of, they want to communicate their displeasure. A common way this is done is through indifference. The goal is to motivate you to make amends and avoid the behavior in the future.

This temporary withdrawal of investment is based on what you did. Avoid jumping to the conclusion that they’re not invested in you.

Sometimes, we display behaviors opposite to how we really feel. Freud called this reaction formation, and it’s a defense mechanism.

So, a person might be interested in you. This makes them feel powerless. They don’t like the effect you have on them. It makes them anxious.

So they communicate the opposite to manage their anxiety and improve their image. They show they’re indifferent towards you.

As a result, they may alternate between caring and not caring, sending you mixed signals.

If one party in a relationship feels they’re giving more than they’re getting, they might carry out an investment test. They withdraw or decrease their investment to see how you’ll react. They expect you to increase investment or keep investing how you’ve been investing.

If you do these things, you pass the test. If you also withdraw investment, responding to indifference with indifference, you make them feel you’re not invested in the relationship as much as they are.

At this point, they might either end the relationship or re-start investment if they’re really into you, hoping you’ll invest in the future.

6. They found someone else

Not all have the courage to be straightforward and honest in their relationships. If they found someone else, they might start being indifferent towards you, hoping you’ll end the relationship. That’s relationship death by a thousand cuts of tiny indifferences.

If you’re the one who found someone else and catch yourself being indifferent, just tell them. End the relationship right away. It’s not cool to leave people hanging on false hope.

How to respond to indifference appropriately

As you’ve seen, there can be many reasons people are being indifferent towards you. The human tendency is to always jump to the conclusion that they don’t care about you. But you got to collect more data and do more analysis before you can reach that conclusion.

Your response to indifference will depend on the person, the situation, and the stage of relationship you two are in.

In general, be more sensitive to indifference in the initial stages of a relationship. In established relationships, it’s okay for partners to occasionally show indifference.

Here are some specific things you need to note though:

Is it one-off or continual indifference?

A one-off indifference event is unlikely to be about you but about what you did or even about them. It’s likely to be a temporary withdrawal of investment.

If the indifference is continual, it’s likely they don’t care about you.

Let’s face it: Humans have a strong tendency to be selfish. Maybe they’re taking your investments in the relationship for granted. They’re getting out of it as much as they can and giving nothing back.

Humans naturally keep track of ‘give and take’ in relationships. However, when you’re much more invested in them than they are, because, let’s say, they’re super attractive and you’re average-looking, it’s easy to lose track of give and take.

“We have so much to gain from them (reproductively). It’s okay if they don’t invest. Let’s forget about investment tracking for a while and keep thinking about how awesome it’d be if they were ours.”

Thing is, if they’re not into you at all, you’re playing a losing game. Your own mind deceives you into believing that you can get something that’s out of your league because the mind is designed to be selfish and maximize reproductive gains.

This explains why people become obsessed with celebrities and those who’re way out of their league.

If you keep giving, hoping to get in the future, maybe it’s time to test the validity of those hopes.

What are they gaining by being indifferent?

Asking this question to yourself can be helpful. As pointed out earlier, showing indifference can be a strategy to mask interest or to test you.

When you can point to the exact reason they’re being indifferent, you can then respond accordingly.

Best strategy in any situation: Confront them

If you’re on the receiving end of indifference and can’t figure out the exact reason, confront them. It’s the best way to clarify things and figure out what’s going on.

You can’t make decisions based on assumptions. More often than not, that leads you down the wrong path.

Often, we see reality through our own narrow lens of perception. By confronting them and telling them how you feel they’ll be encouraged to share their version of the story. This will broaden your perception and you’ll make a better decision.

Everyday indifference: Putting it all together

Indifference doesn’t always have to be overt. Sometimes, it’s shown subtly. For instance, you ask your partner what dress you want to wear and they’re like:

Another example would be asking them where you should eat and they say:

Maybe they really don’t care about your dresses or choosing what place to eat. Or it may be that they’re deliberately being indifferent. Or both.

Consider how showing even a bit of investment makes all the difference.

Say, instead of blurting out “I don’t care”, they first looked at some dresses and then said:

This wouldn’t make you feel invalidated because there was some, albeit tiny, investment on their part. They cared enough to look at the dresses. In your mind, that automatically gets translated to “They care about me”.

In sum, before you assume that someone is being indifferent toward you, you need to collect more information. It’s because decisions based on such assumptions can have a serious impact on your relationships.