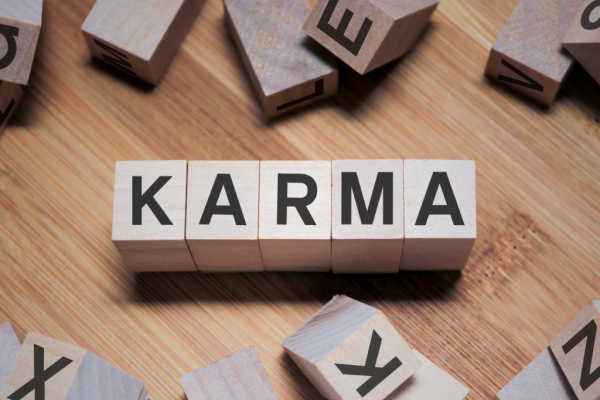 Is karma real? Short answer: No. Keep reading for the long answer.

“What’s destined to happen will happen.”

“Your actions dictate what will happen.”

Many people believe in both karma and fate simultaneously, without ever realizing the inconsistency between the two worldviews.

In this article, we’ll explore the psychology behind believing in karma. But before we can dig into that, let’s throw some light on why there’s no such thing as karma.

What happens to people depends on so many factors. The type of personality they have is just one of many factors.

Whether you’re a good or a bad person will likely affect how others treat you, no doubt. But that’s not karma, that’s reciprocity- a feature of human nature.

Why people think karma is real

The answer lies in the fact that we’re social species. Our mind evolved to work effectively in social groups. We mistake what is true for our social interactions with what is true for the universe.

It’s largely true that if you do good to others, others will do good to you. The golden rule works for human relationships. The universe, however, is not a human.

Belief in karma is rooted in people’s tendency to ascribe agency to the universe- to think of the universe as a person. Therefore, they think that if they do good today, the universe will repay them later, just as a friend would. They believe the universe is just.

The concept of justice and fairness doesn’t extend beyond the social relationships of some mammals. People act like the universe is part of their mammalian social group.

Besides this tendency to ascribe agency to the universe, other psychological reasons people believe in karma are:

Humans worry about the future constantly. We’re always looking for reassurance that our future will be good. Astrology and horoscopes are popular for a reason.

At the same time, what happens to us in the future is highly uncertain. So we seek some form of certainty.

If I tell you that all you have to do to ensure a nice future is to be nice to others, you’ll find the idea attractive. You’ll be like:

“Okay, I’m just going to be a nice person from now on and my future will be handled for me.”

Truth is: You could be the noblest soul on the planet and yet, one day, you might slip on a banana peel on the street, hit your head on a rock, and die (Hope that never happens!).

It won’t matter what good you did or didn’t do in the world. Your pleasant personality doesn’t lift you above the laws of physics and nature. The reduced friction between the banana skin and the street will not change because you’re a good person.

What particularly irritates me is when a misfortune befalls someone and people scan the victim’s past to pick out a ‘bad behaviour’ and attribute the misfortune to it.

They’re just trying to reinforce their belief in karma. It’s unfair and highly offensive to the victim.

Similarly, when someone achieves outstanding success because of their dedication and hard work, attributing it to their past good deeds is equally annoying.

2. Connecting the present to the past

Belief in karma lets people make connections between the present and the past where these connections are unwarranted and illogical. We also observe this in superstitions.

Humans have a deep desire to make sense of things and can go to a great extent to attribute social causes to non-social events.

They can’t seem to think of any other possibility. What else can you expect from a species evolved to be social, right?

They’ll selectively recall social events from the past, trying to prove the ‘law’ of karma.

One must strive to only make connections between the present and the past where such a connection is warranted.

People want to believe they live in a just world where everybody gets what they deserve.1

Seeing justice handed out, whether by a human or the universe, gives people immense satisfaction. Again, this also plays into their need for control. As long as they’re fair, they shall be treated fairly in their social groups.

If people are treated unfairly, they can’t always get justice, especially if they’re not in a power position. In such a scenario, believing that karma will take care of the oppressor helps both the ego and the innate sense of justice.

In line with what we’ve discussed so far, a study found that when people can’t control important and uncertain outcomes, they’re more likely to help others.2

This explains why some job seekers donate to charity just before the final decision of their application. And why students suddenly become religious before exams, promising to be a good person and repenting for their mistakes.

Belief in karma and selfishness

Belief in karma does reduce selfishness and makes people more likely to help others, but only because such a belief helps them to be more selfish later. It reveals the tensions that exist between group members, the internal forces of selfishness and altruism one has to balance living in a group.

Mostly, humans show altruism only to the extent of reciprocity. They’re not helping you if you don’t help them, unless you’re a kin.

For humans to make themselves more selfless than they really are, they had to invent the construct of karma. Helping someone who doesn’t help you back is costly.

If you believe that some cosmic force will make up for your costs later (with interest), you’re more likely to incur costs on yourself now. It’s not that hard anymore.

Helping others without expecting anything back sure sounds nice, but I am yet to see its evidence in the world.

While belief in karma might seem benign, it causes psychological problems for many people. It blinds them to reality and impairs their problem-solving abilities. Worse, when something bad happens to them, they think it’s their fault even when it clearly isn’t.

As I wrap up this article, I admit I’m secretly hoping I don’t get bad karma for debunking karma.