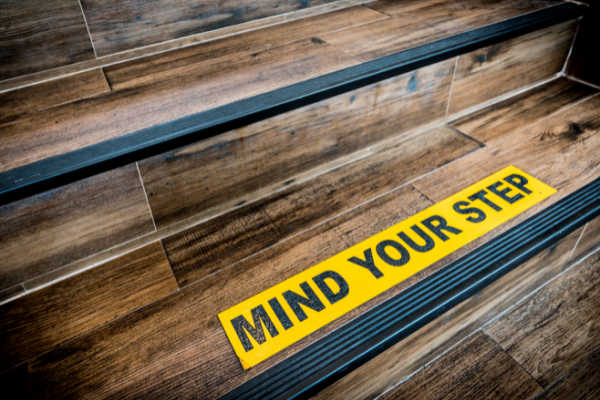 The ladder consists of six rungs with selected reality at the bottom and actions at the top. The surface on which the ladder rests is observable reality.

Imagine yourself carrying this ladder with you all the time. You don’t plant it everywhere. You plant it in places where you want to climb. If you want to climb a wall, it makes no sense to plant the ladder against your house.

Similarly, we plant our ladders of inference in parts of reality we think will help us make useful inferences. The result is that we filter information from reality according to our needs.

Reality is too complex and detailed for the mind to process. Therefore, to work with reality, the mind selects slices of it.

When you step on the first rung of the ladder of inference, you step on a selected reality. You can’t adjust your ladder now to select another part of reality. From here, you can only move up the ladder.

Moving up the ladder

Once you’ve assigned meaning to the selected reality, you then make assumptions about it. These assumptions may be derived from interpreted reality or they may be borrowed from your past experiences working with similar realities.

When one or more assumptions point in the same direction, they lead to conclusions. Conclusions lead to beliefs. And, finally, beliefs drive your actions and decisions.

It would’ve been nice if we all planted the ladder carefully and moved up on it slowly and deliberately. But the mind tends to move up this ladder rather quickly.

There was an evolutionary advantage in interpreting reality as quickly as possible. If our ancestors heard a twig breaking in the bushes, it was far better for their survival to infer that a predator broke it than taking the time to figure out the actual reason (say wind).

So, we have a tendency to move up the ladder quickly- sometimes in fractions of a second- and make quick inferences that are likely to be wrong. This leads to false beliefs and actions based on those false beliefs.

From up to down, then back up again

You already have assumptions and beliefs about a lot of things that you formed thanks to your experiences. Most of the mental work you need to do doesn’t involve planting the ladder and climbing, but moving down the ladder.

Maybe there are some actions that you’re taking that aren’t producing the desired results. Maybe you have negative beliefs about a group of people that you picked up from your community.

Your current actions and thinking are near the top of the ladder. The goal is to question if you deserve to be on the rung that you’re currently on.

Did you reach this rung in a slow and deliberate manner, or unconsciously and quickly?

If you’ve reached it without deliberate thought, it’s time to move down the ladder. Doing this will help you get closer to reality.

You may find that you have to look more at the surface (gather more information from reality), adjust your ladder and then plant it in the right spot. The next climb may or may not help you climb to the top, but you’ll be closer.

If you’re in the middle and find that the top of the wall is still too far for your hands to reach, go back down and re-adjust the ladder. You keep doing it till you find the right spot.

This iterative process is how we learn and develop beliefs that are more grounded in reality.

Questions to ask yourself moving down the ladder

Depending on where you find yourself on the ladder, following are the questions you can ask yourself to move down and be more grounded in reality.

The reinforcing nature of the rungs

You keep moving up and down the ladder, strengthening your beliefs and repeating the same actions.

We see this happen all the time, for example, in political debates.

In truth, the reality is often much more complex and nuanced. People only take slices of it they can use for their own agenda.

Of course, this isn’t all bad. We don’t always need the entirety of reality to make valid points or draw sound conclusions. Often, we only need to scan so much of reality to work with it. But it helps to know that we have a tendency to slice and dice reality according to our needs.

At the end of the day, reality is king. The more grounded we are in reality, the better for us. The ladder of inference can help us achieve that grounding.

Let’s go over a real-life example to clarify how people use the ladder and how they can improve their thinking.

Jim was texting Jane, and the conversation was going great. Suddenly, Jim received a call from his manager. He picked it and the call lasted half-an-hour. After 30 minutes, Jim got back to the texting and replied to Jane’s previous message. Jane was upset that Jim took 30 minutes to reply. She concluded Jim wasn’t into her.

Here’s how Jane moved up the 6 rungs of the inference ladder:

Jane’s mind was hyper-focused on the fact that Jim took 30 minutes to reply. Her mind ignored the fact that they had been having a great conversation prior to that for almost an hour.

Instead of exploring other reasons for the late reply, she quickly assigned the ‘Jim is ignoring me deliberately’ meaning to her selected reality.

Her mind then borrowed assumptions to support her chosen meaning. Assumptions like:

All this led her to conclude that Jim wasn’t into her because she’s not pretty, men don’t find her interesting, and that she’s not fun to talk to.

The belief that she can’t attract men gets solidified in her mind. This belief then forces her to selectively interpret reality in the future, creating a self-reinforcing cycle.

She stops texting Jim and seeing men in general. All because she moved up the ladder too quickly, over and over.

Here’s what Jane could’ve done instead to move down the ladder:

“Is it really true that Jim isn’t into me?”

“Why am I jumping to this conclusion?”

“Is it true that I’m not pretty? I mean, I have received compliments in the past.”

“Why am I assuming men don’t find me interesting? I’ve had wonderful and fun conversations before.”

“What else could the late reply mean other than he’s ignoring me?”

“Maybe I should ask him why he replied late to be sure.”

“What if he got an emergency call?”

This is the step where she ‘adjusts the ladder’. She asks Jim why he replied late and he explains. She then moves up the ladder again to conclude that Jim is still into her. Finally, she continues texting him.