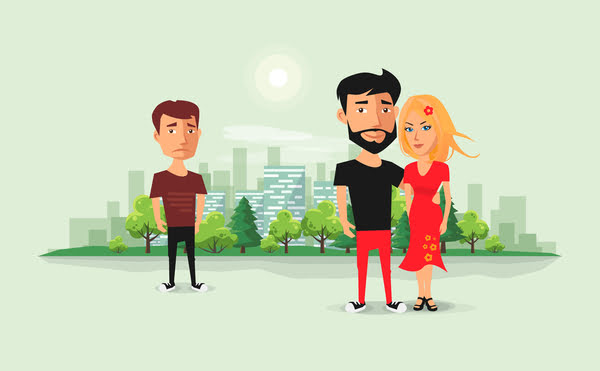 Jealousy, like other social emotions such as guilt, embarrassment, and shame, is a complex emotion. People get jealous differently, to varying degrees, and respond to it in a variety of ways.1

Researchers have defined jealousy in numerous ways. I like to keep things simple. Long story short, jealousy is triggered by two situations:

Let’s look at these two situations separately before we dive into levels of jealousy.

When someone has what you want

In fact, the acquisition of resources increases our social status because it makes us valuable in the eyes of our society. A valuable surviving and reproducing member of our society.

Because resources and the social status they bring matter so much, we have built-in psychological mechanisms for social comparison. Social comparison not only lets us know the status of the members in our social group, it also provides critical information about who to associate with and who to turn to for help.

Social comparison also gave our ancestors information about who to steal from. After all, seeking assistance and forming alliances is not the only way to acquire resources.

Where does jealousy fit in all this?

Jealousy is an emotion that motivates us to acquire resources ethically (envy) or unethically. When someone has what you want, you’re likely to approach them, learn from them, and ask for help. Provided you’re ethical.

If you’re unethical, you’ll steal from them.

When someone has what you want, and you can’t acquire it, jealousy may also motivate you to destroy what they have. So, both of you stay losers and at the same level.

When someone tries to take what you have

How jealous you feel in a particular situation will depend on the level of threat you experience. Of course, the greater the danger, the stronger your jealousy.

Like other emotions, jealousy tends to reinforce and build upon itself. A mere spark of jealousy over time may become a raging fire.

In this section, I’ll take you through the different levels of jealousy. I’ll throw light on how you’re likely to think and behave at each level.

It’s easy to get trapped and confused in this emotion. When you have some clarity about how jealous you are, you can take the appropriate action.

No one can be free from jealous thoughts for evolutionary reasons discussed above. So, it’s pointless to be mad at yourself for feeling jealousy. What you must learn, however, is how to manage this emotion.

For instance, if you’re single and a friend tells you that a mutual friend has started dating, the possibility that they might get into a happy relationship can trigger jealous thoughts in you.

Note that your mutual friend is only dating, and a relationship might still be a very distant thing in their mind. Yet, this tiny piece of information is enough for your mind to trigger jealous thoughts.

Say you’ve been applying to jobs for two months without any success. Your brother hasn’t even graduated yet, and he starts applying too. This can be enough to trigger that tinge of jealousy in you.

Even though your brother hasn’t got a job yet, your mind has enough information to alert you by triggering jealous thoughts. Your mind’s like:

“Watch out, bro! Your bro is getting ahead of you.”

Let’s crank it up a notch. When the jealousy triggering information presents a more significant, more real threat than just a hint, you not only get jealous thoughts, but you also get jealous feelings with the package.

For example, if you see your partner flirting with another person, you’re likely to experience that punch of jealous feelings. Your relationship is under threat, and the feelings of jealousy are there to motivate you to make your relationship secure again.

Similarly, when someone shares photos of their fantastic trip on Instagram, you compare their fun life to your boring life and feel sick in the stomach with jealousy. They have what you want, and your jealousy is becoming intolerable.

What do you do with all of that jealousy bubbling up inside you? Your mind is pushing you to take action. Should you?

You come to a point where you can no longer hold your jealous feelings inside of you. You know they’ll eat you up from the inside. You have to vent those feelings. You have to communicate.

For instance, if your partner is flirting with a third person, you may rush to your best friend and communicate your woes. Better yet, you may confront your partner, telling them how it makes you feel.

If your lazy but bootlicking co-worker gets a promotion over you, you may come home to your family and curse their very existence all you want.

Communicating jealousy is perhaps the healthiest thing you can do with it. Having an open and honest conversation about your jealousy can improve romantic relationships.2

There comes a point when it’s too late to communicate. You have to act on your jealousy immediately, or you’ll implode. So, you explode.

At this point, the fire of jealousy often gets mixed with other fuels like anger, inadequacy, hostility, and resentment.

You’re likely to engage in hurtful and abusive behaviors if you’re not careful. You might end up doing something unethical or illegal.

For example, if your partner gets a promotion while you’re struggling in your career, you may yell at them and start fights for petty reasons. In your mind, they’ve wronged you even though they haven’t.

It’s difficult for you to admit that jealousy is driving your hostile behavior.

If your neighbor gets a better car than you, you may puncture it if you lack maturity.

Sometimes, not taking any action is also a way to ‘act’ on jealous feelings.

For instance, if a co-worker you’re jealous of makes a wrong decision, you don’t do anything to stop them because you want them to suffer.

Watch out for jealous behaviors

It’s not every day that we see people acting out of a full jealousy tank. Most jealousy is never communicated, let alone acted upon.

Usually, jealousy starts as a passing thought that one could’ve easily ignored had one understood the evolutionary psychology of the mind. Instead, people grow that initial seed by collecting ‘proofs’ that make their jealousy warranted.

On one not so fine day, you lash out at them and hurt them while your jealousy tank gets filled by over 75%.

Of course, it’s possible that your spouse was indeed cheating. Even then, jealous behaviors can land you in trouble. You may get involved in physical violence, for example.

The best way to deal with jealousy is to restrain yourself from acting on it. Keep it below 75% and always try to communicate before things get worse.

If it’s less than 50%, you don’t even have to talk about it. Just let it pass. It’s probably only a false alarm of the mind.