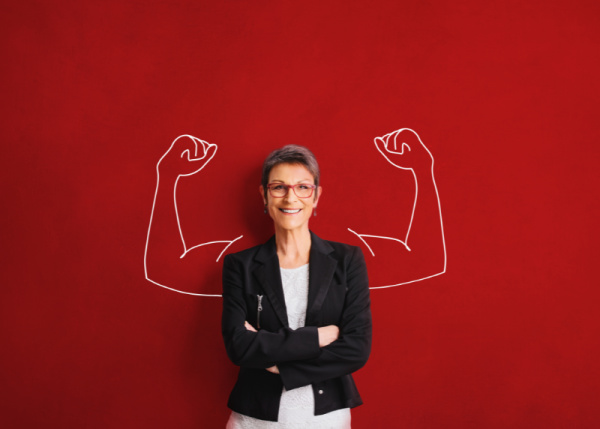 This is why you can spot varying levels of masculinity and femininity even in kids. Some boys are more masculine and aggressive, while others tend to be more feminine and submissive.

Similarly, some girls are more feminine and enjoy playing with dolls while others are more into the masculine stuff.

This isn’t to say that we’re stuck with masculine or feminine behaviors, only that some things come more naturally to us than others. Humans are flexible with their behavior and can strategically display the behaviors that they want.

Let’s look at the physiological and psychological traits of masculine women:

Masculine women have a higher baseline level of male hormones like testosterone. This is reflected in their physiology in several ways.

A masculine woman tends to have a man-like face with square jaws, a prominent jawline, and a large forehead. They’re likely to have thick eyebrows and their face shape is more squarish than roundish. They may also have smaller eyes but larger noses, ears, and chins.

There’s a difference between masculine and feminine gait. Feminine women tend to walk with flowing movements. They keep their arms close to their bodies, sway their hips, and take narrow steps.

Masculine women tend to have a masculine gait. They walk taking wider steps, avoid swaying their hips, and lack flow in their walk. Their walk seems more forced and dragged than graceful.

Like men, masculine women tend to have a deep voice. They talk loudly and often exert verbal dominance on people around them.

One can strategically choose to display behaviors typical of a gender, even if they feel opposite on the inside.

Dominance and aggression are typical male traits that may also be seen in masculine women. These traits make a masculine woman overbearing to others. She may take martial arts classes and even resort to physical aggression when needed.

Masculine women place a great emphasis on being independent and self-reliant. To them, being dependent means being weak.

Unlike feminine women, masculine women are direct in their communication. They’re often praised by their guy friends for being straightforward. They ask for what they want assertively. They’re likely to make the first move on someone they like.

Masculine women tend to be ambitious. They put themselves first and seek to raise their social status. They’re go-getters who get things done quickly and efficiently.

Masculine women are more rational than emotional. They rely less on their intuition and more on analysis. They don’t let their emotions get the better of them.

A masculine woman is likely to be more competitive than the average woman. From getting good grades to getting promotions at work, she may want to beat everyone at everything.

Again, this can be traced back to the variable exposure to male hormones in utero.

At the same time, there are also naturally feminine women who act masculine. They do so strategically to get the benefits of being masculine.

For example, if a woman wants to rise to a position of power, acting like a man can help her be seen as more leader-like. But this has its own downsides.

People expect women to be feminine. When a woman is masculine and overbearing, people experience cognitive dissonance. They’re like:

“She’s a woman, but why’s she behaving like a man?”

This gender deviance of a masculine woman makes people feel uneasy. Not fitting into the social norms makes her too different and people subconsciously see her as an ‘outgroup’ or ‘not one of us’. Being seen as an outgroup comes with the risk of being shunned.

The solution here is to keep her masculine traits to climb up the social hierarchy while offsetting those traits by displaying feminine traits. For example, if a masculine woman who’s a CEO brings her kid to the office, people are like:

“Oh, she’s a woman, after all. She gave birth. Thank goodness.”

The same effect can be produced by displaying more feminine interests, wearing make-up, keeping long hair, and dressing in a more feminine manner.

Powerful women who don’t balance their masculinity with femininity can easily intimidate people.

Since men generally prefer feminine women, masculine women with heterosexual orientation often feel they cannot attract men. They seem to either scare men away or turn them into friends. This can cause a good deal of distress in such a woman.

The easier solution here would be to find a man who can handle her masculinity or strategically display more feminine traits.

A naturally feminine woman who’s forced to be masculine can experience a lot of internal tension and stress as well. Modern society expects women to do everything a man does. This is bound to take a toll. A naturally masculine woman may not experience such tension at all.