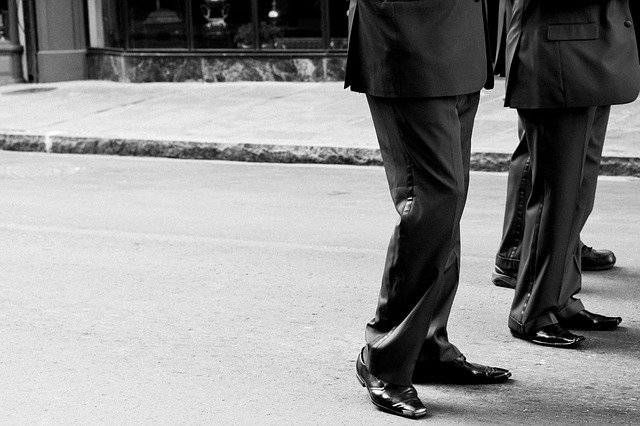 How we think and feel is reflected in the way we stand and in our walking style. This article explores the various nonverbal signals you give off with your standing and walking style.

This is a standing position in which the feet are placed close to each other so that the legs remain unopened. A person who takes up this gesture usually also keeps his hands and arms close to his body.

The subconscious purpose of this gesture is to make oneself appear smaller and claim as little territory as possible.

This gesture is known as the ‘attention position’ because it is commonly observed when someone is listening attentively to a superior.

This gesture is assumed by schoolchildren when they are talking to their teachers or when subordinates are listening to their superiors. It is also observed in soldiers when they stand attentively and listen to a general’s power-packed speech or their national anthem.

In my high school days I don’t know why but in every morning assembly, a physical education teacher went up to the podium and screamed, “SCHOOL! ATTENTION! SCHOOL! STAND AT EASE!” and we were supposed to assume different standing positions based on the command just blurted out. The attention position was exactly the same as described above.

Sure it was poetic to see so many students change their standing positions at the drop of a screaming command but the purpose of such futile exercise still remains a mystery to me. On top of it, they used to whip us if we didn’t assume the ‘proper’ position, as if standing properly could improve our grades or something.

The dominant standing position is the opposite of the attention standing position. Legs are slightly apart and both feet are planted firmly in the ground. It is often accompanied by the hands-on-hips gesture. It is essentially a standing crotch display gesture and that’s why it is mostly observed in men.

The person doing this gesture is clearly showing that he’s unafraid because he’s trying to appear bigger and is claiming more territory. This gesture is commonly observed before fights break out between men. It may also be observed when a senior is angry with his junior and is ready for punitive action.

Pace and style of walking

This is because by making you walk slowly, your subconscious mind is actually trying to slow you down so that you may not be able to reach your destination that you’re afraid of.

A person who fears public speaking may drag his feet as approaches the dais. Similarly, if a friend of yours likes someone but is afraid to approach her, you might notice him slowing down his pace as soon as the two of you approach the girl.

On the contrary, when you are excited and totally unafraid of something, your subconscious mind will have no excuse to slow you down. In fact, it may push you towards your destination by increasing your walking pace.

Fear can also manifest in a person’s walking style in the form of the ‘attention position’ that I described above. That is to say, the person who is afraid may walk with close steps with his arms and legs unopened.

On the other hand, a person who feels unafraid walks in the dominant position, with legs apart and wide steps.

You can tell how close two people are by observing the way they walk together! First of all, the two people who are emotionally close to each other will maintain as little distance between them as possible.

The second important thing to note is whether or not their walking speed is in harmony. Similar walking speed indicates that the two people are in rapport with each other.

So if you notice your best friend and his wife walking whilst maintaining a considerable distance from each other and their walking pace barely matches, almost as if one is trying to escape the other, then it may be a sign that things aren’t going too well between the two.

While I was in college I told a friend that a couple would soon break up. They were both our classmates and had recently gotten into a relationship but I always noticed the above-mentioned signs in their body language. A couple of weeks later the couple broke up!