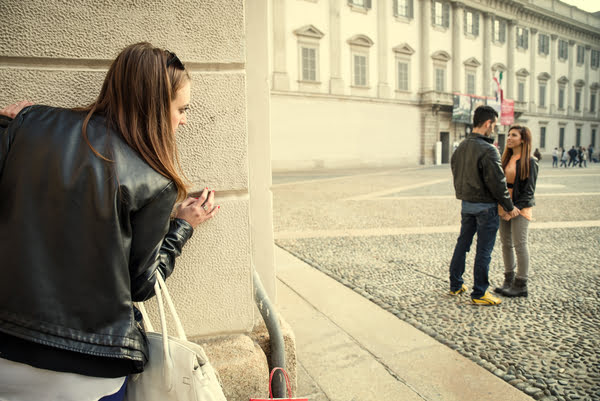 Breakups are hard and what’s harder is seeing that your ex has moved on immediately after the breakup. While you’re still here, grieving over the loss of your relationship, your ex has already started a new relationship.

“Did I mean nothing to them?”
“Was it all fake?”
“Did they ever really love me?”
“Were they putting on an act this whole time?”

If you really loved them and wanted them to be happy, shouldn’t you be glad they moved on quickly?

No, you find yourself miserable and hurting. All those noble-sounding claims of “I’m happy if they’re happy with someone else” vanish into thin air.

The reality is humans are selfish and want the best for themselves. They put themselves first, especially in matters of survival and reproduction.

When you lose a romantic partner, you lose a reproductive opportunity, and there’s no way you can fool your mind into thinking, “I’m happy if they’re happy with someone else.”

I’m not saying you can’t get there. You can, but only when you’ve gained closure and truly moved on. And that usually happens when you find a new relationship i.e. when you secure a new reproductive opportunity.

What not to do when your ex moves on quickly

When you’re hurting because your ex moved on right away, you’re in a vulnerable position. You’re in a negative mental state where your mind tries to discount the entire relationship as fake.

You selectively re-visit bad moments of the relationship and negative things your ex did to ‘confirm’ that your ex never really loved you.

As you can see, this is a very biased and unfair way to look at your previous relationship.

Try not to be selective in your reminisces of the relationship. You’re only painting a negative picture of the entire relationship to reinforce your present mental and emotional state.

You call your ex shallow and claim they haven’t learned from their mistakes. Well, you chose to be in a relationship with this ‘shallow’ person previously. What does that make you?

Different people are affected differently by breakups. People have their own ways of coping. Some take time to recover while others recover quickly.

In fact, those who get into the so-called rebound relationships tend to move on quickly from a breakup. It doesn’t necessarily mean the previous relationship meant nothing to them.

They probably moved on quickly for their mental well-being.

What to do when your ex moves on immediately

Now that you’ve rebalanced your mind and re-visited not just the bad but also the good moments of the relationship, you’re in a better position to gain closure. Be grateful for the time you spent together, and move on.

Think about the reasons why the relationship didn’t work out. Project yourself mentally into the future where you’re back with your ex and have to deal with the same problems that ended the relationship. Do you want it to be your future?

Sometimes, the fact that your ex has moved on to a new relationship can give you the closure you need because you can be sure there’s no chance to get back together.

Often, the reason we’re not able to move on from a breakup is we still think there’s a chance things can work out.

Accept the fact that your ex has moved on. Avoid blaming them, saying bad things about them, and claiming they haven’t grown or healed. They were a significant part of your life, even if you’re not together now.

When your ex hasn’t really moved on

So far, in my discussion, I‘ve assumed that your ex found a new, suitable partner and has really moved on. However, there are instances when your ex hasn’t really moved on from you.

They jumped into the new relationship because they needed temporary relief or they wanted to show you that they’ve moved on.

It’s possible that the hurt you’re feeling now was a deliberate plan of your ex. They knew that you seeing them move on so quickly would hurt you.

I want to reiterate here that this scenario is not likely. If your ex was a good person overall, they wouldn’t resort to these tactics. If they’ve done extreme things in the past to hurt you, you should consider this possibility.

If your ex is trying to make you jealous by showing you that they moved on, there are a couple of things you can look for to confirm that is indeed the case:

There are three reasons why an ex would insist on being friends with you. These reasons are not necessarily exclusive.

The first is that you’re a cool person they still care about you, not enough to be in a relationship but enough to be friends. This is a very enlightened and mature way to handle a breakup, and few people can pull this off.

The second reason is that they want to have options. They think that they can get back together with you if their new relationship fails.

The third, and the most twisted reason, is that they want to rub their new relationship in your face. They aren’t over with you yet and are hungry for revenge. It shows they’re still bitter and want to get back at you.

For instance, when you talk, if they can’t stop gushing about their new partner, you’ll feel it. You’ll feel it when they make a big show of their new relationship on social media, knowing full well that you’re active on the platform and can see their posts.

Even if what they’re doing hurts, appear totally unaffected if you want to drive them mad.

However, you’ll soon realize how ridiculous the entire thing is. Eventually, you’ll get frustrated and end the ‘friendship’ too.

Another way you can tell that your ex hasn’t really moved on is by looking at their new partner. If they lowered their standards for this new partner, it’s likely they jumped on the most accessible option to either avoid the pain of being alone or to make you jealous, or both.

“I can’t believe she chose him. She didn’t even like him.”

This is a good sign of desperation and laying your hands on what you can find for the short term.

Honestly, if you suspect your ex is playing games like these, they’re not worth being in a relationship. They can’t even break up with you properly and with integrity. You can’t expect them to be a good relationship partner with all these immature antics.

Seriously, cut your losses and move on.