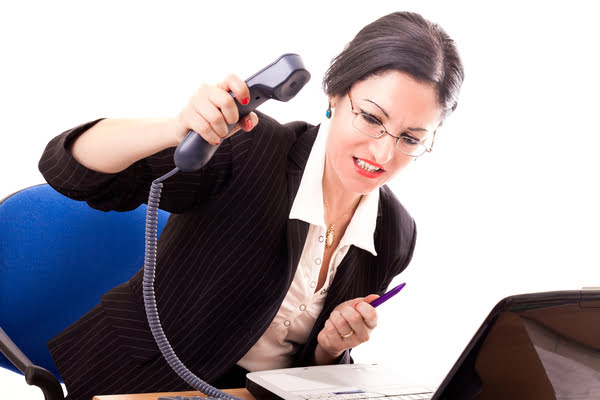 Imagine you’re talking to someone in a room. The other person gets angry over something you say.

How do you know?

You notice the angry stare they give you, their flared nostrils, and clenched fists. They frown for some time and storm out of the room without saying anything, slamming the door behind them.

You know exactly what just happened. You know they were offended by what you said. You accept the reality of the situation. You don’t get mad at them for getting mad at you.

Things get slightly complicated in phone conversations where you don’t have access to non-verbal signals. If someone hangs up the phone on you- the telephonic version of storming out the room- you’re likely to be unsure what happened.

What triggered them?
Did they get angry?
Or were they just in a hurry?

Why hanging up on someone is disrespectful

All humans have a fundamental need to be seen, heard, and validated. When others acknowledge our presence and listen to us, they validate our existence and make us feel good and important.

The opposite is also true.

This is why hanging up the phone on someone abruptly is extraordinarily rude and disrespectful. When you do that, you’re communicating:

“I don’t respect you enough to listen to you.”

Why isn’t someone barging out of a room as painful as someone hanging up the phone?

In the room example I gave above, you could pinpoint why they were triggered. Thanks to the non-verbal signals. Pinpointing a reason this way helps you remove yourself from the situation. It allows you not to take things personally.

“They deliberately hung up the phone to hurt me.”

It may be true but it’s a false positive if the other person had no such intention.

You may feel hurt due to the intention gap and misattribution created in telephonic conversations. But once you figure out their non-malicious intent, you can stop feeling bad.

For instance, if someone hangs up on you, you can simply ask them why they did that the next time you talk to them. If they say something like “I was in a hurry” or “My signal broke”, you’ll get over it.

When you’re talking to someone, and you have to hang up or attend another call, it’s always best to give some warning that you’re going to leave the conversation. A simple “Bye” or “I’ll talk to you later” can make a huge difference. These warnings won’t make the other person feel like you’ve left them in the dust.

It’s all about power dynamics

Now let’s talk about the juicy stuff: Situations where someone intentionally hangs up on you.

Why do people do it?

The person who hangs up gets a temporary rush of empowerment, and the victim feels unheard, unimportant, distanced, defeated, and abandoned.

We all know instinctively how important it is for people to feel important. So, when we make them feel unimportant, we’re hitting them where it hurts.

Every situation is different. To understand why someone hung up on you, you have to look at the context of that situation.

People usually try to gain power when they’re made to feel powerless.

Say you’re arguing with your partner, and you say something they don’t have an answer for. They feel powerless when they can’t hit you back with a retort. They feel like you’ve won.

What do they do to regain power?

They hang up the phone.

And when it bothers you that they’ve hung up the phone, they seal their victory.

Intentionally hanging up the phone on someone is nothing but an attempt to regain power. The question you should ask yourself in such situations is:

“What did I do to make them feel powerless?”

If all you did was share an alternative viewpoint, this behavior is their problem. They can’t handle disagreements.

But if you did something to hurt them, don’t be surprised if they try to regain power.

For instance, if the argument goes out of control and you start hurling insults at them, hanging up the phone may not just be a way for them to regain power but also to regain mental peace.

What to do when someone hangs up on you

If they’re someone you don’t care about, don’t pick up their call again. You want to avoid telling these people how their behavior made you feel because they simply don’t care. If you do, you’ll give them the satisfaction that they could overpower you.

When it comes to people who care about you, you may want to avoid talking to them for a while. This will give them space to realize their mistake. It’ll teach them that they can’t just brush off this behavior and expect you to be normal with them.

If they don’t own up, the next thing you can do is confront them. Tell them how their behavior made you feel disrespected in a non-threatening manner. If they care about you, they’ll apologize and do their best not to repeat the behavior.

Before I hang up on you

If this behavior occurs rarely, it’s probably unintentional, and you should try not to get mad. Ask them why they hung up on you in a calm, neutral tone.

If this behavior occurs regularly, it could point to some deeper issues. Chances are, something that happened to them in their past makes them feel powerless regularly. They’re trying to deal with their trauma by taking it out on you.

Maybe their parent cut them off frequently in conversations, and now they’re modeling that behavior.

Maybe they got away with doing whatever they wanted, so they don’t feel accountable for their actions.

Whatever the reason, you can always make them conscious of their behavior via communication and see where you can go from there.