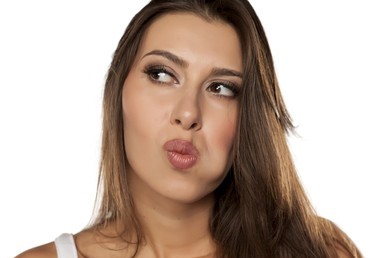 In body language, the ‘tongue pressed against cheek’ facial expression occurs when a person’s tongue presses against the inside of their cheek on one side of the face.

As a result, their cheek bulges noticeably on the outside. This facial expression is subtle and usually lasts for only a fraction of a second.

Where and how the tongue presses against the cheek can convey different meanings. We’ll get to that bit later.

This facial expression is rarely done in isolation, so its meaning often depends on accompanying gestures and facial expressions. Developing a habit of looking for multiple body language signals before jumping to a conclusion is always a good practice.

Since this is a very subtle facial expression, you need to pay special attention to context and accompanying gestures. Following are the possible interpretations of this gesture:

People press their tongue against their cheek when they’re thinking about something- when they’re assessing something in their environments. For example, a student who gets stuck in a tough math problem may make this expression.

Another example would be a stuck programmer who makes this face when staring at their code, trying to figure out where the error lies.

If assessment is mixed with skepticism, the person may raise one eyebrow as an accompanying facial expression. For example, when a potential customer hears an exaggerated claim made by salesperson, they may press their tongue against their cheek like this woman:

Similarly, if an assessment is mixed with surprise, the person may raise both their eyebrows as an accompanying facial expression. For example, while looking at a picture of a particularly attractive person.

Planning and decision-making also require lots of hard thinking. So, during these times, this facial expression is likely to occur. Also, it can occur when a person is mulling over a poor decision.

When making a difficult decision or in times of uncertainty, the person’s tongue will often rub their cheek up and down repeatedly. It can also signal anxiety and is the equivalent of how we sometimes tap our fingers when waiting for something important.

The tongue is often pressed against the cheek when one is being humorous. With an accompanying smile and sometimes a wink, the person making the facial expression conveys:

“I was being ironic. Don’t take what I just said at face value.”

The person making this facial expression often looks at the other person to check their reaction to the joke or irony.

Duper’s delight occurs when you’ve successfully duped someone. For example, when you lie and they believe your lie, you may press your tongue against your cheek briefly.

This facial expression can also signal contempt for the other person. The reason behind the contempt could be anything ranging from their gullibility to their inferiority.

What’s really happening is that the person moves their tongue over their lower or upper side teeth. It only appears they’re pressing their tongue against the cheek. There’s little actual pressure on the cheek.

Our teeth are our primitive weapons. When people are offended and feel threatened, they lick them this way to prepare for biting the opponent.

Look at how the guy without glasses makes this facial expression when accused of doing fraudulent work.

Like some other body language gestures and facial expressions, this facial expression has made its way into verbal communication. The earlier meaning of the expression “tongue-in-cheek” was to show contempt for someone, in line with one of its interpretations.

Nowadays, the expression means being ironic and humorous, again, in line with its one, albeit common, interpretation.

If you say something tongue-in-cheek, you intend it to be understood as a joke, even if you say it in a serious tone.

When you say something satirically, you say it in a tongue-in-cheek manner. Satire isn’t always immediately obvious and many people miss it. Satire becomes obvious only when what’s being said becomes unrealistic or utterly ridiculous.

Here’s one of my favorite clips from The Onion, one of the most popular satirical digital media companies.