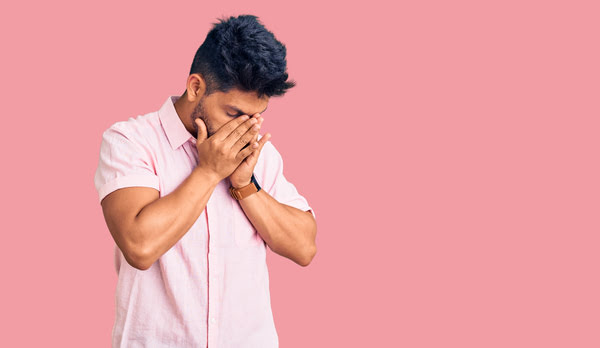 “Failure is the stepping stone to success!”
“Success is failure turned inside out!”
“Don’t be afraid to fail!”

They keep repeating these messages because they’re telling the truth. Also, because they’re constantly up against a deep-rooted tendency of the human mind- the tendency to feel crappy when you fail.

Unless you’ve totally internalized positive beliefs about failure, you will feel bad when you fail. It’s going to happen. Sure, you’ll think about or listen to something motivational to recover, but there will be something to recover from.

Humans are social and cooperative mammals. In any cooperative group, the worth of each member is determined by their contribution to the group. Hence, we derive our self-worth mainly from the value we add to society.

We don’t want to do anything that makes us look bad.

All the advice and wisdom around failure must be repeated endlessly because your emotion-driven subconscious mind cares a lot about your social standing.

The loss of social status induced by failure is the main reason we feel bad when we fail. I mean, think about it: Would you feel like a failure and be ashamed of your failures if you lived alone on an island?

Feeling like a failure is a whole package that comes with powerful emotions like shame, embarrassment, anger, disappointment, and fear– shame being the big one.

These feelings alert you to a loss of status that just occurred in your life. Your mind wants you to fix whatever it is that went wrong. More than that, it wants you to stop and quit embarrassing yourself.

And that’s what we do.

When we fail, we tend to stop doing what we’re doing almost immediately. Some people are so humiliated that they can’t wait to leave the scene.

When that happens, the work of ‘feeling like a failure’ is done. Further loss in status and respect has been curtailed. Now we can go back to the drawing board and figure out how to look good to people again.

I just gave you the psychological mechanism behind the hundreds of success stories you hear.

The main problem people face when it comes to failure is identifying with their failures. When they fail, they think they’re at fault. Something is wrong with them.

When they fail over and over, they see failure as a stable trait, not a temporary state. This is at the root of why failure is so hard.

But why does it happen?

Well, because others do it too!

When you see someone fail, you’re likely to judge think they’re a failure. You may even judge them, but you don’t want to be judged when you fail. This ridiculous and hypocritical aspect of human nature goes back to how we’re social species.

Our ancestors had to make quick decisions about the value of their group members. If they took too long, for instance, to decide if someone was a good hunter or not, they wouldn’t survive.

These judgments helped them make quick survival and reproduction-enhancing decisions. They couldn’t afford to waste too much time reasoning about these things. In fact, the rational part of the brain evolved much later.

Judging a book by its cover was a quick and valuable evolutionary strategy to prevent costly survival and reproduction mistakes.

Hence, people tend to attribute what’s really an event (failure) to personality. They take failure personally and make it a part of their personality.

Some tendencies in people contribute to their feeling like a failure or make it worse. Let’s go over these tendencies and how to cope with them rationally.

Can we stop for a moment and ask the kid what they want?

The poor kid grows up with this burden of others’ expectations and feels like a failure upon failing to meet them.

This also applies to adults.

New year comes, and people are like, ‘I’m going to conquer the world this year!’.

When we soon find out that we haven’t conquered the world, we feel like a failure.

You can have unrealistic dreams, but you have to have practical goals. If you set reasonable and achievable goals, you’ll be happy when you see evidence of progress.

Instead of aiming for six-pack abs next month, how about you set a goal of losing 10 pounds?

Perfectionism is a cursed word in the world of entrepreneurship, and for a good reason. If you strive to make things perfect, you’ll waste time and may never get there. You’ll end up feeling like a failure.

Perfect is the enemy of the good, and all you need is good. Trying to be perfect is setting yourself up for failure. As successful podcaster John Lee Dumas said in a book, “You have to have disgust for perfectionism.”

Upward social comparison i.e. comparing yourself to others who’re better than you comes naturally to humans. It is what drives the grass is greener syndrome and the emotion of jealousy.

Comparing yourself to others and being envious motivates you to get to their level. It’s not entirely a bad thing. But most people, instead of feeling inspired, feel jealous. Compared to their own, the other person’s high status makes them feel low status and powerless.

People engage in this status game all the time on social media. They see someone posting about their fabulous life. They feel less than and post something about their own incredible life.

It’s naïve to think that people only share their successes on social media to share their excitement or inspire others. There’s always this dark side of human nature that drives this behavior. The dark side that desires superiority over others and wants to make them look bad.

This game is never-ending because hardly anybody experiences the awesomeness of life all the time. We all go through the ups and downs of life. Also, nobody can be good at everything. Nobody can have it all.

No matter how good you are, there will always be someone better. You can’t compete with every single quality, hobby, or interest of every person you know.

Instead of falling into this comparison trap, how about we focus on ourselves and figure out what we need to do to get to the next level?

When somebody rejects us, they don’t see us as valuable enough to be with us or do business with us. Value loss equals status loss, and we feel like a failure.

Getting rejected is a sign you’re trying which is better than not trying.

Impostor syndrome occurs when you’re valuable to everyone around you except you. You feel like a fraud and worry that people will find out about you. You feel undeserving of the status and success you’ve reached.

Imposter syndrome is triggered when we exceed our own expectations. You have to remind yourself that if you were really undeserving, you wouldn’t be where you are.

6. Fighting against your nature

Human nature is powerful and shapes almost everything we do. It has millions of years of evolution behind it. Often, that’s impossible to overcome with mere willpower.

This is why bad habits are so hard to overcome. When we remain stuck in our bad habits, we feel like we’ve failed.

You know that chocolate chip cookie is terrible for you, but your mind simply can’t resist it. Your mind loves calorie-rich foods because they helped with survival in ancient times.

If you want to make a positive change in your life, you can leverage your powerful nature.

For example, you have to remove all unhealthy foods from your surroundings to eat healthy. It’s much easier to avoid temptation than to resist it.

Similarly, you can leverage your mind’s love for dopamine by rewarding yourself when you accomplish your goals.

Getting good at anything worth getting good at takes time. Many people keep trying different things without attaining mastery in any one of them. Being the Jack of all trades and master of none decreases confidence.

Master one or two things and learn the basics of other essential things. When you master something, you lift yourself above the crowd (status gain). Your confidence increases.

When you have a lot to do and there are a hundreds of things pulling at your attention, you get overwhelmed. Overwhelm paralyzes you and makes you slip back into bad habits. It leads to losing a sense of control and feeling like a failure.

When you get overwhelmed, you need to step back from your life to get a big picture view of your life. You need to make adjustments and re-organize things. Instead of doing nothing, even a small act like making your bed can make you feel better.

That feeling of getting a small win will prevent you from feeling like a failure.

A limiting belief is a belief that limits your potential, making you believe that you can’t do things. It stems from not doing things and from our past experiences.

Constant criticism and shaming from parents, teachers, and other authority figures can make you internalize limiting beliefs.

This is perhaps the hardest challenge to overcome on this list, but it can be done. The key to damping all those voices is to give your subconscious mind enough proof that they’re wrong.

You have to step outside of your comfort zone and do the things that your limiting beliefs say you can’t do. That’ll work like pouring water on fire.

A great way to avoid taking failures personally is to analyze them. Analysis of failure is necessary if you are to learn from it. Otherwise, you won’t make progress.

Ask yourself what happened. Describe it in detail. Then ask why it happened. Often, you’ll find that the reason it happened had nothing to do with you as a person.